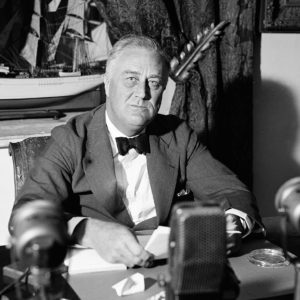 The way Democrats tell it, Donald Trump has desecrated the White House with cheap, campaign politics by using its hallowed halls for his Republican presidential nomination acceptance speech and videos.

In fact, the Democrat-controlled House Oversight Committee launched an investigation into whether Trump’s decision to speak from the White House lawn Thursday night is a crime — a potential violation of the Hatch Act, according to House Oversight Chair Carolyn Maloney (D-N.Y.)

Democrats claim that Trump’s behavior is unprecedented. In fact, the very Democrat who lived in the President’s House the longest established the precedent.

Franklin D. Roosevelt’s wheelchair was pushed into the Diplomatic Reception Room just after midnight on July 19, 1940.

It was his favorite place in the Executive Mansion for speaking to the American people via radio. Many of his famous Fireside Chats were delivered there. Four years later, it would be the location where he would lead the country in prayer on the night of the D-Day invasion of Europe. And there would be countless other remarks in between.

But Roosevelt wasn’t talking to all Americans that particular summer night. He was addressing a very specific group. When cued to begin talking, the president started with these words: “Members of the Convention — My friends …”

From there he went on to accept the Democratic nomination for the third consecutive time, a first in presidential history. Some 700 miles away, delegates were listening via a special radio hookup, which was considered hi-tech for its time.

After formally accepting the nomination and thanking the delegates for the opportunity to be their standard bearer yet again, Roosevelt went on to lay out the foundation for his campaign against Republican Wendell Wilkie that fall.

It was easy to understand why he was speaking from the safety of the White House. He was the first president to attempt to break George Washington’s tradition of no third term.

While the party bosses were firmly in FDR’s camp, his aides weren’t 100 percent certain that grassroots Democrats would be. So, out of an abundance of caution, they kept Roosevelt at home rather than having him accept the nomination in person as he had done in 1932 and 1936. (Another campaign first, by the way.)

When all was said and done, Team Roosevelt had nothing to worry about. FDR was easily re-nominated on the first ballot. And he went on to win that record-shattering third term in an electoral landslide.

So, what about Trump’s convention videos shot in the White House premises make Democrats huff? Surely that’s a first, right? Once again, it isn’t.

Consider a campaign video from the 1984 election. In it, President Ronald Reagan is standing on the South Lawn. He turns, gestures to the White House seen over his shoulder, and begins with these words: “This place has a way of making us think about the kind of future our young people will have. Everything we do here, we weigh on tomorrow’s scales.”

Reagan not only used the White House premises for a purely partisan purpose, he even incorporated the historic mansion into his message.

The 43 men (sorry, Mrs. Clinton) who have occupied the White House were keenly interested in, and deeply involved in, party politics. It should come as no surprise then that many of its residents had no qualms about being political as well as presidential while there as well.

“You can’t take the politics out of politics,” the old saying goes.

And life at 1600 Pennsylvania Avenue proves it.