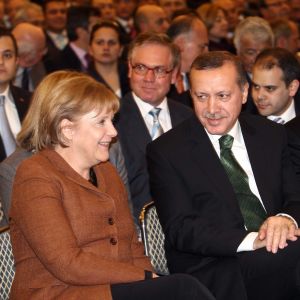 Turkey in NATO? No

When U.S. officials first approached Turkey about joining NATO, the Turkish government was enthusiastic. Thousands of Turks were fighting alongside American forces in Korea. It was “imperative that democracies work in complete harmony, without competition among themselves or differences in policy objectives,” the U.S. ambassador to Turkey reported in a top-secret memo that Turkish Foreign Minister Mehmet Fuat Koprulu told him.

Less than a month later, on February 18, 1952, NATO welcomed Turkey in its first expansion.

For the United States, it was a diplomatic triumph. Turkey became one of only two NATO members to border the Soviet Union. At the height of the Cold War, it allowed the United States to base nuclear missiles on its territory. Turkey became NATO’s second largest army. Today, it has more men under arms than Germany, France and Great Britain combined. Even after the Berlin Wall crumbled, Turkey stood alongside the United States, Israel and other Western democracies in the fight against terror.

Turkey may have objected to the 2003 Iraq War — a sentiment with which most Americans now agree — but it took a leadership role in the war in Afghanistan. Surely, with such history, Turkey belongs in NATO, right?

Turkey in 2016 is fundamentally different than Turkey of just a decade ago. NATO is not simply a defense alliance, but a coalition of shared values in which democracies really do work together. Whereas once diplomats might have hoped that Recep Tayyip Erdogan, Turkey’s leader, might have been a hiccup in an otherwise productive relationship, more than a decade of his rule has changed Turkey for good.

Whereas once the Turkish army was a bastion of secularism and pro-Western sentiment, now Erdogan’s ideological compatriots dominate. Not only did Erdogan handpick many of the top generals by arresting on dubious charges those whom he suspected did not share his religious agenda, but also any officer from major on down rose through the ranks under Erdogan.

Erdogan has turned Turkey’s foreign policy on its head. Whereas Turkey once stood with Israel, not only does it now stand by Hamas, a group blacklisted in the European Union and designated a terrorist group by the United States, but Erdogan has threatened to use Turkey’s membership in international bodies to block Israel at every opportunity. Differing assessments about Israel are welcome; holding NATO hostage to an entirely Turkish spat is something else entirely.

Alas, both Turkish bluster and sympathy toward terror have become the rule rather than the exception. Hakan Fidan, Turkey’s intelligence chief, is closer to Iran than the United States. In September 2011, Egemen Bagiş, Erdogan’s right hand man, threatened to use the Turkish navy — the largest indigenous force in the Eastern Mediterranean — to attack an American company exploring for gas in Cypriot waters.

“This is what we have the navy for,” Bagiş declared. “We have trained our marines for this; we have equipped the navy for this. All options are on the table; anything can be done.”

The sheer number of vigilante attacks has led the U.S. Navy to avoid Turkish port calls.

In short, Turkey has become Pakistan on the Mediterranean, denouncing terror while simultaneously sponsoring it. And as for that cooperation in Afghanistan? Turkey has erected billboards and spread around aid in order to bolster Islamic solidarity, hardly NATO’s mission.

The problem with NATO is that it is a consensus-driven organization. If even one of its 28 members decides to block a decision, NATO is effectively paralyzed. As, Erdogan — who declared his goal to be “to raise an Islamic generation,” becomes both more mercurial and authoritarian, he has transformed Turkey into a liability.

Expelling Turkey from NATO is easier said than done. There are no provisions in NATO to strip countries of their membership. In 1966, France withdrew from the NATO Integrated Military Command Structures, but that was voluntary; it rejoined in 2009. Likewise, Greece — which had joined NATO on the same day as Turkey — withdrew on its own accord from the military command structure in 1974 after Turkey’s invasion and occupation of northern Cyprus, but it too rejoined the alliance after six years.

Perhaps at the very least, Turkey needs a time out. The viability of the NATO depends upon it.

Michael Rubin ([email protected]) is a resident scholar at the American Enterprise Institute.