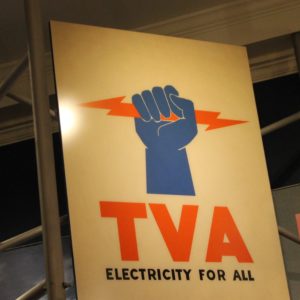 But there has been a significant struggle underway over an unfinished nuclear power plant in Hollywood, Ala., and nary a word of it has caught national media attention. Even in the area affected by this trial, served by the giant Tennessee Valley Authority (TVA), coverage has been modest. The importance of new green energy hasn’t been raised, which is the back story here.

The bench trial (before a single judge) which opened in Huntsville, Ala. on May 16 and concluded three days later involves the two units of TVA’s Bellefonte nuclear plant.

A year later, TVA declared the plant surplus to its needs and put it up for sale. This attracted just three bidders and a purpose-specific company, Nuclear Development LLC, won. It was the high bidder at just $111 million. Two lower bidders both planned to cannibalize the plant and ship parts to other plants, some abroad.

TVA accepted the Nuclear Development bid without reservation, or none was expressed. According to Nuclear Development, the company went ahead inventorying the plant and doing customary due diligence prior to the deal closing after two years.

When the deal was to close in November 2018, TVA asked first for a two-week extension and then scrapped the deal, claiming the purchaser had failed to get the necessary licenses transferred from the Nuclear Regulatory Commission, as required by the Atomic Energy Act. The judge has already affirmed this much in a pre-trial opinion.

TVA told me in a statement, “Nuclear Development had two years to obtain the necessary Nuclear Regulatory Commission approval to transfer Bellefonte’s NRC-issued construction permits. Nuclear Development failed to obtain NRC approval before closing, making it illegal for TVA to close the sale.”

Bill McCollum, president of Nuclear Development, told me that the license issue wasn’t raised in the time from the sale in 2016 to the abrupt change of heart on the verge of signing in November 2018. NRC hasn’t been a party to the trial and neither has any other federal agency. After the cancellation, Nuclear Development immediately sued for breach of contract.

The dispute is important in the national context with the Biden administration straining to end carbon emissions from electricity generation and the two units of Bellefonte representing between them 2,700 megawatts of clean green power.

There is some controversy over the state of completion of the plant, but Unit 1 is put at 88 percent by the purchaser and Unit 2 at around 58 percent.

McCollum knows the plant: A career nuclear engineer, he was the chief operating officer at TVA until he retired in 2011. Previously, he served for 33 years in the highly respected Duke Energy nuclear program.

Nuclear Development is owned by Franklin Haney of Chattanooga and his family, who have amassed a fortune in real estate development in Tennessee and around Washington, D.C.

Creative financing has been Haney’s specialty, and he had devised a plan to finish the Bellefonte plant using private funding and federal tax credits and loan guarantees. He first shared this possible plan with TVA in 2013 — so it has been long-germinating.

Haney had worked with TVA on creative financing for another nuclear project. He was a known quantity to TVA.

Purchaser sources believe that TVA pulled back when it realized that Nuclear Development wanted to sell its electricity output from Bellefonte to the City of Memphis, TVA’s largest customer, at a discount. Otherwise, it could have made the sale contingent on the license transfers.

In my years of writing about TVA, it has always been a nuclear champion and keenly aware of its social responsibility, having been born in the New Deal.