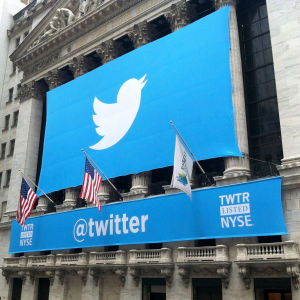 The Twitter logo is shown in front of the NYSE on November 7, 2013 in New York.

Between January 1 and June 30, 2015 Twitter saw a 52 percent increase in requests for user account data from law enforcement — the largest the company has seen yet compared to the latter half of 2014, according to the report.

“As has long been the trend, we continue to see a rise in the number of these requests,” Jeremy Kessel, Twitter’s senior manager of global legal policy, wrote in a blog post Tuesday. “Notably, requests for account information have increased 52 percent, which is the largest increase between reporting periods we have ever seen, with removal requests and copyright notices growing by 26 percent and 11 percent respectively.”

In the second half of 2014 the company received a global total of 2,871 requests and provided information for 52 percent of the total, meaning Twitter shared information with governments in 6 percent more cases in the first half of 2015. The company reports the majority of those requests are made in conjunction with ongoing criminal investigations.

Twitter began releasing transparency reports in 2012. Requests in the first half of 2015 affected 78 percent more users than the second half of 2014.

The U.S. made more than half of all requests globally with more than 56 percent, while Japan came in second with 10 percent and Turkey making the third-most at 9 percent. Requests by the UK comprised 7 percent of the total.

Twitter also released the number of times governments asked for content to be removed from the social media platform, including 442 court orders and 561 requests globally — a 26 percent increase over the latter half of 2014. Most of those requests came from Russia and Turkey, and typically involve content posted in violation of those countries’ law.

The company received 14,694 copyright infringement takedown requests and counter notices on Twitter, and another 3,766 on video streaming and sharing platforms Periscope and Vine. Twitter complied with takedown requests in 67 percent of cases.

In a first for transparency reports, the company released trademark violation notices — 12,911 of which the company reported for Twitter and Vine. Seven percent of those violations were removed.

In another first the company reported which email services provide what — if any — type of encryption when emailing tweets. Of major U.S.  services, Gmail, Hotmail, Outlook, iCloud, Live.com, Me.com and MSN.com all received top marks for securing, verifying and encrypting emailed tweets (providers are graded on their implementation of StartTLS, which Twitter uses to encrypt inbound and outbound emails, and ensures emails from Twitter have not been read in transit).

Overall, 94 percent of messages from Twitter to other providers are encrypted in transit.