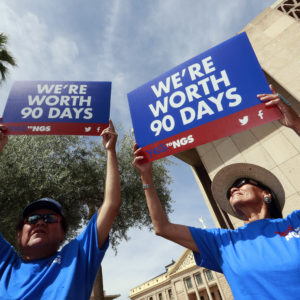 Two Steps Forward, One Step Back for Attempts to Save the NGS

The clock is ticking for the Navajo Generating Station, the largest coal-fired power plant in the West, and a major employer for the Hopi and Navajo tribes. On Wednesday, supporters rallied outside of the Arizona Capitol, calling on the Central Arizona Project (CAP), a massive water infrastructure program, to commit to a 90-day pause on pursuing alternate power suppliers. In effect, the pause would require that the CAP buy power from NGS. It would also give the tribe time to try to work out other ways of keeping the power plant, and the mine that supplies it, afloat. Right now, the plant is slated to close at the end of 2019 and keeping it open would require both that a new owner be found and for CAP to agree to continue purchasing the power the project generates.

“We’re worth 90 days,” said Hopi Chairman Timothy Nuvangyaoma.  “The Hopi are pleased Interior has stepped up to remind the board of the legal covenants that govern them.  The bottom line is, let’s slow this process down, answer important questions, and give the prospective new owners some time to deliver.”

“The Navajo Nation supports a 90-day pause on the process to purchase power from sources other than NGS,” he said.  “We should continue to work to find solutions to keep the plant operating while supporting both the Navajo economy and families.”​

The days are valuable, since a Chicago company announced on Thursday that it was interested in potentially purchasing the plant. Middle River Power, subsidiary of the hedge fund Avenue Capital,  owns five power plants in Virginia, California, West Virginia, and Maryland. Middle River Power is in the process of doing due diligence on the purchase, but it isn’t clear if there will be enough time for a sale if the planned 2019 closure is kept.

“We are very disappointed that the Board voted against lower cost power, hundreds of Native American jobs, and the economic future of the Navajo and Hopi people,” said Sydney Hay, chairman of the YES to NGS coalition, which is working to save the plant. “We don’t understand why the Board would deliberately execute a more expensive power agreement when the Department of Interior has called into question its legal authority to even consider taking power from other sources. Nor do we understand why would it take an action that it knows will negatively impact tribal families. Lives depend on these operations.”

The Interior Department also believes that the plant can and should be kept open. Last Friday, Tim Petty, assistant secretary for water and science, sent a letter to the CAP, arguing that a 1968 law authorizes NGS as a source of power for the CAP.

“While the department recognizes that many circumstances have changed since passage of the 1968 act, including enactment of the 2004 Arizona Water Settlements Act, it currently believes that the 1968 act remains the applicable governing authority and must be addressed in any decision relating to future sources of project power,” the letter from Petty reads.

The Interior Department owns a quarter of the plant and, since the federal government constructed the CAP, it may have some leverage over its continued operation as well. Thus far, Interior Secretary Ryan Zinke has opted to take a backseat approach to the issue, but in light of CAP’s decision and President Trump’s reiterated commitment to supporting coal generation, this might change.

CAP is already facing lawsuits from the Hopi Tribe, the United Mine Workers of America, and Peabody Energy.

The road ahead for the NGS is still rocky. Continuing to operate past 2019 would require not only a new buyer, but also environmental approvals, new lease and coal contract negotiations, and potentially millions of dollars in forgone maintenance.