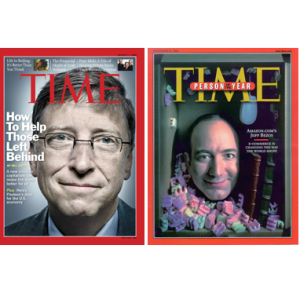 For most of the past 30 years, Bill Gates has been known by most people as the co-founder of the world’s largest software company, a tough business tactician, and the richest man in the world. But Gates now finds himself at the intersection of the business world and philanthropy. He helps run one of the world’s largest private foundations, the Bill and Melinda Gates Foundation, and he’s taken a lead role in encouraging other wealthy individuals to be generous with their fortunes.

Just last week, Warren Buffett donated $2.8 billion in Berkshire Hathaway stock to five charities, with the vast majority of that money going to the Gates Foundation. Buffett is continuing to follow through on the Giving Pledge that he and Gates launched in 2010, encouraging wealthy individuals and families to give most of their wealth to charity. Buffett has now donated nearly $23 billion of his fortune, but Gates leads the way in total charitable giving with $28 billion.

In reviewing the list of those who have signed the Giving Pledge, one will find a lengthy compendium of famous entrepreneurs—many from the tech industry: Mark Zuckerberg, Pierre Omidyar, Elon Musk, Larry Ellison, Paul Allen, Reed Hastings, Dustin Moskovitz, and many more. While there are a number of wealthy tech entrepreneurs who have not signed, one of the noticeably absent names from that list is Amazon founder Jeff Bezos. He’s worth $30 billion and is the 20th richest person in the world, but he stands in stark contrast to Gates not only as a business rival from the same city, but also because Bezos has demonstrated over the years that he’s not very supportive of charity.

Microsoft and Amazon are companies closely identified as extensions of their founders’ personalities, and when it comes to philanthropic giving, that largely seems to be the case. Both companies are located in the Seattle area, along with other top corporations, such as Starbucks, Costco, and Boeing. But among this group, it’s Amazon that is singled out locally for the lack of support it gives the community. The Seattle Times published a lengthy profile in early 2012 that featured the voices of many community and charity leaders disappointed with Amazon’s lack of involvement. When other Seattle companies are donating large sums, Amazon is often missing in action.

Even one of Amazon’s top charitable initiatives, AmazonSmile, has faced criticism for its ineffectiveness. Amazon offers to give 0.5% of any purchase to a charity of one’s choice. In a sense, customers can feel good about buying more from Amazon, even though the sum donated is paltry. But from the standpoint of social exchange theory, this interaction, which encourages larger purchases, also discourages charitable giving from the shoppers themselves.

Microsoft, for its part, has donated $6.5 billion since 1983 in cash, services, and software to non-profits around the world. The company matches up to $15,000 annually of any charitable giving from its employees. The company even pays charities to let Microsoft employees volunteer.

Bezos’ personal giving faces as much criticism as Amazon’s. When Bezos purchased the Washington Post last year, the Post itself noted concern from Steve Delfin, CEO of America’s Charities, that the paper may reduce its philanthropy under Bezos’ leadership, stating: “Jeff Bezos’s footprint in philanthropy is smaller than one might think given the size and scope of his personal wealth.” This wasn’t the first time Bezos and Amazon have faced criticism from a publication associated with the company he would later buy. A 2009 article in Slate, which at the time was part of the same company as the Washington Post, was titled, “The New Scrooge.” It went so far as to state: “There are lemonade stands that donate more to charity” (referencing Alex’s Lemonade).

Bezos and Amazon do make some donations. The Seattle Times noted that the company has given $1,000-$10,000 to a number of local charities, and Bezos donated $10 million for an innovation center at Seattle’s Museum of History & Industry and $15 million for a center at Princeton named after him.

Bezos’ parents, Miguel and Jacqueline, started the Bezos Family Foundation in 2001. But according to Inside Philanthropy, Jeff Bezos has not contributed any funds to the foundation.

Bezos and his parents do seem to share some interest in education funding. That is the key focus of the Bezos Family Foundation, and Bezos himself has given at least $800,000 to support a charity founded by a former employee that distributes e-readers to poorer regions of the world. In theory, this may be one area of shared philanthropic interest between Bezos and Gates. The Gates Foundation has focused vast resources on improving education in the United States.

Interestingly, despite Bezos’ relative philanthropic absence, the newspaper he owns has been highly critical of Gates’ charitable investments. On June 7, a Washington Post reporter published a 3600 word exposé disparaging Gates’ efforts to improve American education policy. The report noted that Gates “bankrolled” and became “de facto organizer” leading to “one of the swiftest and most remarkable shifts in education policy in U.S. history.” Afterwards, the Post’s education blogger derisively wrote three times in two days about Gates’ role. All the while, they have omitted the obvious fact that their boss – Mr. Bezos – mostly opts out of charitable investments.

None of this should be taken as outright criticism of either Bezos or Amazon relative to the good deeds of Gates and Microsoft. Bezos abides by a different philosophy, telling PBS’ Charlie Rose in a 2010 interview: “I’m convinced that in many cases, for-profit models improve the world more than philanthropy models, if they can be made to work.”

Milton Friedman, for one, may agree. He wrote in an oft-quoted New York Times column that “the social responsibility of business is to increase its profits.” Friedman, however, also believed that philanthropy had a great social purpose when performed by individuals, who were, of course, free to choose.

Gates perhaps offers a third market-oriented view. Earlier this year, Gates spoke at the American Enterprise Institute and was asked by Arthur Brooks whether capitalism and charity are mutually exclusive. Gates explained that innovation is driven by private enterprise. The Gates Foundation works closely with for-profit pharmaceutical companies and agricultural companies, but the Foundation helps bring about innovation and distribution of these products to areas of the world that otherwise could not afford such innovations. It is through the free market, however, that such innovation is possible.

Two tech titans, who otherwise would seem to have much in common, see philanthropy in different lights.