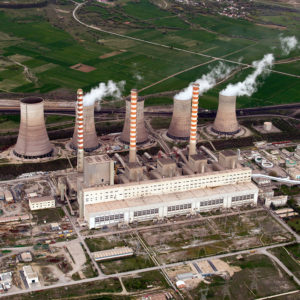 China runs on coal. Without it, China never would have achieved the staggering economic growth of recent decades.

But China is envisioning a new, emissions-free future, proposing to achieve net-zero emissions by 2060. Whether or not China succeeds could very well come down to the work currently happening in U.S. labs and the seriousness of the U.S. government to advance breakthrough fossil fuel technologies.

While the U.S. and China have become rivals, on the issue of environmental progress and emissions reduction the two countries are best served through cooperation.

U.S. efforts to reduce emissions will be for naught if China — and other countries — don’t do their part. But China, and so many other nations, need cost-effective emissions-reduction technologies for the fuels they use now and will continue to use well into the future.

China relies on coal for nearly 60 percent of its electricity, using half the coal the world consumes each year.  Despite a decline in U.S. coal use, global coal production and consumption is growing from year to year, with virtually all of the increase centered in China, India and Southeast Asia.

In fact, China is continuing to add new coal plants that are built to last for 60 years or more so anything built today will be around for decades.

The question is: How can China burn more coal and still expect to meet Beijing’s environmental goals?

It’s a tricky balance, riddled with incongruities and contradictions. For global decarbonization to succeed, however, China must be included in the battle against global warming. Otherwise, its emissions will continue to rise, no matter what other countries decide to do.

And China will need access to an advanced technology for capturing coal and natural gas emissions that’s being developed primarily in the United States. Known as carbon capture use and storage (CCUS), it’s still in its infancy but could make a huge difference.

With CCUS, carbon emissions from coal and natural gas plants are condensed and transported to disposal sites, then pumped underground into geological formations and depleted oil and gas wells.

To offset the cost of CCUS, some of the carbon is being used for enhanced oil and gas recovery or to make reinforced concrete and other products. Experts say that such productive uses of carbon have barely scratched the surface of what’s possible.

According to the Global Carbon Capture and Storage Institute, there are 19 operating carbon capture facilities worldwide.

While several dozen more facilities are in development, the institute projects that 2,000 carbon facilities will need to be up and running by 2040.

That’s why the International Energy Agency, time and again, gives such prominence to CCUS. IEA Executive Director Fatih Birol made that clear when he told the Senate Energy and Natural Resources Committee earlier this year.

“If I had to pick one technology as the most critical, if I had a magic touch to make this technology mature and (gain) market share,” it would be carbon capture.

It’s no surprise that CCUS is the foundation of the Department of Energy’s high-priority CoalFirst program, which is aimed at building small modular coal plants with near-zero emissions that can be replicated for use worldwide.

In the years ahead, such emissions-reduction technologies that work with existing coal and natural gas plants will be essential.  For now, then, the best path forward for the United States is to acknowledge the importance of cooperating with China in the effort to achieve decarbonization.

Coal remains the world’s leading fuel for electricity generation and global energy consumption is only growing. Whether or not U.S. environmentalists are willing to admit it, coal will remain a foundational piece of the world’s energy equation well into the future.

U.S. energy and emissions leadership will be achieved not by turning the nation’s back on coal and the nation’s coal workforce but rather by developing and demonstrating the essential technologies that will be the linchpin of a globally replicable emissions-reduction strategy.