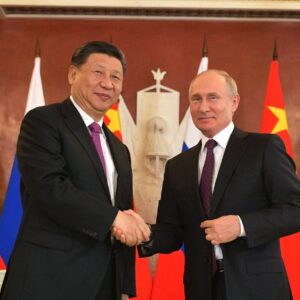 “In a triangle with three countries, you don’t want to be the one opposite the other two.”

Should their interests combine, America could face a greater military and foreign policy threat than during the Cold War. That’s the view of former CIA analyst Andrea Kendall-Taylor of the Center for a New American Security.

Many American and European foreign policy professionals believe a Russian invasion of Ukraine — beyond the Ukrainian territory it already controls — is all but inevitable. And China-watchers say once the Beijing Olympics are over and the nation holds its Communist Party National Congress in the fall, Taiwan is likely to face a direct threat as well.

Gordon G. Chang, author of “The Coming Collapse of China,” thinks Americans should be more concerned.

“Defense experts are not as worried about China and Russia as they should be,” says Chang. “We should not be surprised because they have not been particularly concerned for a long time.”

Chang says the experts focused too much on the things that divided Beijing and Moscow rather than the issues that could unite them.

“Those dividing interests will almost certainly prevent an enduring partnership over time,” Chang concedes. “But we should not care about what their relationship will be like a century from now. We should care about their effective alliance now (because) in the here and now, the pair is working closely against us and the international system.”

Since signing a memorandum of understanding for military cooperation, China and Russia have engaged in multiple joint defense exercises. In 2018, Russia invited China for the first time to its largest annual defense exercise. A year later, they held their first-ever joint bomber patrols along the Korean Peninsula, drawing warning shots from South Korean pilots.

The two nations have also increased their economic cooperation. Bilateral trade between China and Russia reached more than $120 billion in 2021, a significant increase from 2020 despite the impacts of COVID. And the newly-completed Power of Siberia pipeline is expected to send  1.3 trillion cubic feet of Russian natural gas to China by the year 2025.

China and Russia are so close now that Chang considers them the New Axis. The question is, what are they after?

“I doubt that China would invade Taiwan this year given that Beijing has the Olympics next month and President Xi Jinping has his hands full trying to manage Omicron, the economy, and the upcoming Party Congress meeting later in the year,” says Zach Cooper, a Senior Fellow in Foreign and Defense Policy at American Enterprise Institute (AEI). “The real worry is how China and Russia help each other in terms of technology-sharing and by posing challenges that make it hard for the United States to focus on one region at a time.”

Cooper acknowledges concerns about a simultaneous Ukraine and Taiwan invasion scenario, but he thinks that is an incredibly low likelihood event this year.

“We will see lots of diplomatic coordination and some defense technology cooperation, but I don’t expect deep operational trust between the two militaries, and I think the two sides are working on different timetables,” says Cooper. “Russia wants action now in Ukraine (but) China likely does not want to get into a fight over Taiwan this year, so I think the coordination will continue, but it will be of a different sort than some are suggesting the last few weeks.”

Chang’s fear is that a foreign policy misstep could result in a two-front challenge to the West.

“Once either China or Russia, intentionally or accidentally starts a conflict, the other could act, either in coordination or on its own, taking advantage of the situation,” says Chang. “So, let’s say China starts a conflict with Taiwan, Japan, the Philippines, or India. Russia could move against Ukraine.”

The Biden administration has yet to lay out a strategy for confronting either nation or driving a wedge between them. Biden was elected touting his extensive foreign policy experience, but in the wake of the Afghanistan withdrawal fiasco, Biden’s foreign policy approval ratings are underwater with the American people.

“Neither Xi Jinping nor Vladimir Putin seems to be particularly impressed with the United States at the moment,” says Chang. “Deterrence is breaking down.”

When it comes to what each nation brings to the table militarily speaking, Cooper says China is ahead in some areas.

“We certainly have a set of programs that are developing various hypersonic capabilities, but China already has conventionally-armed ballistic missiles with anti-ship capabilities, so it has an edge there,” says Cooper.

“China is at least a half-decade ahead of us in hypersonic technology, probably more like a decade,” says Chang. “Once, in the 1960s, the United States was the world leader in hypersonic flight (but) we did not develop the tech in the hope that we could entice Beijing and Moscow into similar restraint and, in short, we deluded ourselves about the nature of the Chinese and Russian regimes, (so) Americans should be furious at their policymakers.”

Chang also sees a slight advantage for China when it comes to artificial intelligence.

“China is certainly ahead of us in quantum communications.”

Quantum communication is defined by research and development company PicoQuant as a field of applied quantum physics closely related to quantum information processing and quantum teleportation.

“It’s most interesting application is protecting information channels against eavesdropping,” says PicoQuant in a webpage on quantum communication.

In terms of undersea capabilities, Cooper believes the U.S. has a clear lead. The same with space and cyber, generally speaking.

“We have perfected carrier flight operations, which the Chinese are just getting comfortable with, but China has quantity, which as the saying goes can have a quality all its own,” says Cooper. “So, we may be ahead in many areas, but China may not need to be our equal to pose serious problems since in many areas it will likely field more systems at less expense than the American military.”

America is also using high-tech training like the Synthetic Training Environment (STE) Live Training System to give U.S. pilots the ability to train against the fighters and weapons used by China and Russia in a virtual “real world” experience.

“The more realistic our training the better prepared our forces will be, but this is hard to observe for the opponent,” says Cooper. “So this may be more helpful in a war-fight than for deterrence purposes.”