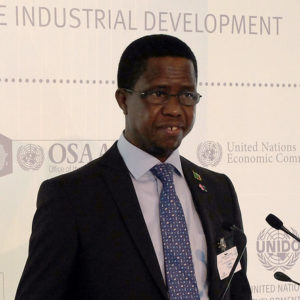 Edgar Lungu, President of Zambia, speaks during a high-level event in New York, 26 September 2015
[IS] Opinions

What does it matter if a U.S. ambassador runs afoul of the administration in a piddling African country where the inhabitants suffer chronic poverty and bad government?

It so happens it matters a lot.

Here is the story: One of our most experienced ambassadors, Daniel Lewis Foote, with a distinguished diplomatic career, often in hot spots like Afghanistan, Iraq and Haiti, criticized the administration and the justice system of Zambia, a landlocked country in Southern Africa, for sentencing a gay couple to prison for 15 years for having sex. Zambians, who are committed Christians with a fundamentalist slant, were approving. Foote said he was horrified.

The president of Zambia, Edgar Lungu, joined the fray. Homosexuality, he told a British interviewer, was unbiblical and unchristian. Foote, who felt he had been badly treated as a diplomat since his arrival in 2017, was having difficulty in meeting with Lungu despite the $500 million a year the United States gives Zambia in debt-free assistance.

Then Foote, who also had been seething, apparently, over blatant corruption by Lungu and his family, published on the internet a strong indictment of the Lungu administration.

That was too much for the Zambians.

The government made the dispute with the United States public and stirred up the people. Lungu said Foote had to go and, amazingly, the State Department agreed without struggle and Foote was ordered back to Washington.

In his statement, Foote had laid out the situation clearly, “My job as U.S. ambassador is to promote the interests, values and ideals of the United States. Zambia is one of the largest per capita recipients of assistance in the world, at $500 million each year. In these countries where we contribute resources, this includes partnering in areas of mutual interest and holding the recipient government accountable for its responsibilities under this partnership.”

Lungu’s response to Foote’s statement was clear, too, “We do not want him here.”

And the State Department conveniently obliged, even while regretting that the government in Lusaka, Zambia’s capital, had effectively declared Foote “persona non grata.”

The effect across Africa and in other small nations may be to embolden them to silence ambassadors. Lungu has kicked sand in the eyes of the mighty United States and we have run. American values will not be on the table.

Tibor Nagy, the assistant secretary of state for Africa, tweeted lamely, “Dismayed by the Zambian government’s decision requiring our Ambassador Daniel Foote’s departure from the country.”

Yes, there is room for dismay; and it is dismay with the way this issue has been handled in Washington. A stellar career ambassador appointed by President Donald Trump has been pushed out of his post by a government that has been dependent on foreign aid both in cash and advice. Foote also pointed out in his statement that the “American people have provided more than $4 billion in HIV/AIDS support in the last 15 years. Working closely with the Ministry of Health, we currently have well over 1 million Zambians on life-changing antiretroviral medicine, touching close to half of the families in the country.”

If things had gotten too sticky for Foote to continue in Lusaka, he could have been reassigned and a new ambassador appointed. One way or another, he should not have been put in the position of leaving at the behest of Lungu, who is trying to drive Zambia back toward the kind of authoritarian government that has bedeviled it since independence from Britain in 1964.

During the height of the Cold War, Zambia had some strategic importance to the United States as a major producer of copper. Since then the economic fortunes of Zambia have risen and fallen with the copper price and attempts to diversify the economy have faltered. Tourism, dependent largely on the Victoria Falls and recreation on the world’s largest water impoundment, the Kariba Dam, called Lake Kariba, is faltering because of persistent drought leading to historical low flows in the Zambezi River.

Over the years Zambia has done better than, say, neighbor Zimbabwe, where bad government has destroyed the once-prosperous country and reduced it to a kind of subsistence existence without so much as a national currency. Zambia has never been as rich as Zimbabwe was at its independence in 1980, but it has managed somehow to survive.

In his statement, Foote saluted the warmth and friendliness of the Zambian people. In my experience, he is right. I lived in Zambia for a while many years ago and the people were tops. As a very young journalist, I interviewed Zambia’s first president, Kenneth Kaunda, when he was a young independence leader. He is now 95.

Kaunda, too, was to have his problems with diplomats. He curbed the press, but he loved press conferences and he ordered the diplomatic corps to show up and ask friendly questions. That did not go too well either.