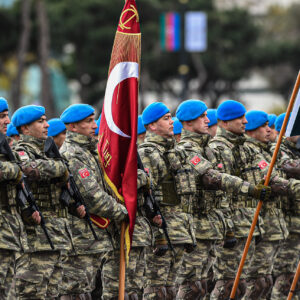 Turkish weaponry is helping Ukrainian troops fight off Russia’s invasion of their homeland. TB-2 drones are confirmed to have struck Russian targets. Yet Turkey’s Deputy Foreign Minister Yavuz Selim Kiran underscored that Ankara did not provide those drones to Kyiv as military aid, saying, “They are products Ukraine purchased from a private company.” That is indicative of the delicate balancing act Ankara has pursued between Russia and NATO in the Ukraine War, which provides an opportunity for the U.S. to alter that dynamic and bring Turkey and its defense industry back into the NATO fold.

As we show in our recent Foundation for Defense of Democracies report, Engines of Influence: Turkey’s Defense Industry Under Erdogan, Turkey’s drift away from NATO and pivot towards Russia under the rule of Turkish President Recep Tayyip Erdogan was most apparent in Turkey’s arms purchases and sales. Turkey’s arms imports fell by 59 percent in 2016-2020 in comparison to 2011-2015, with an 81 percent drop in imports from the U.S. accounting for a large portion of the decline. At the same time, Turkey purchased the highly advanced S-400 air-defense system from Russia, which led Washington to impose sanctions against Turkey and suspend its participation in the F-35 joint-strike fighter program.

The indiscriminate use of Turkish drones and subsequent civilian casualties in conflicts like Syria, Libya, Ethiopia, and Nagorno-Karabakh, led to Western embargoes on drone components. That prompted Turkey to seek out a new partner – Ukraine. Russia’s invasion of Ukraine and targeting of Ukrainian defense production enterprises risk leaving Turkey without its leading defense partner for manufacturing its drone engines.

Thus far, there have been some signs that the Erdogan government, increasingly concerned about the Kremlin’s irredentism, is reconsidering its relations with Russia and tilting back towards NATO. Turkey supplied Ukraine with additional TB-2 drones in the first week of the war, likely infuriating Moscow, and voted in the United Nations to condemn Russia. Since Turkey has a significant trade and energy dependence on Russia, Erdogan still feels the need to pursue a balancing act, most evident in Ankara’s abstention in the Council of Europe’s February 25 vote to suspend Russia. Similarly, the Erdogan government chose to shut the Turkish straits not only to Russian warships but also to NATO warships under the 1936 Montreux Convention, eliciting Moscow’s commendation.

In the past week, there has been discussion of an arrangement in which Ankara would provide the S-400 system to Ukraine in return for access to U.S. Patriot missile batteries and reinstatement to the F-35 program. As a testimony to Russia’s enduring sway over Turkey, Erdogan ruled out any such deal on March 25. Hence, bilateral efforts should focus on the provision of additional Turkish weapons to Ukraine, such as the Kargu-2 loitering munition and TRLG-230 multiple rocket launcher.

The Russian invasion of Ukraine has thrown a wrench into Erdogan’s NATO-skeptic foreign and security policy, making cooperation with Russia significantly less attractive. On the one hand, the Ukraine war is a historic opportunity to return Turkey into the NATO fold and to strengthen efforts to assist Ukrainians in defending their homeland. On the other hand, if the Kremlin succeeds in installing a puppet regime in Kyiv, the existing Turkish-Russian defense cooperation might extend to cooperation with Ukrainian defense industries under Russian tutelage, an undesirable outcome.

The high stakes should give the Biden administration and other Western leaders urgency to implement a concerted transatlantic strategy involving not only incentives and disincentives to encourage Turkey’s pivot away from Russia and toward NATO, but also the provision of greater economic and military aid to Ukraine.

Aykan Erdemir is senior director of the Turkey program at the Foundation for Defense of Democracies and a former member of the Turkish parliament. Twitter: @aykan_erdemir. He wrote this for InsideSources.com.

Ryan Brobst is a research analyst at the Center on Military and Political Power at the Foundation for Defense of Democracies. He wrote this for InsideSources.com