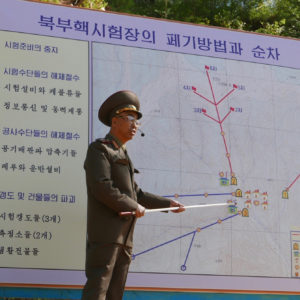 The Deputy Director of North Korea's Nuclear Weapons Institute, who would not give his name, briefs reporters about the dismantling of North Korea's nuclear test site, in Punggye-ri, North Hamgyong Province, North Korea, Thursday, May 24, 2018. (APTN via AP)
[IS] Opinions

President Donald Trump ignited another firestorm of controversy with his shock decision to call off his summit with Kim Jong-un as planned for June 12 in Singapore.

At the same time, the possibility lingered that he might still go back to a summit. Inside his administration, key figures clearly differed on the wisdom of Trump meeting Kim.

The hand of Trump’s hawkish national security adviser, John Bolton, was obvious in Trump’s letter to “Chairman Kim” in which he said it would be “inappropriate” to meet in Singapore considering the “tremendous anger and open hostility” displayed in a letter from North Korea’s foreign ministry denouncing Vice President Mike Pence as “ignorant and stupid.”

Analysts thought, however, that Secretary of State Mike Pompeo was still hoping to resurrect the process of rapprochement, including a Trump-Kim summit.

Underlining the sense that Pompeo was at odds with Bolton, the secretary talked on the phone Friday with South Korea’s foreign minister, Kang Kyung-hwa, telling her he is hoping it will be possible to “create conditions” for a meeting between Trump and Kim while South Korea vowed to implement the agreement reached by South Korea’s President Moon Jae-in and Kim in their summit at Panmunjom on April 27.

U.S. analysts were also attempting to figure out what to make of North Korean negotiator Kim Gye-gwan’s aggrieved comment that he was “surprised” by Trump’s decision and still hoped for a Trump-style solution.

Kim Gye-gwan’s comment bore no resemblance to the strong language of a statement that he had issued last week denouncing the United States’ adopting a strong no-compromise position on demands for complete, verifiable, irreversible denuclearization. He also denounced Bolton for having suggested in an ABC News interview that North Korea might follow the Libyan example under which Libya’s former leader Moammar Gadhafi agreed to give up his nuclear program almost before it had begun.

Bolton said North Korea would have to give up not only its warheads but the facilities at which they were produced, presumably including the plutonium reactor at its main nuclear complex at Yongbyon. That comparison upsets North Koreans for two reasons: First, Libya had yet to produce a nuclear warhead while North Korea has fabricated between 40 and 60, and, second and most important, Gadhafi was killed in the bloody revolution that wiped out his regime eight years later.

Pence doubled down on the Libyan comment in an interview on Fox, reminding the North Koreans of what had happened to Gadhafi. The implication was that Kim might meet a similar fate if he failed to cooperate with Trump on denuclearization. He failed to note, however, that Gadhafi had cooperated on giving up his program, remarking that Trump had made clear the nuclear standoff with North Korea “will only end like the Libyan model ended if Kim doesn’t make a deal.”

Another North Korean vice foreign minister, Choe Son-hui, apparently speaking for the government, wrote the statement that led to Trump’s decision, saying she could not “suppress my surprise at such ignorant and stupid remarks gushing out from the mouth of the U.S. vice president.”

Libya, she noted, had only “installed a few items of equipment and fiddled around with them,” while North Korea is “a nuclear weapon state.” Pence, she said, had “spat out nonsense” as had Bolton by saying that North Korea “would follow in Libya’s footstep.”

Choe did not say, however, that Kim wanted to cancel the summit. Instead, she appeared to threaten the United States by writing that it was for the U.S. to decide whether to “meet us in a meeting room or encounter us at nuclear-to-nuclear showdown.”

Trump appeared to be responding directly to this when he noted that America’s nuclear stockpile was far bigger than that of North Korea while praying “to God” that they would never be used.

The American  president, however, did leave open the possibility for a future summit. “If you change your mind having to do with this most important summit,” he wrote, “please do not hesitate to call me or write.”

Within the Trump administration, some of Trump’s advisers were urging that he switch to a soft line in response to the surprisingly mild, conciliatory statement on Friday from Kin Gue-gwan. Not so fast, he seemed to be saying, there is still room for discussion: “We express our willingness to sit down face to face with the U.S. and resolve issues anytime and in any format.”

Indeed, he added, Trump’s decision underscored the animosity between the United States and North Korea, making a Trump-Kim summit all the more urgent.

North Korea would even consider a Trump-style solution to the denuclearization issue. “We were surprised” and felt “a deep shame” as a result of Trump’s decision, said the North’s state media.

U.S. officials, from the State Department to the White House, were at a loss to figure out what to make of the North Korean response when analysts in general had expected a bitter diatribe. In the unending story of the standoff on the Korean Peninsula, said one analyst, “you never know what to think.”