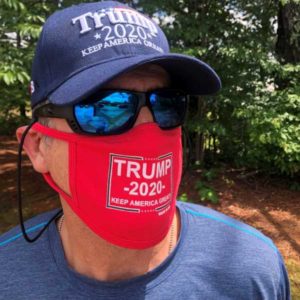 MANCHESTER, N.H. — Homeowners in the quiet New Hampshire towns of Milford and Brookline are receiving threatening letters for publicly supporting President Trump. “You have been identified by our group as being a Trump supporter. Your address has been added to our database as a target when we attack should Trump not concede the election,” the letter reads.

“We recommend that you check your home insurance policy [for] adequate coverage for fire damage,” the letter added.

Those threats were anonymous. But Democratic and progressive leaders in the Granite State have been open about labeling Trump backers either “racist” or supporters of white supremacy. And they’re hardly alone. From violent attacks on their homes to harassing diners during their meals, Trump supporters have been targeted across the country.

It’s a continuation of the “deplorables” attack Democrat Hillary Clinton and her allies used four years ago.

“You cannot be a leader on racial justice and support Donald Trump,” Feltes said.

A local Black Lives Matter activist who also served on Gov. Sununu’s Commission on Law Enforcement Accountability agrees with that assessment. “Donald Trump is racist. If you still need to be convinced of that fact in 2020, you’re either also racist, due for some serious self reflection, or both,” Ronelle Tshiela tweeted.

From getting the finger for wearing a MAGA hat to being called a bigot for backing the president’s re-election, Trump’s supporters have gotten the message: Keep your politics to yourself.

“You’re not supposed to threaten my home. I’m very worried in the sense that this is going on in my town,” one of the homeowners who received a threatening letter said. She would only give her first name, Kelly, out of fear.

And that fear is being felt in the polls.

A new Granite State Poll, conducted by the University of New Hampshire Survey Center, found more than two-thirds (68 percent) of Trump supporters said they are reluctant to put a Trump sign in their yard because they’re worried their house may be vandalized. A similar number won’t put a bumper sticker on their car for the same reason. And nearly half — 45 percent — say they don’t talk about their support for Trump with their friends or co-workers, either.

This fits a national trend, in which Trump voters simply aren’t willing to tell strangers — or even family and friends — they are supporting the president. A recent InsideSources poll of the Philadelphia suburbs, for example, found that while just one third are supporting Trump, 47 percent said they know a friend or co-worker who plans to vote for him but is keeping it secret.

Given the political and media climate, is it any surprise that Trump voters are shy? The question for pollsters and pundits is whether the “spiral of silence,” as the UNH Survey Center describes it, is enough to change the election’s expected outcome.

“There could be a hidden Trump vote, but the number of undecided voters is lower this year,” said David Paleologos, director of the Suffolk University Political Research Center. “There are fewer third-party voters, too, which suggests the ‘shy’ vote will be less impactful.”

Emerson University’s director of polling Spencer Kimball isn’t on board, either. “I don’t think there’s a ‘shy’ vote, rather undecided voters who will break late,” he told InsideSources.

Then again, on November 3, 2016 — exactly four years before the 2020 election — Politico ran a story based on Morning Consult polling with the headline: “‘Shy Trump’ Voters Are a Mirage.”