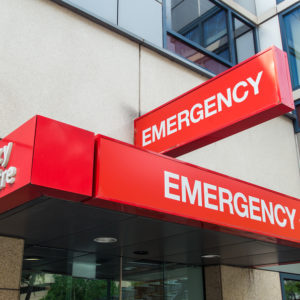 An anxious ER nurse in Los Angeles took to Facebook recently to ask whether any of her colleagues nationwide were experiencing layoffs because hospital emergency rooms are virtually empty — one of the most surprising unintended consequences of the coronavirus crisis.

“This doesn’t seem to be talked about at all… People are losing their shifts and paychecks and jobs,” the L.A. nurse wrote. “We only had 5 people in the whole ER when they sent me home. My agency sent out an email blast basically saying that there are a lot of people struggling to find shifts.

“So, I’m curious if any other nurses are experiencing this?”

More than 140 responses from across the country were posted on the Facebook private group page “All-ER nurses.” Most were concerned about diminished hours — or having no work at all — and the economic distress that would follow.

“I work in a free-standing ER and a surgery hospital ER. Both places are sending people home,” wrote a Texas nurse. “It is really stressful and I am tempted to search for another job.”

News of nearly-empty emergency rooms may come as a surprise to most Americans amid media reports of a national healthcare system pushed to the brink. The reason, as counterintuitive as it may seem, is the coronavirus itself.

First, COVID-19 cases are immediately secured elsewhere in the hospital without entering the ER, segregating the infected patients from the hospital population. At the same time, fears of the virus are discouraging some people who might otherwise go to the ER for a relatively minor medical issue to stay home. Studies show that many Americans, including more than half of Millennials, use ERs or emergency care facilities for non-emergency care.

The majority of comments acknowledged their ERs were empty and they were concerned about their futures. The only nurses that seemed to feel “safe” were those who work in high-impact COVID-19 areas such as New York, New Jersey and California — but the majority of those also said they were worried about the future.

And apparently those hardest hit are ERs in rural and smaller hospitals, according to the L.A. nurse who said that though her hospital could hardly be considered in a small area, she was aware that many smaller “facilities are struggling to stay afloat.”

“Yes, nurses in central NH small hospitals being called off. They can call in each morning and see if they are needed,” wrote a New Hampshire nurse. “They have to use PTO [paid time off]. It’s very unfair.”

And it’s not just ER nurses that are suffering the consequences of empty emergency rooms.

A doctor, who described himself as a physician in a western state on lockdown, posted the following on Reddit: “Make of this what you will, but I think this crisis is making people think twice about whether an ED visit is really necessary.”

In Boston, emergency room doctors at Beth Israel Deaconess Medical Center have been told some of their accrued pay is being held back, according to the Boston Globe. More than 1,100 Atrius Health physicians and staffers — who operate in conjunction with hospitals in eastern Massachusetts — are facing reduced paychecks or unpaid furloughs.

These financial cutbacks have generated an uproar from doctors and nurses who are already working exhausting shifts in demanding working conditions because of COVID-19.

An ER nurse who works in Northern Virginia and asked not to be identified, told InsideSources that his emergency room has been like a ghost town for weeks. He called his shifts the easiest of his career.

“The only thing there is more of in the ERs right now is free food,” he said, referring to the food and other gifts community members are dropping off in support of hospital staff.

“Yes, we are dealing with some COVID-19 patients,” he said. “It’s just not nearly the war zone the media is making it out to be.

“As far as the amount of actual people in the ER, I don’t know if I’ve ever had a census this low three weeks in a row. Every shift is half empty.”