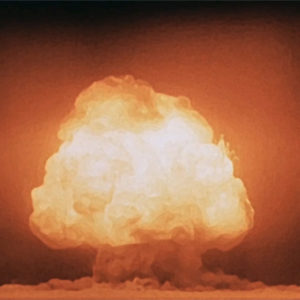 One of the problems with politicians, they propose solutions on subjects they know very little about. Recently there were two new ideas put forth by the administration using nuclear weapons to break up and stop a  hurricane and another for ending a war.

Both of these ideas are unrealistic, but where did they come from? Possibly from seeing too many reruns of  “Star Trek” and crafted their concepts accordingly? In “Star Trek,” Captain Kirk gives the order, “Scotty, make ready the Atomic Krypton torpedo, will knock out that storm.”

One hurricane releases more energy than all the nuclear weapons ever created. Using one to stop a hurricane is like a gnat trying to stop an elephant.

Unfortunately, besides a big blast, there are other effects that will adversely affect human life: light, flash, electromagnetic, electrical and heat pulses, and let’s not forget radiation fallout.

People looking east when this “Atomic Krypton Bomb” is exploded will probably go blind from the white light searing their retina. This will be accompanied by a heat pulse, starting fires, burning clothing onto the skin and for many roasting them alive. About the same time, a sizable electromagnetic pulse stretching to the horizon will couple into the electrical power grid transmission lines burning them out, no more lights. Also generated is an electrical pulse, killing electronics, dropping planes out of the sky, stopping cars and making electronic gear at home, hospitals and industry great paperweights. That’s immediate, then comes the blast.  For those still surviving, rain containing radioactivity will eventually kill them or make them very sick.

In the other atomic bomb consideration, I believe the quote was, “I can kill 10 million people in Afghanistan if I wanted.” Yes, that’s true, along with all the Americans in and around the area. An atomic or thermonuclear bomb does not act as a surgical bullet. Afghanistan has a population of 30 million, 10 million are located in about 25 cities spread throughout the country.

To kill that many people will require at least 25 nuclear weapons of all sizes. Aside from all of the secondary effects discussed above, that many weapons could produce a “nuclear winter” in the area and surrounding countries. Further, the radiation fallout will probably devastate the whole country killing most of the remaining 20 million and drastically affecting all the nearby countries. That’s why the United States and Russia have decided that no one wins in a nuclear war, mutual deterrent!

Nuclear weapons are not “energy bubbles” that can be plopped down as constrained havoc. We don’t live in a “Star Trek” program! There are “Unintended Consequences!” Politicians must understand science, weather, environment and all the associated effects before they even suggest such solutions.