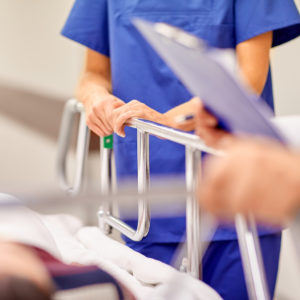 A healthcare company agreed to reverse an earlier agreement that allowed a major union to organize workers that didn’t vote for it, according to a settlement released Tuesday.

Kathleen Flanagan has worked as an assistant physical therapist within the nonprofit healthcare network Northwell Health. She filed an unfair labor practice complaint against the company and a healthcare union over a deal that allegedly forced workers into unionization. The deal was reversed according to the announced settlement.

The SEIU United Healthcare Workers East had already unionized various groups of employees within the healthcare network. Flanagan alleged that the deal allowed the union to expand to even more workers without giving them the chance to vote. The National Right to Work Foundation (NRTW) has been assisting her in the legal challenge.

“Thanks to Kathleen Flanagan, a power-grab by union officials was successfully halted and reversed,” NRTW president Mark Mix said in a statement. “To protect workers across the country from being forced into unwanted unions, the Trump NLRB should overturn this outrageous accretion doctrine.”

Flanagan recently retired from the physical therapy department at the Long Island Jewish Medical Center. Her department was among those within the healthcare network that was not unionized. A Northwell Health representative then informed her that the union bargaining unit expanded into her department November 2017.

The workers were essentially added into the union bargaining unit without a vote. The unfair labor practice complaint also added that a union official unlawfully told the workers they were required to join the union and pay full union dues by the start of the year. Flanagan then filed her complaint Jan. 23.

The NRTW called the deal a “backroom agreement” which imposed unwanted union representation on workers. Flanagan, according to the group, was even pushed into early retirement as a result of the deal. She would have been required to accept union representation, pay nonmember fees, and accept a reduction in benefits if she stayed.

“Our interest continues to be our employees and their ability to make an informed decision regarding union representation,” a Northwell spokesperson told InsideSources.

The SEIU and Northwell settled the charges by agreeing to reverse the earlier deal. Northwell must now cease recognition of the union for workers who didn’t have the chance to vote. The union will also be required to reimburse the union fees that have already been paid.