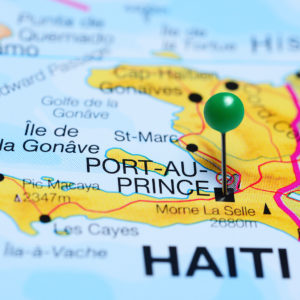 Union Says More Work Ahead After Helping to Save 50,000 Haitians

The Trump administration announced plans Monday to extend a program that protects 50,000 Haitians from deportation. But the fight is not over for one union at the forefront of the issue.

The Haitians have lived in the country with a temporary protected status since their homeland was hit by an earthquake seven years ago. Advocates have fought to save their temporary status which was set to expire Tuesday. The hotel workers union Unite Here says more work is needed with the program scheduled to expire again in six months.

“Folks have responded with mixed emotions around it,” Mike Hill, research coordinator for Unite Here Local 355, told InsideSources. “We’re going to be going through a series of meetings here locally with some local faith leaders, ourselves, other unions, and community folks to figure out what our plans are for the next six months to expand it beyond January. But I think folks feel happy about a short-term reprieve but very committed to figuring out how to do something longer term.”

Local 355, which is based in Florida, became involved early on with the earthquake impacting many of its own members. The union has turned its attention to the temporary status issue in recent months. It has since worked with other advocates, unions, and its national affiliate to bring attention to the issue.

Durazo adds the six-month extension doesn’t feel like a real solution. She notes it’s more like telling the Haitians they have an extra six month to pack their things. Hill says the ideal is to allow them to stay as long as possible, and work to develop pathways so they can stay permanently.

“The ideal, obviously, would be that people could have a long-term permanent solution,” Hill said. “I don’t know how long it’s going to take for Haiti to recover and be able to support folks. I know a lot of our members who are here to work, they send a lot of money back to Haiti. Their extended families are still in Haiti.”

Temporary Protected Status (TPS) allows foreign nationals to stay in the country legally if they are unable to return to their home country safely, or their government is unable to handle the return of its nationals adequately. The Department of Homeland Security (DHS) announced the six-month extension just a day before it was set to expire.

“After careful review of the current conditions in Haiti and conversations with the Haitian government, I have decided to extend the designation of Haiti for Temporary Protected Status for a limited period of six-months,” Homeland Security Secretary John Kelly said in a statement. “Haiti has made progress across several fronts since the devastating earthquake in 2010.”

The situation in Haiti continues to be problematic despite almost a decade of relief efforts. The World Bank reports that the magnitude 7.0 earthquake in 2010 killed up to 230,000 people while causing around $8 billion in damage, at 120 percent of gross domestic product (GDP). The country still faces some major economic challenges.

“The folks that have been talking here locally, obviously, are thinking about going to other countries, not just Haiti, if they were forced out,” Hill said. “One of our members was talking about going to Canada. Folks think about their immediate economic concerns.”

The Haitians with a temporary status face other issues beyond the immediate economic concerns. In the seven years since the earthquake hit, many have settled down to start families and new lives here in the states. Some don’t have families to go back to because they were killed in the earthquake.

“For us, it goes way back,” Hill said. “Our membership was severely affected when the earthquake happened. Many of our folks were panicked, trying to find loved ones, trying to talk to folks back home, trying to figure out what happened. We had members who lost multiple members of their family who died in the earthquake.”

The earthquake became a personal issue for the union from the very beginning. Union officials met to discuss how to help people impacted by the earthquake. Members also united to donate money to the relief effort. The union became involved again several months back to bring attention to the looming temporary status deadline.

“Our members were talking to their employers, encouraging them to take a public stand since they heavily depend on Haitian labor, and its just the right thing to do in general, as well,” Hill said. “Then we had a series of protests, press conferences, and all of that.”

Unite Here organized protests and launched a petition to bring national attention to the issue. The union also joined forced with other advocates like the Haitian Women of Miami and the Florida Immigrant Coalition. Now the union is looking ahead to the next six months in the hope more can be done.

“That’s what we have to figure out,” Hill said. “What we’re going to do now is, tomorrow evening we have a large prayer service in one of the largest Haitian churches here in south Florida. That will be the beginning of the discussion, and then I think a bunch of us are going to spend some time thinking about what does the next six months look like, and how do we keep the pressure up.”

Unite Here represents 270,000 members across the hotel, gaming, food service, manufacturing, textile, distribution, laundry, transportation, and airport industries. The union, in general, has been a vocal supporter of a more open immigration system. President Donald Trump has taken a much stricter stance on immigration.

“We have been greatly concerned with the president’s approach of making everyone a subject of deportation,” Durazo said. “It used to be limited to those that have been convicted of crimes, and now it’s everybody and nobody is safe.”

Trump has promised to better enforce immigration law, and pursue policies that protect domestic workers from unfair foreign competition. The administration has said it will prioritize criminal aliens, but critics have expressed concern over mass deportation, which would include illegal immigrants that are otherwise acting lawfully.

Local union officials and other advocates will start meeting Tuesday to figure out what the next steps should be.