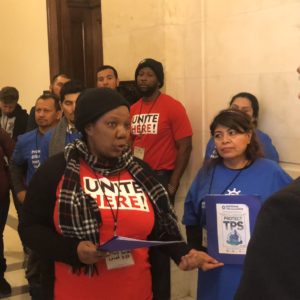 Union Worker Fights Trump in the Face of Deportation

Wilna Destin is a mother and union worker who recently filed a federal lawsuit to save from deportation the thousands of others, like herself, with threatened legal statuses.

Destin was granted legal status to stay in the country almost a decade ago following a massive earthquake that devastated her home of Haiti. She has worked, bought a home, and raised a family in the years since. But now she is among hundreds of thousands who face the threat of deportation with those legal protections being revoked.

The Temporary Protected Status (TPS) program is what has allowed her and immigrants from several other countries to stay in the U.S. legally. President Donald Trump entering office has meant the end of those protections for a large population of immigrants who have lived in the country for years, sometimes decades.

“TPS is my life actually,” Destin told InsideSources. “It’s my life, it’s my kids’ lives, and my husband. I am an American woman with a family. This is my life. My life is in jeopardy but I have to fight to get it back because I’m here and I do everything the government asks me and I try my best.”

The TPS program grants immigrants legal status if they are unable to return to their home country safely. Haiti and three other countries are having their statuses revoked. Those opposed argue that deporting them could be devastating for employers, communities, and families considering how long they’ve been here.

Destin adds that she has a drivers license, pays her taxes, and owns a home. She first moved to the country almost two decades ago looking for work but was unable to return when the earthquake hit in 2010. She isn’t alone. Many others within the program are unable to return to their home countries – often for much longer.

Destin has been fighting back against the administration since early last year with support from her union, Unite Here. A coalition including her union helped file the lawsuit alongside eight other TPS recipients March 12. Destin notes that her fight is about the roughly 200,000 within the program who are now having their legal statuses revoked.

“I became a part of this because naturally, I’m a fighter,” Destin said. “I have two kids who were born and raised here. I have been here for almost 20 years. It makes no sense to change and send me back. This is why I’m fighting this.”

Destin and others like her are at risk of being separated from their families. She has a Haitian husband, but both her children were born in America. The American Civil Liberties Union (ACLU) has warned that the decisions from the administration have created devastating uncertainty for families around the country.

“It’s not only for me,” Destin said. “There are parents just like me. They have kids, they’ve been here for 20 years. I have people who have been here for 30 years. They should be U.S. citizens but TPS is something temporary.”

The ACLU of Southern California, the National Day Laborer Organizing Network, the International Union of Painters and Allied Trades, the National TPS Alliance, and the law firm Sidley Austin LLP are also assisting the TPS receipts in their legal challenge against the administration.

The Department of Homeland Security (DHS) terminated the protected status for receipts from El Salvador, Sudan, Nicaragua, and Haiti. The DHS argued that the conditions in those countries have improved enough to end the protections. The agency is phasing out the protections over the next couple of years to allow for an orderly transition.

The TPS program is meant to be temporary, but advocates argue the situation is different for those that have been here for many years. They assert those families have been here long enough to establish roots and fully integrate into American society. In some cases, advocates assert, their country of origin is still unsafe to return to.

“I was very surprised and emotional about it,” Destin said. “After the earthquake, we know Haiti was devastated and they know that it’s not ready… I was shocked for the administration to say that.”

Destin has renewed hope now that her legal challenge is under way. She sees it as a new weapon to fight back against the administration while drawing attention to their situation. The coalition assisting her and the other plaintiffs are also helpful in their ability to provide resources and legal assistance.

“We have lawyers who support us,” Destin said. “It’s a new weapon and it’s been good. A lot of people hear about it and want to know what’s going on.”

The lawsuit alleges that the administration violated the equal protection guarantees under the Fifth Amendment’s Due Process Clause. It also asserts that terminations violate the Administrative Procedure Act and the due process rights of children of TPS holders who are citizens. The challenge includes five children who have parents within the program.

The legal challenge also argues that the administration has a restrictive interpretation of the program that is unconstitutional since it was adopted to further an anti-immigrant and white supremacist agenda. The lawsuit points to reports that the president referred to countries impacted as “shithole countries.”

Unite Here has been at the forefront of the fight since the administration first started entertaining the idea of ending those protections. The union has organized protests, launched petitions, coordinated with industry groups, and met with lawmakers to save the protected status for these immigrants.

Advocates are hoping to see the protected status of these immigrants extended until the government develops pathways for them to stay permanently. Lawmakers introduced a bipartisan bill Oct. 31 that would allow TPS migrants who arrived in the country prior to January 13, 2011, to claim legal permanent resident status.