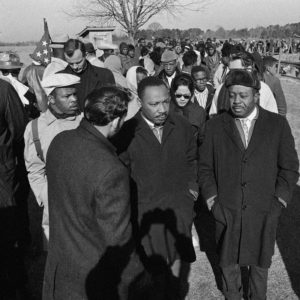 Memphis, Tennessee is attracting crowds of unionized workers ahead of a massive rally Wednesday which is expected to draw tens of thousands of supporters.

Martin Luther King Jr. is most recognized for being a civil rights icon, but alongside that, he was also a fierce champion for worker rights. He marched with black sanitation workers in Memphis before being gunned down April 4, 1968. In the eyes of labor unions, that fight for worker rights has not yet been won.

Labor unions plan to commemorate that fateful day with a rally Wednesday aimed at advancing social and economic justice. The protest is already drawing crowds with unionized workers from dozens of locals already descending on the city. Protest organizers are expecting to draw tens of thousands of workers and supporters.

The American Federation of State, County and Municipal Employees (AFSCME) is hosting the rally alongside some of the most influential unions in the country. The unions hope to draw on the legacy of King in their fight for worker rights. AFSCME actually represented the sanitation workers during the historic strike five decades ago.

Unite Here is another union helping to organize the upcoming rally. The union is deploying over a dozen of its local affiliates to assist with the event. The union and its affiliates have also helped to promote the event online by posting pictures of its members as they prepare for the rally.

Labor unions and their members have taken to social media as they’ve traveled into the city. Some have posted pictures of union members meeting up or buses full of protesters  – while others have shared speeches from union leaders who are already in the city for a conference being held ahead of the rally.

The Service Employees International Union (SEIU) is also among the unions participating in the rally this week. The union helps fund the Fight for $15 movement which held a similar protest last year aimed at raising wages.  SEIU President Mary Kay Henry told supporters ahead of the rally that economic justice cannot be won until racial justice is achieved.

National and local union leaders from elsewhere have also begun showing up for the conference and rally. They have been discussing worker and civil rights alongside other influential activists. Teamsters President James Hoffa met with unionized workers who were in town for the rally.

The rally will focus on a number of issues like worker rights, civil rights, criminal justice reform, and immigration. A lawsuit that could end all mandatory dues in the public-sector is also likely to be a point of concern for protesters as well. The U.S. Supreme Court is expected to rule on the case sometime around June.

AFSCME in that case was sued by state workers who argue mandatory union payments violate their constitutional rights. Those opposed argue it will undermine unions and their ability to fight for workers while supporters see it as giving workers the right to choose.

The rally will also serve as a launching pad for a larger project being called I AM 2018. The project is aimed at taking the lessons learned from civil rights era worker protests and applying it to the current struggle for racial and economic justice.