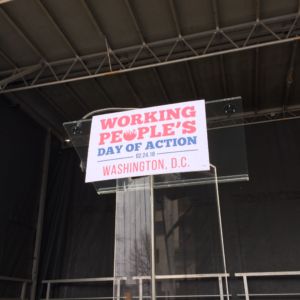 Labor unions and their supporters gathered in cities across the country Saturday to protest a range of issues including a case against mandatory union payments.

The Working People’s Day of Action was held in cities across the country with the aim of defending worker freedom fighting and what protesters see as a rigged economy. The U.S. Supreme Court was a primary focus for protesters with an upcoming case that could potentially outlaw compulsory union dues in the public-sector.

Labor unions and their supporters argue that mandatory union payments help ensure they can properly fight for workers. They also warn that the case is a corporate ploy to undermine those protections. Critics counter that workers should have a choice on whether they want to pay union dues. The oral arguments for the case are being heard Monday.

“Wealthy special interests, backed by the Trump Administration, want the Supreme Court to rig the economy even more in their favor with a case called Janus v. AFSCME Council 31,” protest organizers said on their website. “The forces behind this case simply do not believe that working people should have the same freedoms and opportunities as they do.”

The protest organizers add that it’s about standing up for the freedom of working people to come together so that they can fight collectively for equitable pay, affordable health care, quality schools, vibrant communities, and an overall better future. Protesters gathered in places like New York City, Philadelphia, and Washington D.C. 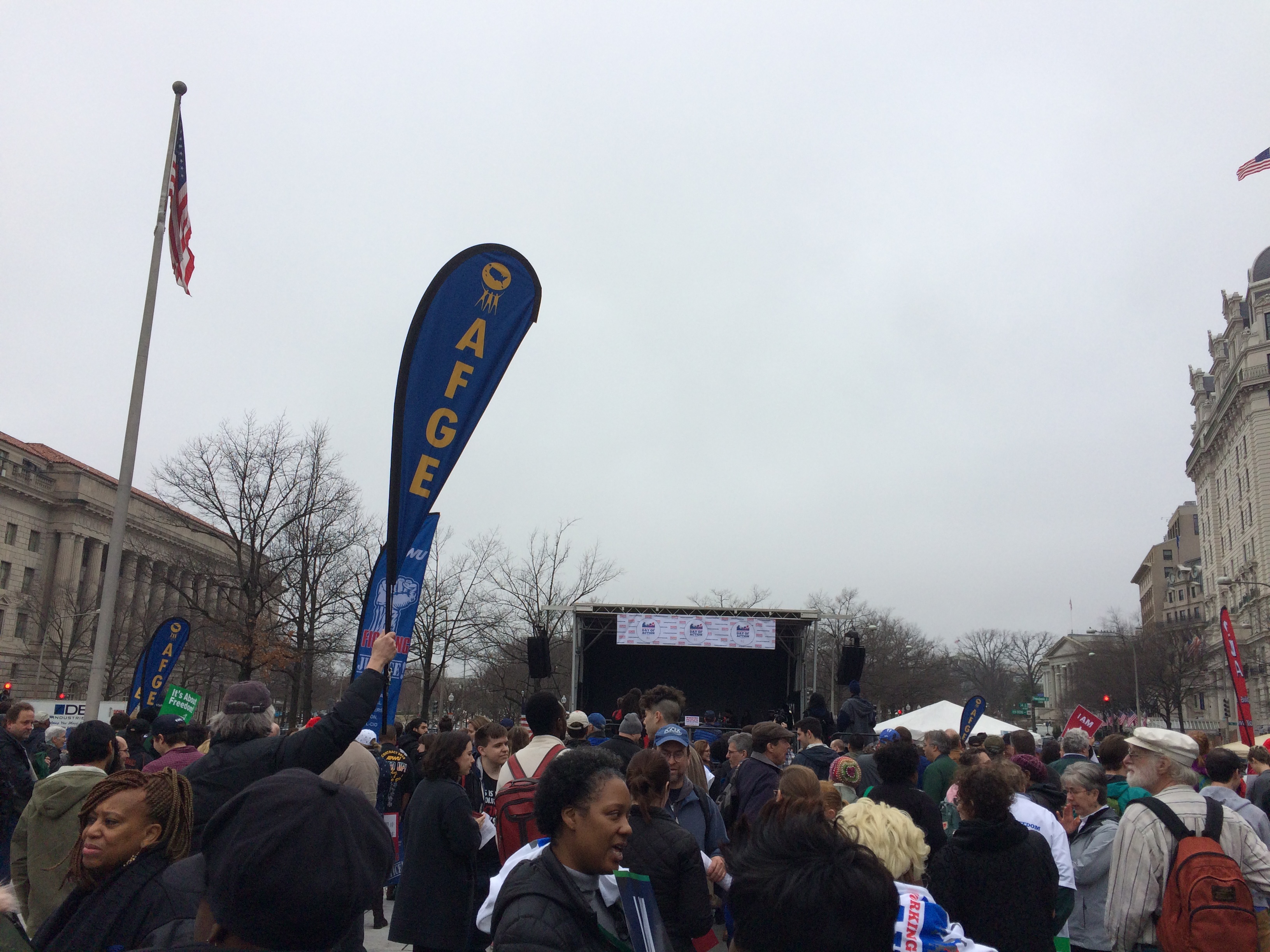 Illinois state worker Mark Janus mounted his legal challenge against mandatory union payments after he was forced to fund a local chapter of the American Federation of State, County and Municipal Employees (AFSCME). National Right to Work Legal Defense Foundation (NRTW) and the Liberty Justice Center (LJC) have been assisting him in his challenge.

“This is about the resources that workers have collectively to be able to get a fair play in the field,” Erin Yeagley, a member with the Maryland State Education Association, told InsideSources from the Washington D.C. protest. “We fought very hard over many decades so that workers can come together and fight. If the Supreme Court undermines that by allowing people to free-ride where unions have to invest resources without getting participation back from everyone, things are going to break apart.”

Yeagley adds that a ruling against unions has the potential to hurt all workers since it will become harder to fight for workplace rights. The free-rider view gets to the heart of the union argument – and has been used in opposition to similar cases and right-to-work laws. 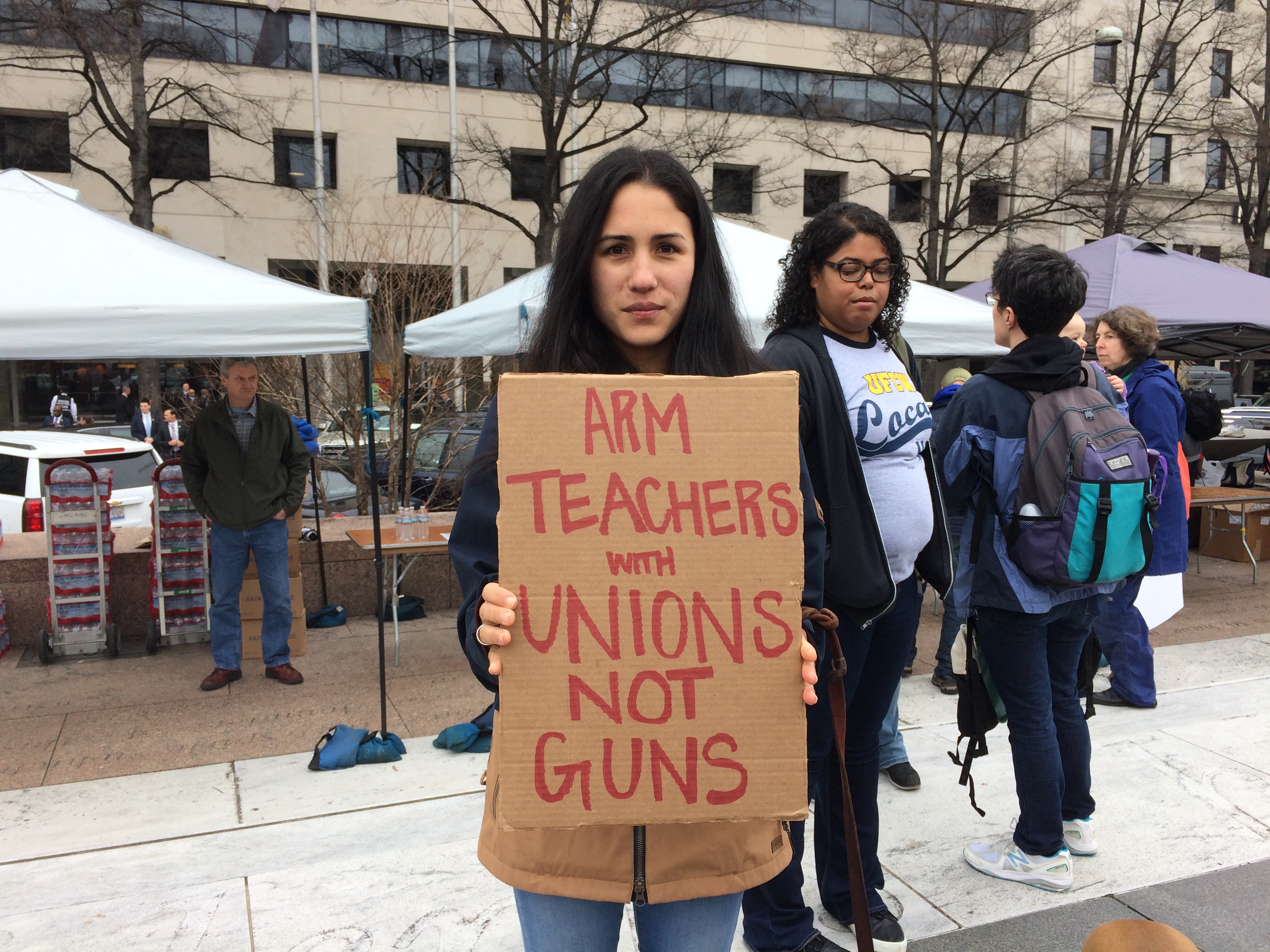 “Right not there are fee payers,” AFSCME Local 3829 President Qaddafi Sabree told InsideSources from the protest. “They’re not in the union, but they pay a fee to the union to not be in the union. Once Janus v. AFSCME goes through, and if Janus wins, they no longer have to pay that fee. But the union still has to represent them.”

Labor unions currently can require dues in many states so long as nonmembers have the option of paying a nonpolitical fair-share fee. Labor unions that get voted in as an exclusive representative for a workplace have to represent every worker regardless of whether they pay so some might choose not to fund the union knowing they’ll get the benefits anyway. 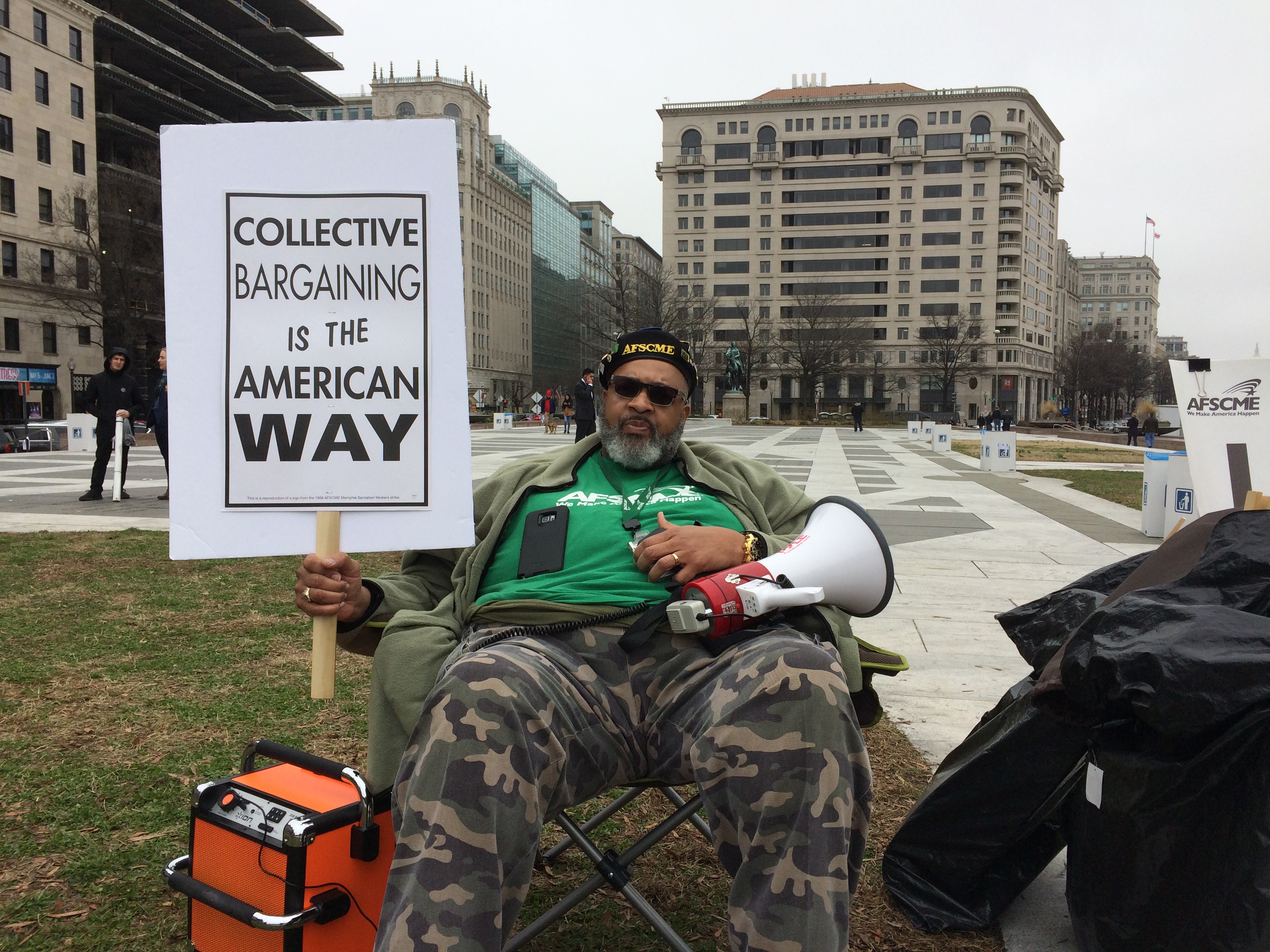 “If you don’t want to be in the union I understand,” AFSCME Local 2743 President Felicia Dantzler told InsideSources. “And I think with Janus he should still have raises and good working conditions comparable to dues-paying members. But when it comes to anything out of that, when you need representation, and you still want me to represent you, and you haven’t paid a dime, no, you should not continue to sit by the dues-paying members and get the same rights.”

Those opposed to compulsory union dues have countered that there are workers who oppose the benefits their union is fighting for. Some teachers, for example, might not want seniority policies because it rewards people for how long they have worked instead of what they contribute. It’s also, for them, about the principle of not having to fund an organization that was forced upon them.

“Seeing union bosses pretend to be for freedom in the Janus case is downright offensive to the millions of workers around the country currently forced to pay a union official every paycheck just to keep their job,” NRTW public information vice president Patrick Semmens told InsideSources. “It’s important to remember that a ruling for Mark Janus would not stop a single worker from joining a union or paying union dues. The only change would be that union membership and payments would be voluntary, and workers who don’t support the union would have freedom to choose for themselves.” 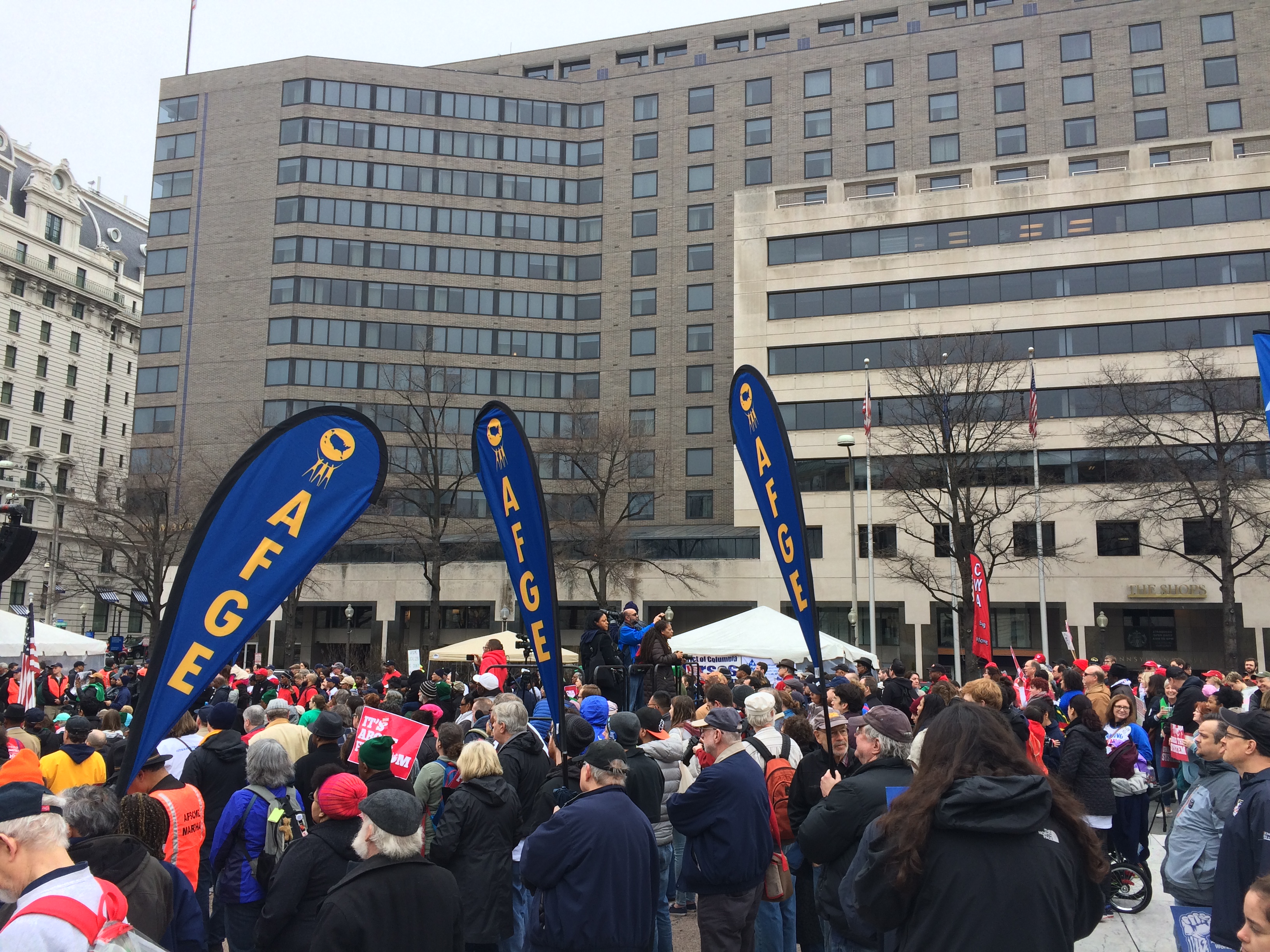 AFSCME Local 709 President Debra Walker argues that those workers who don’t agree with what the union is fighting for should have gone to meetings so they could let their grievances be known. That way, she argues, their fellow members and union leadership can work together to address problems for the betterment of all workers.

“If you don’t want to pay dues but still want representation you need to leave,” Walker told InsideSources from the Washington D.C. protest. “This is not about one person. All these people out here. We’re struggling. We don’t need anyone to take away what we’re building. This is my first time in a union and to strip all of that from people. People hurt every day, we’re struggling out here. It’s not fair.” 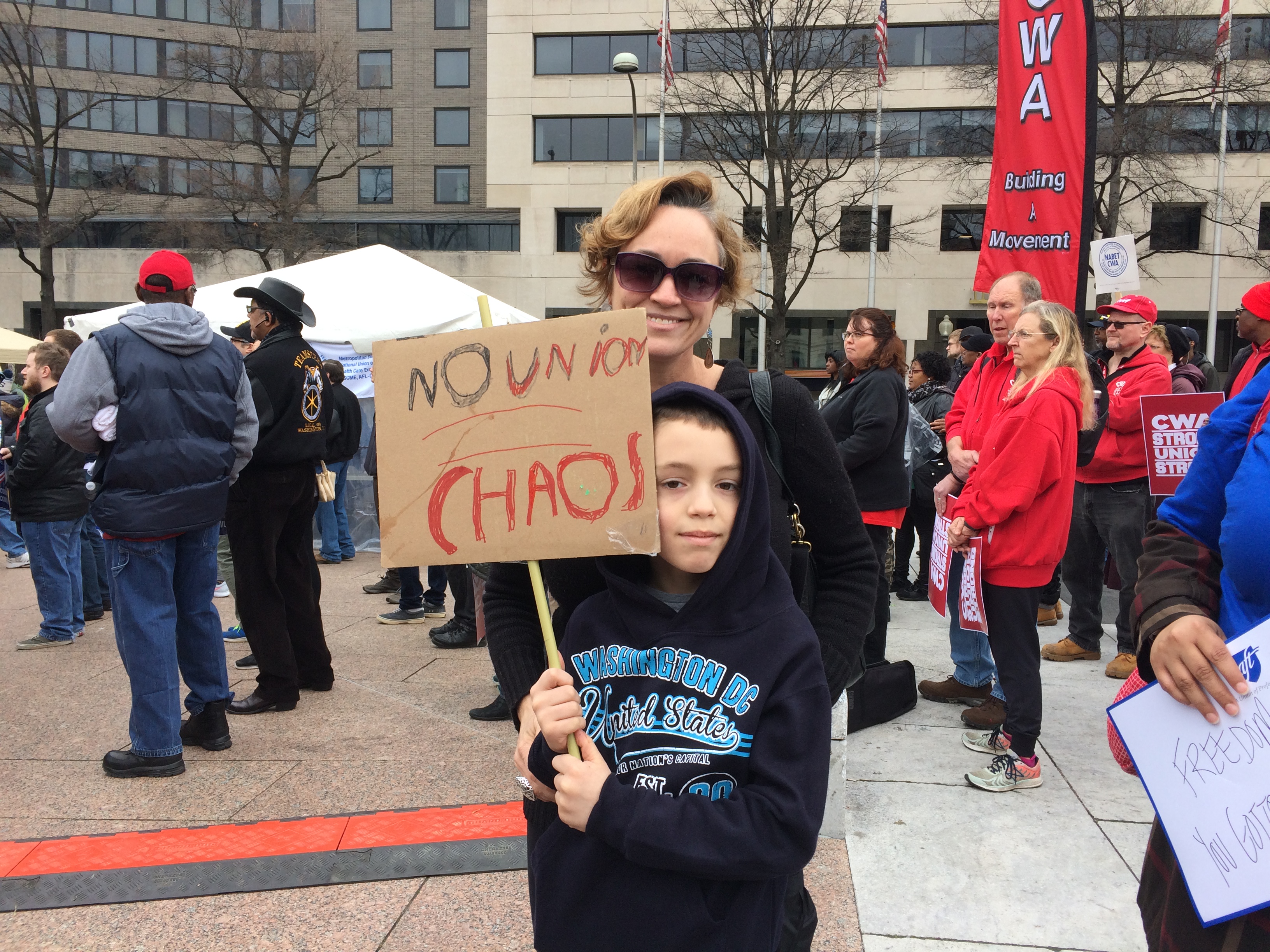 Walker and the other protesters fear that a ruling against unions could be devastating for workers across the country. Unions could potentially become so weakened that many workers will be unable to advocate for rights at work – and some established rights might be diminished overtime.

“It’s taking away, busting up the union,” Walker said. “They’re being disrespectful to all the working people out there. We will no longer have the bargaining chip to save us. It’s about workers’ rights. You cannot take that away from us. So Janus needs to sit down, he needs to stop it. If you don’t want to pay, come out of the union.”

Labor unions have a lot to lose if the court rules against compulsory payments in the public-sector. The Bureau of Labor Statistics (BLS) reported that the union membership rate stands at 34.4 percent for public-sector workers, but only 6.5 percent for private. 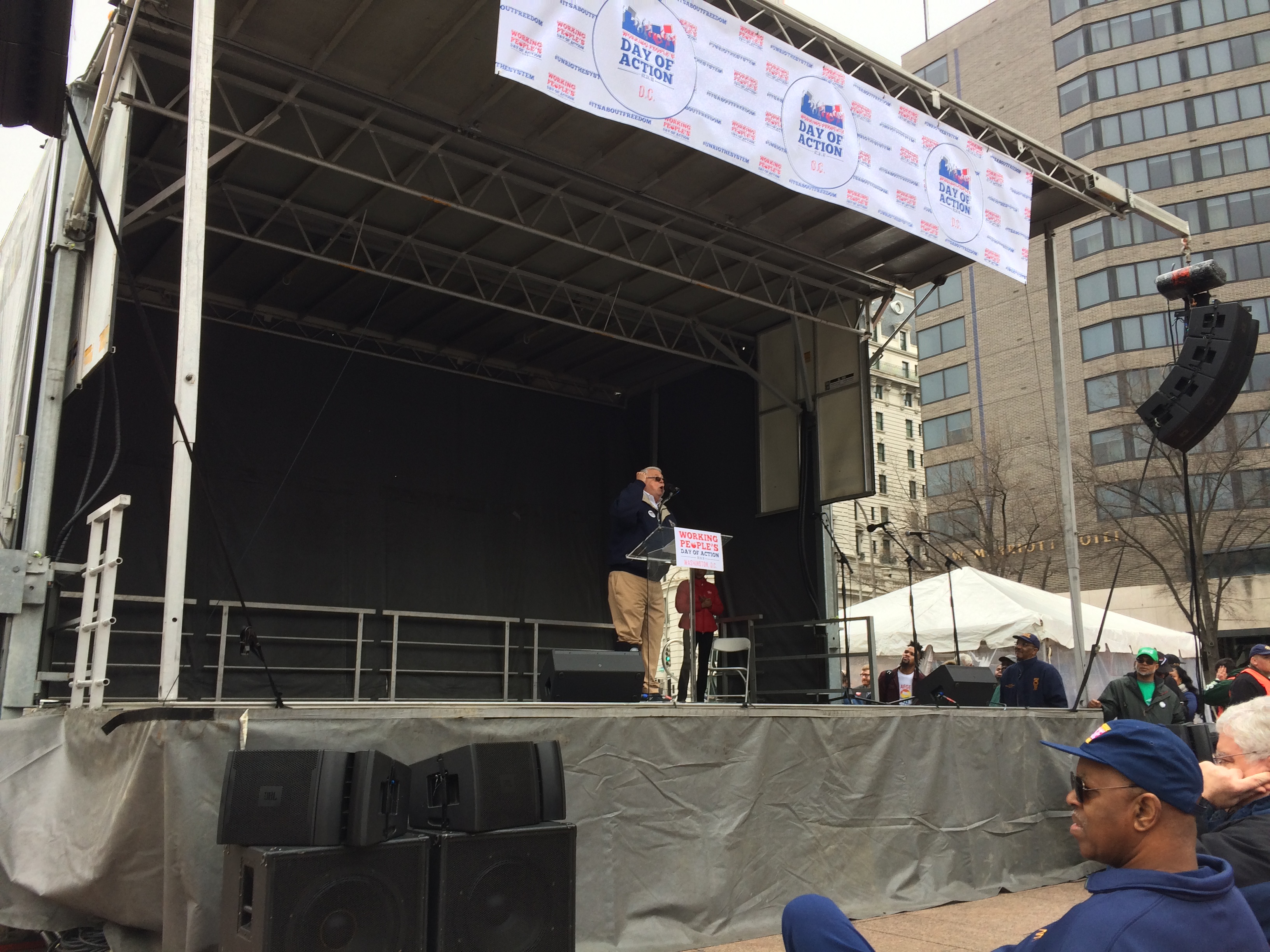 “It could be potentially devastating,” Yeagley said. “Not just for unions workers, but for workers generally across the country. It is an opportunity to organize and reinvigorate the labor movement. But it’s not the opportunity we would have wanted to see. It’s going to be a big blow to unions, but if there’s any silver lining, it’s that it has wakened people up.”

Sabree notes that unions have successfully fought for many worker rights in both workplaces and the national level. Unions achieved the 40-hour workweek, minimum wage increases, safe workplaces, and a range of other benefits and protections. He adds that without them workers will be harmed.

“I think it is going to be bad, but it isn’t going to be overnight,” Sabree said. “I think in five to 10 years we’ll really see a difference in union membership. However, I think it will be really bad so unions will make a comeback. But it might be a generation from now.” 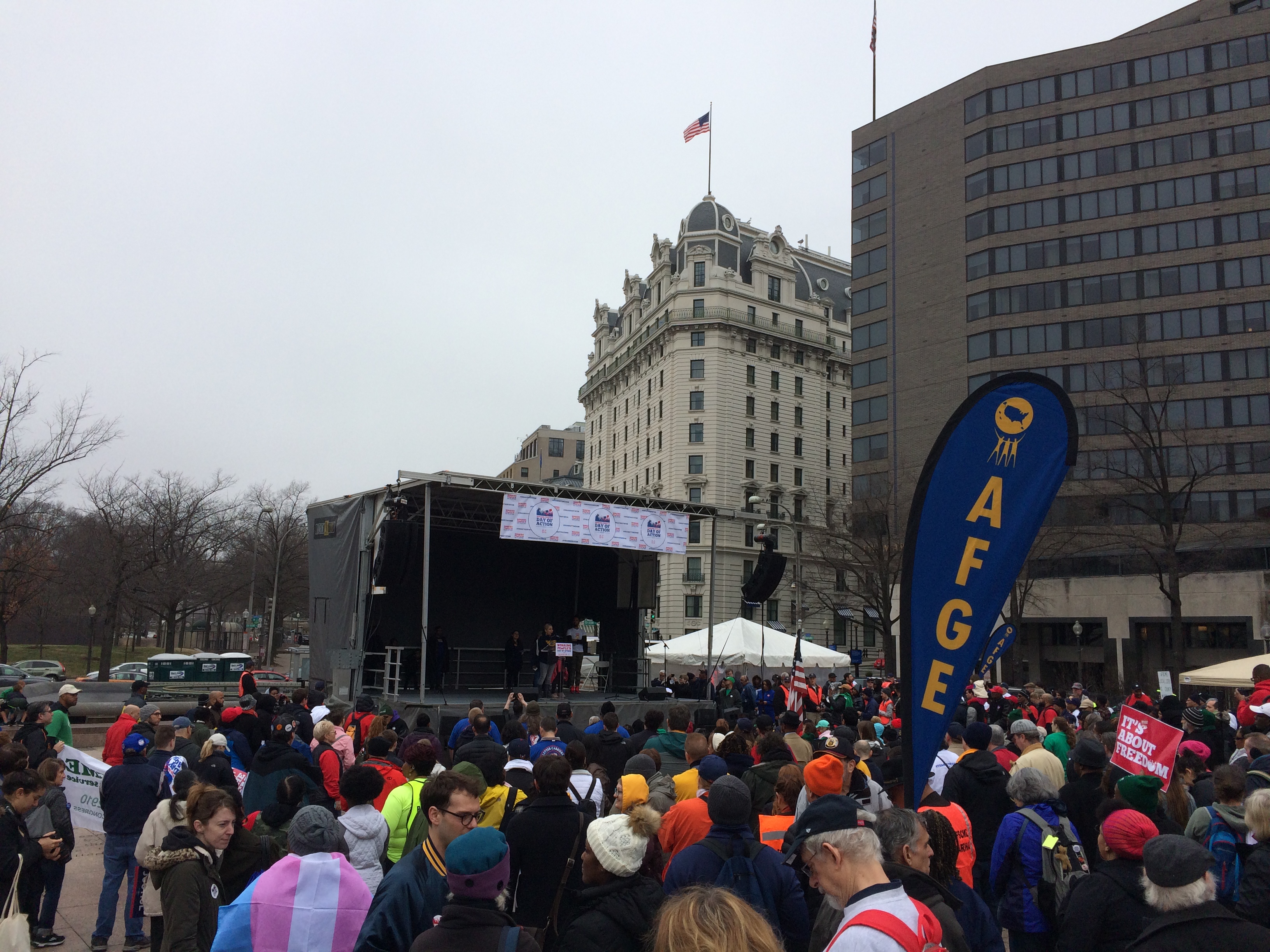 The U.S. Supreme Court upheld the fair-share fee during the 1977 case Abood v. Detroit Board of Education. The justices found that unions could require a nonpolitical fair-share fee from nonmembers. Janus and his lawyers argue in their case that public-sector collective bargaining and political lobbying are indistinguishable.