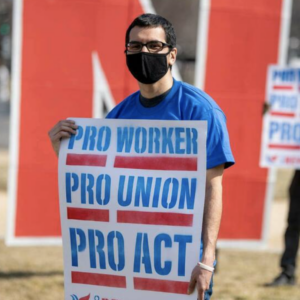 America’s labor unions are in trouble. A declining membership base, an antiquated business model and often hostile legal environments have created significant problems for American workers and our nation. Unfortunately, the labor movement and the Democratic Party’s main effort to improve things for organized labor––a bill called the Protecting the Right to Organize (PRO) Act, which has passed the House and is being debated in the Senate––would reinforce many of the things that caused America’s labor movement ills in the first place.

The decline of unions, which dates back more than 60 years, has correlated with trends that ought to concern people of all political stripes: growing income inequality, loss of social solidarity, stagnant wages, and significant growth in the size and scope of government. Trying to reverse these trends is a good idea and more organized labor would likely help. But the PRO Act’s efforts to boost unions would simply make things worse.

For starters, the PRO Act essentially nullifies the right-to-work laws in 27 states which allow workers to opt-out of paying union dues even if they benefit from a union contract. Proponents of the PRO Act are right that it’s unfair to force unions to provide workers with the benefits of a union contract without collecting a dime from them. But the absence of such laws, which can force workers to pay money on account of an organization they might actively oppose, is even more unfair. So, the PRO Act substitutes one bad policy for another without trying to change the system.

Other provisions may raise even deeper concerns. For example, bans on employers advocating against unionization are almost certainly violations of first amendment free speech rights. Similarly, mandates that employers hand over all sorts of private information about their workers could jeopardize privacy and provide opportunities for harassment. Even when the act’s authors head in a promising direction, the law is flawed. A provision intended to help “gig” workers form labor organizations (a decent idea) draws on a deeply flawed California law rather than thinking creatively about establishing a “third status” for such workers––somewhere between employee and contractor. Despite the good provisions in the bill, these substantial flaws make it a bad piece of public policy.

To remain competitive on a global scale, the United States needs to experiment with our current labor laws rather than doubling down on something that doesn’t work. The largest flaw in the current model—the fundamentals of which date back to 1935––is that it’s intrinsically adversarial. Restrictions on cooperation between unions and employers mean that almost all negotiations turn into a zero-sum game where unions and managers fight over a fixed pool of resources rather than working together to create value. What business person wants an outside party second-guessing every decision they make? Just as bad is the “all-or-nothing” deal that most unions must offer under current law: employers can’t legally involve workers in many aspects of management absent a union contract and union officials can face felony charges if they try to collaborate with employers to advance mutually beneficial policies. Workers likewise must cede negotiation rights over nearly all aspects of their jobs to a union or go more-or-less without representation.

More unionization could be good for America, but the current structure the law imposes on unions doesn’t serve anyone’s interests. And the PRO Act, for all of its worthy intentions, is simply a bad idea.

Eli Lehrer is president of the R Street Institute. He wrote this for InsideSources.com.