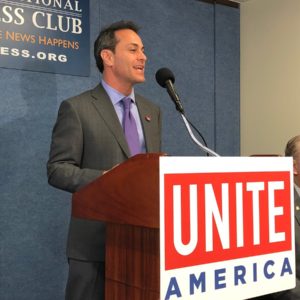 Party affiliation is a strange metric. Even in the midst of one of the most contentious elections of recent history, more Americans identified themselves as “Independents” than Democrats or Republicans. Gallup polling today shows that more than twice as many Americans describe themselves as independents (44 percent) than Republicans (22 percent). At the ballot box, however, independent candidates rarely make a strong showing. In fact, most of the American electoral system, from the regulations governing campaign finance and organization, to the number of podiums on a debate stage, presume a two-party system. On Tuesday in Washington, D.C., Unite America took a step towards trying to change this duopoly, announcing its first ever slate of five candidates for governor and U.S. Senate.

“These candidates are the vanguard of a new movement in our politics to bridge the growing partisan divide and to ensure government truly represents the people – not the party bosses or special interests,” said Nick Troiano, Executive Director of Unite America.

“Unite America is, for the first time, building the volunteer network, donor community, and electoral infrastructure necessary to level the playing field with both parties,” he continued.

Formerly the Centrist Project, Unite America was founded in 2013 out of a desire to find issues that would unite the country, rather than divide it on partisan grounds, and promotes competition, transparency, and accountability in politics.

“We’re not demanding allegiance to a new party or ideology; instead, we’re uniting around a new “Declaration of Independents” that articulates common sense principles of stewardship, opportunity, and equality under the law and a common ground approach of putting country before party, following the facts, and working together to solve problems,” the group states.

Each one of the five candidates Unite America is supporting has signed on to the declaration. These candidates include incumbent Alaska Governor Bill Walker, Terry Hayes, a candidate for governor of Maine, Greg Ormen, who is running for governor of Kansas, and Craig O’Dear and Neal Simon, who are both running for the Senate in Missouri and Maryland, respectively.

Unite America believes that a small number of independent senators could have a significant impact on the way the country is governed.

“One point of agreement is that DC is not working,” said Simon, who is running for a Maryland senate seat. “A small number of moderate independents could change this by pulling the parties away from the extremes.”

He describe a situation where a legislature was divided evenly between 49 Republicans, 49 Democrats, and two Independents.

“To earn our votes, they would have to listen to us,” he stressed.

Unite America calls this the “Fulcrum Strategy.” This strategy functions on the idea that, in a divided legislature, a small number of independents working as a coalition could control the balance of power and use their leverage to push for compromise. Whether this means that such a legislative body would be in essence held hostage to the policy preferences of a bare handful of lawmakers is not explained.

Simon and his fellow candidates emphasize that they seek to find real solutions to government problems by focusing on fiscal responsibility, competition, transparency, and by working together with members of both parties. On a state level, this has been successful, says Walker, who won the Alaska governor’s mansion after his former Democratic opponent dropped out of the race to join his ticket as lieutenant governor. Walker’s cabinet has continued this bipartisan approach.

On a national level, what these solutions would look like is not sketched out. The trouble with an explicitly centrist party is that the center shifts depending on where you stand. While the policy problems–the national debt, taxes, healthcare access, economic mobility–that Unite America highlights are real, the solutions it proposes are the subject of bitter debate. It remains unclear whether using “common sense” to find “common ground” to solve problems is enough to serve as a policy platform.

Unite America is striving to walk a fine line between gaining the advantages of a party in terms of political structures that aid in fundraising and media coverage, while at the same time eschewing many of the negative associations party politics have gained. This has made it difficult for the group to recruit campaign staff and to find candidates. It is presently working to recruit and support independent state legislative candidates in Colorado, Maine, Washington, Oregon, New Mexico, and Alaska.