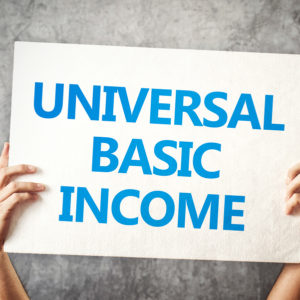 The global outbreak of COVID-19 raises a question that’s been discussed, off and on, for more than a century.

What about guaranteeing everyone a certain amount of money on which to cover necessities such as food and lodging? Since all citizens would be entitled to a fixed amount, the term for this dispensation of funds is “universal basic income,” or UBI.

I got to thinking about it after President Trump sent me a check in accordance with his promise to hand out $1,200 for every God-fearing U.S. taxpayer whose income fell below a certain rather high level. I had no trouble qualifying. The words, “Economic Impact Payment, President Donald J. Trump,” were printed in capital letters in the lower left-hand corner. Thank you, President Trump!

Really, Mr. President, I did appreciate the handout. Every penny counts. As you might imagine, however, that kind of money disappears fast. When’s the next check coming? Is it in the mail? Or on your desk awaiting your signature?

Are we talking about some form of UBI, enough for every one of us to get by as jobs disappear, companies slash staffs or fail to reopen, and the struggle to survive turns into a race for survival of the fittest?

In fact, UBI is extremely controversial. Some folks see it as next to communism or socialism. Every adult should be making a living without having to beg from the state.

Exemptions, according to this logic, are for those taking care of kids while their spouses are at work or are disabled or ill. Then there are those with enough income from inheritances and trust funds plus retirees who count on Social Security checks for which they are eligible when they get into their 60s.

Those checks that Trump sent out to U.S. citizens two months ago are not unique. South Korean families also got an infusion of funds, albeit not so generous. A family of four, for instance, was entitled to 1 million won, about $812.

Sorry, if two people in the family were working, the handout remained the same. And if the family amounted to only three people, then it was less. Still, those who got the money were glad to have it.

The arguments for and against UBI go on endlessly.

In favor, it’s easy to figure that those who get it will be more inclined to take time off to study, gaining qualifications for a new job, and perhaps they’ll buy more stuff, driving up consumer spending.

Negatively, however, they may lack a certain incentive. They may see a regular UBI check as a good reason not to bother to work full-time, and they may prefer to exist as burdens on the system.

In fact, the sums given out so far are much too small to cover expenses for most people. They are one-shot disbursements, quick to disappear while the daily challenge of making a living worsens by the day. We need regular checks for all to count as universal basic income.

Otherwise, there’s no way the system really smacks of socialism or communism.

There are, moreover, two other points to bear in mind. The first is, where would the money come from? One easy answer is that taxes would have to go up considerably. The rich, the 1 percent of the U.S. population that controls 40 percent of America’s economy, have gotten still richer off of tax cuts.

A universal basic income for all, including those who have been unemployed and rarely worked, who subsist already on some form of welfare, would require higher taxes.

But what about the argument that we’re talking about communism or socialism here? Forget it. Communist and socialist systems are among the most oppressive, the most status-minded, the least generous toward their own people.

Look at North Korea, probably the most extreme case. Or look at China, where billionaires and multi-millionaires proliferate under the benevolent hand of the malevolent President Xi Jinping, whose concern for his people goes as far as his ability to control them.

He is not preoccupied by worries about making sure the poor get a monthly handout.

We are going to be hearing much more about universal basic income in coming months or years. President Trump and other world leaders will face mounting pressure to bail out people who have lost jobs, who may never recover them.

The current turmoil in American cities reflects more than unrest attributable to the racism of police officers responsible for killing people of African descent.

The unrest after the death of George Floyd, killed when a brutal cop kneed the back of his neck for eight minutes in Minneapolis, springs from underlying anger over the inequities, the lack of opportunities, the loss of income across the country.

It will take a lot more than a handout check to buy back public confidence or calm nerves to right wrongs. Universal basic income may be a fine idea in theory but will not begin to resolve underlying problems.

Which is not to say I would not say, thanks President Trump, if he cares to send me another check.