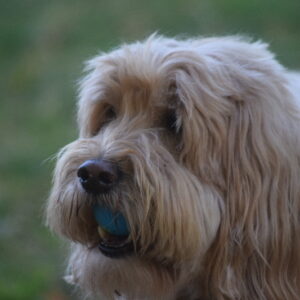 University of Nemo: Lessons of Life and Love

Fourteen years ago I succumbed to family pressure and added a dog to our family. I wasn’t sure why because as I repeatedly said, “I can’t even consistently get dinner on the table.” But they wore me down, and so I reluctantly said “ok” and counted on my husband to carry the load.

Last week we said goodbye to Nemo. Adding Nemo to our family will remain one of my best life decisions—on par with picking my mate. It is impossible to do justice to what 14 years of a furry love bundle can bring to one’s life, but it’s worth a try.

I’ll start with the loudest memory. Nemo had a knack for greeting people by putting a stuffed toy in his mouth and howling so fully that I suspect the whole street could hear. If you weren’t familiar with his habit, you might be scared, but then he’d wag his tail, lie down and invite you to rub his belly—actually more a demand than an invitation.

I thought happy howling was what all dogs did, but when we later got Teddy, we quickly realized that Nemo’s habit was dog-specific. Teddy could fetch with the best of them, but nary a howl could he utter. With Nemo now in doggie heaven, Teddy sometimes puts a toy in his mouth to say hi, but no sound emits. It’s as if he’s saying, “I can kind of do it. How’s this?”

Fourteen years yields many memories but a favorite of mine is when George, a 4-year-old we knew from the playgrounds, greeted Nemo with an invitation to his birthday party. It was as if Nemo was just another friend who belonged. Our days always started with a visit to the park where families congregated, waiting for the school bell to ring. In those few minutes, Nemo would gently run after a ball that some accompanying toddler might throw 3 feet. Nemo would return the ball, drop it, and wait for the next toss. Those small moments—and there were many—created emotional connections and led to so much “Nemo love.”

Sometimes, Nemo would go to my husband’s office for the day. He quickly ingratiated himself with people in the building, and soon most offices had treats, just in case a furry creature paid them a visit. Nemo was referred to by the tenants as “The mayor of the building” and he earned it.

Nemo was also master of the unspoken word—what we as people work so hard to learn. He would intuitively find the person in the room who was struggling and park himself at their feet. Once it was a woman fighting depression. Another time, it was someone fighting late-stage cancer. When my sister-in-law had a biking mishap that left her very bruised, Nemo was predictably at her side. She wanted to release him from duty. “How do we let him know that I don’t need him?” she asked.

Nemo was eleven when we introduced puppy Teddy into our family. We thought Nemo would benefit from Teddy’s energy, and we would be comforted by Teddy’s presence when Nemo exited the stage. Expectedly, Nemo initially showed territorial behavior, but within months, Teddy’s playfulness added pep in Nemo’s life—just what we had hoped.

Nemo taught us the art of staying relevant. When Nemo was 11, I decided to take him to Teddy’s trainer to see if he could pass the for Canine Good Citizen (CGC) test to be a therapy dog. Felicity, the CGC tester, never asked why but was awed that this old guy who she had never met could pass all 10 steps, lickety split. I was so proud that I immediately phoned my septuagenarian sister who I felt needed a reminder that age does not mark our relevance.

But of course, Nemo proved his relevance time and time again. Whether it was gently waking up my aging mom when she would come to visit with by licking her face, or keeping me company when I grieved the loss of my mom, Nemo made a case for himself daily.

Nemo wasn’t perfect. No one is. He once broke into a challah that I had mistakenly left on a chair, eating almost the whole thing. His stomach started to shout at him just minutes before I did. Nemo was tough on Teddy until he accepted and then depended on Teddy’s companionship. And he could have warned us that he was throwing in the towel. Maybe he did, and I didn’t read the signals. The last two nights, Nemo rolled himself right near Teddy as he fell asleep.

I often say, “Write your piece.  Find your peace.” While Nemo has found peace, I am hoping that through my words, I will find mine. Teddy will help too because he is, after all, next-generation Nemo.