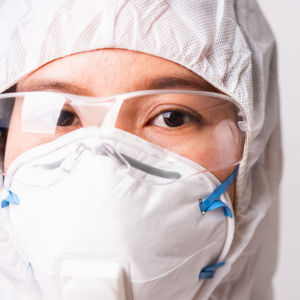 The COVID-19 crisis isn’t just a threat to the world’s health, it’s also brought out some of the worst actors hoping to exploit the desperate need for medical equipment — and even fund terrorism as they do.

“The evolution of this continuous fraud never ceases to amaze us and it’s really just unprecedented,” said Steve Francis, assistant director for the Global Trade Investigations Division with Homeland Security Investigations (HSI), during a roundtable on the issue of PPE fraud hosted by InsideSources.

The event was held just days after a high-profile crackdown on the fraudulent sale of personal protective equipment stopped a plot by ISIS to use PPE fraud to fund their terror activities.

“What we realized early — in March and April — is that this is much bigger than intellectual property or fraudulent schemes,” Francis said. “We saw a surge of unapproved medical devices and home-health test kits that were fraudulent, counterfeit and brought into the United States and people were not sure whether they were legitimate or not.

“And we saw a surge in these ‘antiviral cures.’ You know, people claiming their products can… cure or prevent COVID-19,” he said. “And then we saw a significant surge in counterfeit pharmaceuticals, hydroxychloroquine, and other products that were being discussed in the media — surges of those that were obviously very extremely harmful to the American public.”

Francis said in the past five years, pre-COVID, up to 90 percent of HSI seizures were from China and Hong Kong. But that all changed when the coronavirus nearly shattered global supply chains.

“So now we’re seeing seizures from the UK, Nigeria, Japan, Thailand, Germany — I mean, you name it every country,” he said. “And these bad actors in these organizations are pivoting toward this criminal activity because of the high demand… and how profitable it is.”

Not only is China no longer the nexus of the problem, Francis said, the Chinese government is helping fight it.

“We have worked very closely with law enforcement partners around the globe and China law enforcement and public security have been very cooperative and helpful,” Francis said. “We’ve actually recovered funds that were given back to U.S. companies.”

OSP combines the assets of the U.S. Immigration and Customs Enforcement (ICE) with HSI’s expertise in global trade; financial and cybercrime investigations; importation of prohibited pharmaceuticals and medical supplies; websites defrauding consumers; and other criminal activity that compromises legitimate trade or financial systems or endangers the public.

The private sector is also stepping up.

Philip Morris International Inc. (PMI), the U.S. Chamber of Commerce and Procter & Gamble are among a group of companies behind an advertising campaign designed to raise awareness of the market for fraudulent PPE and spotlight the Department of Homeland Security’s resources.

“There are lots of new emerging fraud schemes, and oftentimes those fraud schemes are directed against those in the population that are most at risk,” Helmig said. “They may not have the savviness to recognize a fraud scheme, or they may be so desperate that they don’t care.”

Helmig noted that last week, DHS and other law enforcement agencies announced a series of civil and criminal complaints against ISIS, alleging it set up an online PPE scam targeting U.S. hospitals, nursing homes and first responders in order to raise funds.

“You have to hand it to ISIS from an ingenuity perspective,” he said. “ISIS saw that there was a change in the narcotics supply trade across Europe because of the shutdown until they stepped in and shipped 14 tons of tablets to Italy,” adding that it represented $1 billion in narcotics.

Hernan Albamonte is head of Illicit Trade Prevention for PMI, but the illicit trade of PPE has hit home.

“In March, when the pandemic was just starting to rise here in the U.S., my wife was kind of desperate to get those N95 masks and she spent hours on Amazon and on eBay and other marketplaces trying to find them. Of course, all sellers were out of stock,” Albamonte said.

“Then she turned to AliExpress in China and she found them,” he said. “With my background, I was quite skeptical and I warned her about the high chance that she would be scammed or receive counterfeit goods.”

Sure enough, when the package arrived, it was not the high-quality masks. “A sheet of paper would have done a better job” protecting from COVID-19, Albamonte said.

“What I’m trying to say is, even with a decade of experience — it can happen to any of us.’