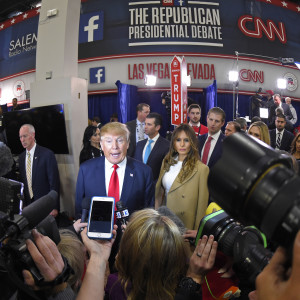 Unpresidential Profanity: The Reason Trump Doesn’t Give a Damn

Critics and even some allies in recent days have criticized Donald Trump’s increasing use of profanity on the stump, but language experts contend the constant cursing isn’t hurting the billionaire with much of the American public — instead, it’s more likely a key part of his appeal.

Michael Adams, an English professor at Indiana University and author of “Slang: The People’s Poetry,” told InsideSources Trump’s unfiltered speech is reflective of the way Americans talk today, not 20 or 30 years ago.

“I don’t know whether it’s deliberate or natural for him, but it is a sort of linguistic populism … a way to speak to a population that feels connected to the candidate because the candidate uses his or her language, the language of the people.”

In just one speech on Thursday in New Hampshire, the Republican presidential front runner told cheering supporters that he would “bomb the shit” out of the Islamic State, that “Afghanistan is going to hell,” and that, on trade with China and Mexico, he would “kick their asses.”

As the billionaire developer finished with a silent F-bomb (another profanity he’s shown no qualms about using in the past), the crowd chanted “Trump! Trump! Trump!”

The profane language on the stump has drawn fire from more traditional GOP candidates in the field, including Jeb Bush, the son on one president and brother of another.

“I don’t think a president would have ever shouted profanities in a speech in front of thousands of people with kids in the crowd,” Bush said. “He does it all the time.”

Ohio Gov. John Kasich chided Trump: “You shouldn’t use that kind of language. My wife told me one time, when I became governor, she said you’re the father of Ohio, act like it.”

Even Fox News’ Bill O’Reilly, who calls Trump a friend, said the blue language is inappropriate: “Advice to Trump: Using profanity on campaign trail is not presidential. Most use it, including me, but we are not running for [president],” O’Reilly tweeted Friday.

But linguists who study the way Americans curse say that in a culture more saturated than ever with blunt language — from Martin Scorcese films to HBO series to pop music lyrics and uncensored tweets — Trump isn’t breaking new ground. He’s simply reflecting a new norm.

Jesse Sheidlower, author of “The F Word,” said cultural definitions of what is or is not taboo shift — sometimes dramatically — over time.

“The traditional offensive vocabulary of sexual and scatological language is much more common now, in both a pop cultural context and in a general context,” the former president of the American Dialect Society told InsideSources.

“The kinds of things that we take offense at, those have also changed. Sexual and scatological terms are really not a big deal now. Certain religious terms … like ‘God damn’ or ‘hell,’ which 200 years ago would have been extremely offensive, now bother fewer people. At the same time, the use of any sort of racial or ethnic term would be considered much, much worse than it ever was.”

Indiana University’s Adams, whose latest book, “In Praise of Profanity,” is to be published later this year, said the acknowledgement of profanity in American culture is healthy.

“That honesty about the relationship between language and culture is probably good.”

“There’s always been plenty of profanity in politics, we’ve known that. We know that Harry S. Truman was a salty talker. That lowered him in some people’s estimation, but what happens now is that we can hear more of that profanity than we used to.”

Adams cites Dick Cheney telling Patrick Leahy after a 2004 argument in the Capitol to “Fuck yourself,” and Vice President Joe Biden’s off-the-cuff aside, “This is a big fucking deal,” when President Barack Obama signed the Affordable Care Act, as examples of politicians using profanity behind the scenes to communicate in straight-forward, unambiguous language.

Like Cheney and Biden, Trump is using the language of average Americans, Adams said. What’s different is Trump is doing so publicly.

“I think frankly that in some ways that’s good because what we’re doing is ‘de-vulgarizing’ the language, he said. “While it’s natural to think of language levels in relation to class, I’m a little uncomfortable with pejorative senses of vulgar and the connections that people draw, say, between low socioeconomic status and profanity or race and profanity.

“I think it’d be great if we just got class out of the linguistic picture. In part, that’s what’s been happening. People have no longer been using profanity as a means of marking social low from social high. There’s a type of democratizing that goes on.”

“Inevitably, HBO had to be the network of television profanity because people weren’t going to allow televisual representations of life any longer without profanity in it. Because profanity is part of life.”

Adams said it’s a mistake to dismiss political profanity as nothing more than angry rhetoric.

“Another part of the message for Trump is that, ‘I can talk to you this way, we have a relationship in which I can drop all the barriers and talk to you this way.’ I know this sounds really counter-intuitive, but we use profanity to create bonds and sometimes even intimacy. So a politician can trade on that mixed message.”

The professor, 54, adds that it’s clear there’s a gender bias when it comes to swearing — meaning that what works for Trump might not work, say, for Hillary Clinton, the Democratic presidential front runner. Trumpwas was criticized last year when he said Clinton, in her 2008 bid for the nomination, “got schlonged,” creating a verb from a Yiddish slang word for penis.

“Think about the swearing that goes on in the boardroom and the locker room and how you build solidarity with other people,” Adams said. “I think girls are excluded because they’re not speaking the same language sometimes.”

That double-standard and Trump’s willingness to “call ’em like he sees ’em” creates a potential advantage, Adams said. “I would argue that in many cases, there is no other way to say what you mean than by using profanity.”

Bullfeathers, says Madonna Hanna, a retired Bremerton, Washington, teacher who spent years admonishing her high schoolers to “Dare Not to Swear.” Hanna, 62, stills works as a “civility consultant,” lecturing corporate audiences on the anti-profanity campaign that brought national attention to her classroom a decade ago.

“I know darn well, as well as you do … we’ve had a breakdown. We have a couple of generations of kids who think that it is OK to swear,” Hanna said — and profane language on the campaign trail just makes it more difficult for parents and teachers to teach children basic good manners.

“Donald Trump is a grown man, but he should not be using profanity in a public forum. It’s not correct. What he says in the boardroom, what kind of language he wants to use around his own folks to motivate them, to do what he needs to get done, that’s one thing,” she told InsideSources. “But when you use profanity like that and it’s going out on CNN and everywhere, in that instance he is not being a good role model for young people.”