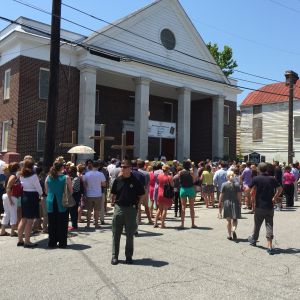 CHARLESTON, SC – After an all-night manhunt across the Southeast, authorities have arrested a suspect, 21-year-old Dylann Storm Roof, in Shelby, NC after he allegedly shot and killed 9 victims after a bible study at Emanuel AME Church in Charleston.

In an emotional press conference, Mullen said the FBI is on the scene and that Charleston Police and State Law Enforcement Division officers are flying up to start investigating and begin evidence recovery.

Mayor Riley, who paused several times during his remarks, praised Mullen by saying “There is not a better led police force in our country.” He also spoke for the nation as a whole that woke up this morning to this tragic event. “In this great country we hold sacred the places where people practice their faith in protection and peace.”

Mayor Riley also told media that he had received a call from Vice President Joe Biden, who personally knew State Senator Clementa Pinckney who was killed in Wednesday’s attack.

Governor Nikki Haley, who arrived in Charleston in the morning, paused and held back tears as she began speaking. “The heart and soul of South Carolina is broken,” she said before heading to a healing service with Riley, Senator Tim Scott, Attorney General Alan Wilson, and countless other local leaders. The Reverend Al Sharpton was also invited and scheduled to be at the service.

According to reports, Roof attended the entire bible study before standing up and starting to fire his gun. Roof, who is from the Columbia area, allegedly got his gun as a birthday present when he turned 21 recently. It’s been reported that his uncle is the one who turned over photos to authorities after seeing the description and surveillance footage on the news. In one of the photos, Roof is seen wearing a jacket with the patches of the South African apartheid flag as well as the Rhodesian flag, which is now the country of Zimbabwe.

The suspect was apprehended quickly in part because of the swift action of all local law enforcement departments, FBI, and other agencies. Using resources like social media to amplify their search was a huge help to their efforts, one State Patrol officer commented.

The healing service was held at Morris Brown AME, several blocks away from the sight of the shooting. The building was packed and the overflow crowd stood in the street outside singing hymns and praying. The outpouring of prayers came from a myriad of faiths, with rabbis offering prayers next to protestant ministers and Catholic priests.

Steven Murphy, who passed by briefly, said he was glad the suspect was caught. “I just can’t believe this guy sat and prayed with these people for an hour and then decided to start shooting, that’s so ridiculous.”

Congressman Mark Sanford in a local radio interview this morning also noted that this was “uncharacteristic for Charleston and South Carolina.”

In Columbia, the state capital, the state Senate draped Pinckney’s desk in a black cloth as colleagues offered words of remembrance. It was a somber moment while the state legislature is in special session finishing the state budget this week.