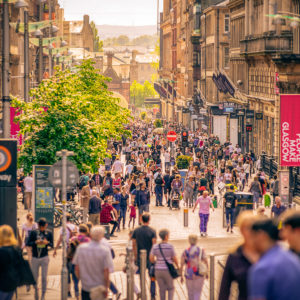 Urban Walkability Is the New Measure of Livability

Walkability is the new hot concept in urban planning.

A new generation of urbanites and people who would like to the move from the cul de sac life in the suburbs to downtowns are seeking neighborhoods where they can walk to shops, theaters, restaurants and to see their friends.

Realtors across America are finding they can get a premium for neighborhoods where residents can walk to just about everything.

Studies show that retailers can expect much more business, sometimes as much as 80 percent more, if they have more, regular foot traffic.

Walking, to its proponents, means living lighter on the earth with less pollution, better health, a sense of close community and an air of enlightenment.

Neighborhoods like Dupont Circle in Washington and Brooklyn Heights in New York are adding walkability to the list of their virtues. But it is a phenomenon being experienced across the country and the world.

London Mayor Sadiq Khan wants to make London the most walkable city in the world, which may be news to those who already think it is a pretty good place for a stroll. But his plans go far beyond tourists marching around the sights or trying to get to Buckingham Palace from their hotel.

Khan seeks an organic change that links walking, cycling and public transport together in a unified way of getting around without cars. He has appointed a commissioner for walking and cycling, Will Norman, to oversee the new London mobility.

American cities are responding to the walkability imperative with initiatives of their own, driven by changing values and concepts.

To me, it seems like a giant back-to-the-future movement where the virtues now claimed for walkability are really the virtues of village life.

So, whether it is in San Diego or Baltimore, a new desire to abandon the car for the street is changing the way we live and what we think is the good life.

It is a part of a large urban adjustment that is underway; although the purists might want to see it as having no technological component beyond the new soles on shoes.

More: Bikes themselves are changing dramatically. The cost of electric-assist bikes has tumbled from many thousands of dollars to around $1,000. Around Seattle, there are bike paths that call for one to be extremely athletic, as I recall.

Walkability, as an urban concept, reflects not only a new sensibility to the environment, but also a desire to regain a sense of the cosmopolitan life. Increasingly, as the malls are failing, we are deprived of the collective living experience.

The growth of the suburbs increased dependence on cars and bifurcated social life into business friends (lunch friends) and neighborhood friends (cookout friends).

Going forward, as the walkability ethic takes hold and more entrepreneurs see its potential, we will see walking communities clustered around transport centers, like subway stops; and, most likely, more short-distance commuting options, such as the light rail operating in Baltimore and San Diego.

Over the decades, I have been watching efforts to have people live where they work with planned communities like Reston, Va., near Washington. I once lived in Reston and that part of the plan never quite worked for it. People still commute to work, sometimes great distances, but with walkability as an urban goal, this trend may finally reverse.

What we do not need, in my view, is too much social engineering, which may be about to engulf London under its socialist mayor.

Bernard Shaw, the playwright, said of H.G. Wells, the author and a fellow socialist, that Wells would cut down the trees to build metal sunshades. That is the danger if walkability gets politicized and mandated. Walkability needs gentle footfalls, not imperatives.