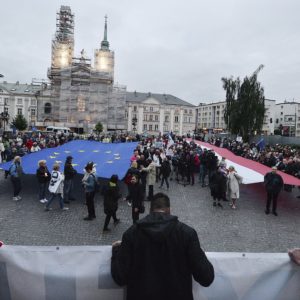 In this July 1, 2018 photo Poles protest against new legislation on the Supreme Court that will force the retirement of more than a third of the judges to the top court, in Warsaw, Poland. The European Union opened a rule-of-law procedure Monday against Poland over what it sees as flaws in Poland's Supreme Court law, intensifying a standoff that is threatening Poland's EU voting rights and funding. (AP Photo/Czarek Sokolowski)
[IS] Opinions

Urgent Need for U.S. to Oppose Threat Against Judiciary in Poland

As another Fourth of July approaches and Americans prepare to celebrate their independence under the world’s most enduring constitutional democracy, some of the newest democracies — many of which the United States inspired and helped establish — are struggling to survive.

According to Freedom House’s annual report on Freedom in the World, 2018 marks the 12th straight year that authoritarianism increased worldwide. Once-democratic governments, wrestling with the inevitable frustrations of delimited power and popular criticism, now pay cynical lip service to democratic ideals or have abandoned them altogether.

Poland offers an especially poignant example. There the Law and Justice Party, which returned to office in 2015, has worked systematically to amass and consolidate power by dismantling the courts.

New legislation will force about 40 percent of the Polish Supreme Court into retirement on July 3 unless the president decides, at his sole discretion, to extend their service. In addition, more than half of the National Judicial Council, charged with nominating qualified Supreme Court judges for appointment by the president, has been purged, replaced by new members with strong and reliable ties to the ruling party.

Meanwhile, other legislation criminalizes free speech; allows any case that has been resolved in the last 20 years to be re-tried by judges beholden to the current government; and permits the imposition of prison sentences on people previously acquitted of crimes. While the recent amendment to the “Holocaust Law” to remove provisions that criminalize free speech is laudable, it should not distract attention from other actions that will strip the Supreme Court of its independence.

Recognizing the threat these measures against the judiciary pose to their young democracy, thousands of Polish citizens have taken to the streets in protest. They have been supported by such legal organizations as the Warsaw Bar Association, the judges’ association Iustitia, the association of Prosecutors Lex Super Omnia and the Helsinki Foundation for Human Rights, which have called on the international community to stand in solidarity with them to defend democratic governance in Poland and elsewhere in Central and Eastern Europe.

The United States must answer this call. Beyond the moral imperative of supporting democracy for its own sake, the United States has economic and security interests at stake as well. The nominee for U.S. ambassador to Poland, Georgette Mosbacher, stated in her confirmation hearing that her “top priority if confirmed will be to encourage American businesses to expand trade between our two nations.”

Yet the uncertainty created by the loss of judicial independence in Poland, a major U.S. trading partner, will be an enormous impediment to achieving this goal. What guarantees do U.S. investors have that they will be able to enforce agreements in a Polish court? Without an independent judiciary to ensure the rule of law, what protects the Polish economy from capture by would-be oligarchs, as has happened elsewhere in the region?

On the security front, Poland today is an EU member state and a key NATO ally.   As the Polish government subsumes the judiciary, populist parties in the region and elsewhere are watching for repercussions from the major democratic powers. Seeing none, they may well be emboldened to follow suit, destabilizing the region and, in the process, weakening American security.

Given these developments and its own hard-won experience with democratic governance, the United States must renew and reinvigorate its support of democracy. The U.S. president should appoint a special envoy to address democratic retrenchment in Poland and the region. He also should encourage the institutions created to preserve democratic governance in Europe — including the Organization for Security and Cooperation in Europe and NATO — to monitor and hold accountable those politicians who undermine judicial independence and the rule of law and endanger the rules-based order on which our mutual security and freedom rely.

On this anniversary of American independence, the urgency of such action cannot be overstated. From her view at the highest level of the American judiciary and as a longstanding champion of the rule of law globally, former U.S. Supreme Court Justice Sandra Day O’Connor once observed that “judicial independence does not just happen all by itself. It is tremendously hard to create, and easier than most people imagine to destroy.”

Hilarie Bass is president of the American Bar Association.