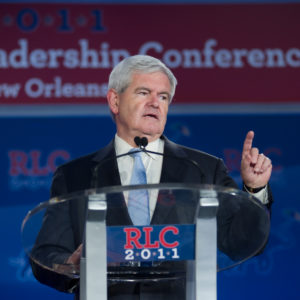 Love him or hate him, there’s never been a presidential candidate quite like Donald Trump, and there’s never been a presidential campaign season quite like the one the nation is currently experiencing. All the ordinary rules long etched into political science textbooks about how politicians should walk, talk and strategize have been tossed out the window.

It’s a new political world, and that makes the political-prediction business as unreliable as the weather — and at times, as volatile as hurricane season.

But this is precisely why at this chaotic moment in U.S. history, when it feels as though almost anything can happen, Trump will likely pick as his vice-presidential running mate Newt Gingrich, a well-established, well-known political insider. The Gingrich choice would expand Trump’s image as a renegade outsider hell-bent on tearing down the status quo, by bringing in a politically experienced and astute partner whose mastery of the inside game of national politics once made him extraordinarily effective in forcing change.

Gingrich would surely be an interesting pick. Despite his long history in the Republican Party, he doesn’t fit the conventional mold for a modern Republican vice-presidential candidate. He isn’t young and energetic; he can’t deliver Trump an important swing state such as Iowa, Florida or Ohio; and he wouldn’t make a particularly spectacular ambassador to minority groups, those living in urban city centers, or to women — groups polling show Trump is struggling to win over.

What Gingrich can bring to the table, however, is a storied, policy-centered past. As speaker of the House from 1995 through 1998, he achieved several important, pro-liberty policy victories.

In 1996, Gingrich worked to implement much-needed welfare reform, which led to a nationwide decline in welfare rolls of 70 percent. Many of the reform ideas Gingrich promoted and urged lawmakers to adopt at the state level — including time limits, work requirements and asset tests — are still being discussed and advanced today in state capitals across the country.

Throughout the 1990s, Gingrich and the Republican-led Congress oversaw tremendous economic growth, and under Gingrich’s leadership, Republicans demanded President Bill Clinton agree to important government spending cuts, which eventually led to a budget surplus, a feat that now seems virtually unthinkable. They accomplished all this despite reports released in 1995 from the Office of Management and Budget and the Congressional Budget Office predicting $200 billion budget deficits for the rest of the 1990s.

Gingrich’s congressional history, while impressive, is by no means a perfect picture of pure conservatism. In the 1980s, Gingrich opposed drilling for oil in the Arctic National Wildlife Refuge, before reversing course on drilling in the late 2000s. In the 1990s, Gingrich supported a government-imposed individual health insurance mandate. In 2008, he acknowledged on ABC’s “This Week” he would have voted “reluctantly” for bailing out failing billion-dollar banks had he still been in Congress.

Although Gingrich may not be the most charismatic or exciting potential vice- presidential pick, he does have something to offer almost everyone Trump needs to bring together if he’s going to capture the White House in November.

Gingrich is one of the few mainstream conservative voices to have supported Trump from the beginning (or close to it), making him a palatable choice for Trump’s devoted base. Gingrich can appeal to middle-of-the-road voters and those skeptical of Trump’s lack of governing experience, thanks to his own decades-long career in Washington.

Most important, in a year when few may actually be willing to sign on to Trump’s controversial campaign, Gingrich has repeatedly indicated he is interested in the job — and that may very well prove to be the most important qualification of all.