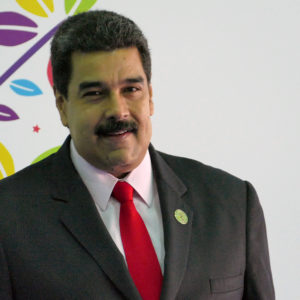 Venezuela Could Define the Trump Doctrine as Soft-Power Success

Posted to Politics February 28, 2019 by Joshua Sande and Jon Decker

President Trump was recently presented with one of the greatest foreign policy tests of his administration when Nicolas Maduro’s regime closed its doors to humanitarian aid attempting to enter Venezuela by land and sea.

Despite the United States’ dubious history of intervention in Latin American politics, the administration has been right not to ignore the political and humanitarian crisis unfolding south of our border.

If the Trump administration continues to respond to Venezuela as a humanitarian crisis (rather than a military one) by continuing to fight for the delivery humanitarian aid and laying the groundwork for a negotiated political settlement, Trump will have the opportunity to score a meaningful diplomatic and foreign policy win for his administration.

From the outset of the crisis Maduro’s government has increasingly resorted to violence, arbitrary detention of dissenters, and other repressive tactics favored by dictators the world over. Venezuela’s currency has depreciated in value to the point of worthlessness — contributing to widespread food shortages and giving rise to the phrase “the Maduro Diet,” illustrating a crisis so severe that some have reportedly slaughtered zoo animals for food.

It is little wonder then that more than 3 million Venezuelans have already fled the country; a number that’s sure to rise if needed food and medical supplies are continually blocked.

Trump campaigned on the promise to end our indefinite involvement in conflicts in the Middle East and elsewhere. Military interventions there have been a driver of regional instability as well as a refugee crisis that has had ripple effects throughout Europe. But as we wind down our military presence in places like Syria, an opportunity presents itself for America to redefine its role on the global stage and for Trump to begin to define his foreign policy legacy.

The administration’s response so far shows that the United States is still uniquely placed to coordinate and leverage international pressure to achieve through peace what force cannot. Soon after Trump recognized Juan Guaido as Venezuela’s only legitimate, democratically elected leader, the overwhelming majority of Central and South American countries followed suit. At present, 50 countries comprising regional powers as well as important European allies stand in opposition to Maduro’s continued reign.

The next step must be the alleviation of human suffering in Venezuela.

Maduro has used the prospect of U.S. military intervention as pretense to deny aid shipments and put the military on high alert, but the worsening economic situation and U.S.-led show of unity against him has weakened his position significantly. At present, the military’s support for Maduro is the only thing preventing the distribution of aid and the organizing of new elections — and the dozens of defectors this past weekend show their support for Maduro is increasingly waning.

This being the case, the best course of action is to shore up the resolve of the international community, continue to earnestly offer assistance to Venezuelans in need, and pressure and shame Maduro on the international stage for ensuring the suffering of his own citizens in hopes of holding onto power.

We believe strongly that reports of the decline of American soft power have been greatly exaggerated, and that the Trump administration can use it to great effect in Venezuela. By mobilizing the international community to speak with one voice against Maduro, vocally supporting free and fair elections, and providing humanitarian assistance to those who are suffering, Trump can flip the page on American foreign policy.

The “Trump Doctrine” can be one of re-establishing and effectively using American soft power to promote freedom and democracy without forceful intervention.

Joshua Sande is a former researcher at the Geneva Centre for Security Policy and a graduate student in International & European Politics at the University of Edinburgh. Jon Decker works on behalf of several free market non-profit organizations. They wrote this for InsideSources.com.