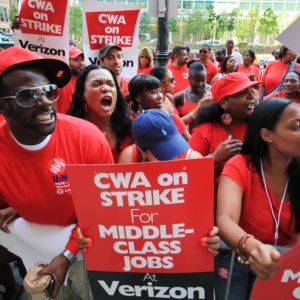 Bill Deegan, a New York Verizon worker, ended his membership with his union and returned to work just a couple weeks into a nationwide strike earlier this year. The Communications Workers of America (CWA) allegedly responded by pressuring him to attend a special union court before giving him a fine. Deegan and six other workers filed a lawsuit charging that the union response was illegal.

“What they’re doing is wrong,” Deegan told InsideSources. “They should acknowledge the fact we resigned and just drop it. They have the paperwork; they have what we gave them; they know when we came back to work. It’s just the local union bullying the people that decided that they don’t want to be on strike.”

“I did go out for two and a half weeks but after two and a half weeks the company notified us that that it could no longer pay our medical and benefits because we were on a strike,” Deegan said. “My wife and I are both getting ready for retirement; there’s no way I can’t work. So I resigned from the union and went back to work.”

The troubled contract talks even received attention from federal mediators when it was clear it had reached an impasse.  Labor Secretary Thomas Perez helped keep the negotiations going until they eventually reached a deal. Deegan notes it was after the strike had ended that the union started to come for him.

“I started to receive letters from the union,” Deegan said. “The first one told me that I was found in violation of whatever the union disclosed. The second letter indicated that they were going to have a trial. And the third letter, they had the trail in my absence, and they were going to fine me.”

The lawsuit alleges that the employees had the right to leave the strike so long as they resigned from the union. Deegan and the other employees, however, continued to be pressured to attend the union court which was then followed by thousands of dollars in fines. Deegan sought legal help after doing some research into the matter.

“As far as I know, I did everything properly and the union just continues to persist, and I don’t think to say its harassment or distortion,” Deegan said. “I don’t know what to call it.”

Deegan eventually reached out to the National Right to Work Foundation (NRTW) for legal help. The group advocates for worker choice policies and provides free legal assistance to workers who believe their rights are being attacked by their union. NRTW agreed to help and announced the lawsuit Oct. 18.

“What’s troubling is they made threats in those letters,” Deegan said. “If we don’t respond to this email of theirs within 30 days, they have a right to assume that we are guilty and accept their findings and we have to pay the fines or it goes to a debt collection agency.”

Deegan notes the company even informed its workers they could resign from the union and go back to work. Verizon reportedly sent emails with direction on how do to go back to work during the labor dispute. Deegan sought help from the company after the strike but was told it was a conflict between the workers and the union.

“In a way, that is very disheartening that they would put that stuff out there and not put some muscle behind it or put something behind it,” Deegan said. “On the other hand, I understand the company doesn’t want to create more problems with the union than they already have.”

The eventual contract agreement included a 10.9 percent raise for workers over the next four years among other benefits. It also included outsourcing protections so workers wouldn’t have their jobs shipped overseas.

The National Labor Relations Board received the lawsuit and is now waiting for the workers to submit their affidavits. The CWA did not respond to a request for comment by InsideSources.