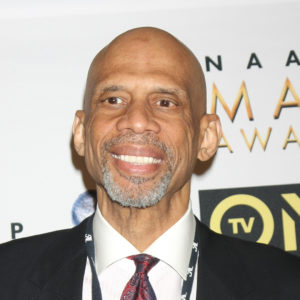 Kareem Abdul-Jabbar came to the nation’s capital last week in the role of a de facto adviser. He disseminated his advice without hesitation, though with sort of an avuncular wisdom.

First up, he offered his observation on interpersonal relationships from a national perspective regarding the political arena: “We’ve gotten to a point where we can’t speak to each other.”

How do we overcome that engagement deficit with others: “Unless you can listen with an open mind and express yourself without bitterness, you can’t have a dialogue.”

And to promote his book: “Writings on the Wall: Searching for a New Equality Beyond Black and White.” The book essentially is an exploration of the division in America among racial, age, gender and political lines.

He also brought some real news to the East Coast from his home in Southern California. The 7-foot-2 Abdul-Jabbar — who was introduced by the NPC president as the tallest guest speaker ever at the venue — announced plans for a regional holding company to be based in Dubai. The company, called Global Skyhook Connections Ltd., is set to serve as the base for several enterprises.

Among Abdul-Jabbar’s scheduled projects is the establishment of an International Hall of Fame for Muslim Athletes as part of a tourism project. “Dubai’s meteoric rise since the 1990s has produced a fast-paced, innovative hub offering a first-rate locale for our regional headquarters,” he said.

The former Los Angeles Lakers-Milwaukee Bucks center spoke of his support for San Francisco 49ers quarterback Colin Kaepernick, who has created a firestorm of controversy because of his refusal to stand during the playing of the national anthem in an apparent attempt to draw attention to perceived social injustices in law enforcement.

“I had a chance to talk to Colin Kaepernick,” Abdul-Jabbar said. “He wants to make our country a better place — as do I.”

Remember, Abdul-Jabbar has a history of involvement in social activism, especially during his college days at UCLA when he was known as Lew Alcindor before his Muslim conversion. After UCLA won the national championship in 1967, Alcindor appeared with an elite group of other black athletes for a show of support for Muhammad Ali, who sparked an often contentious national debate when the then-heavyweight boxing champion refused induction into the U.S. Army during the Vietnam War. At a news conference in Cleveland, led by Cleveland Browns great Jim Brown, Abdul-Jabbar appeared with Boston Celtics star Bill Russell, Green Bay Packers Hall of Famer Willie Davis, Ali and several others.

In October 1968, Alcindor, after winning his second national championship at UCLA, boycotted the Olympic Games in Mexico City, along with basketball teammates Lucius Allen and Michael Warren. The trio’s stance signified their commitment and support for the Olympic Project for Human Rights, which, six months after the assassination of the Rev. Dr. Martin Luther King Jr., sought to bring attention to the ills of segregation and unequal racial treatment in U.S. society.

Abdul-Jabbar also spoke during the Democratic National Convention, back in August in Philadelphia. Remember, he introduced Khizr Khan, the Gold Star father of a Muslim U.S. Army soldier killed in Iraq. The elder Khan called out Donald Trump because of the Republican candidate’s proposed ban on Muslims entering the United States.

“The current election has really pulled the scar off the racial divide in America,” Abdul-Jabbar said. “What Donald Trump has to say about Muslims and immigrants coming to our country, many of those things are reprehensible.”

As for solutions to the policing divide, Abdul-Jabbar advocated a change of heart among Americans, especially black citizens and law enforcement, and a recognition of our common humanity.

“The racial conversation must begin neighbor to neighbor,” he said. “For people in minority communities, instead of talking about THE police, it’s time to talk about OUR police.

“As for the police, instead of talking about THOSE people, it’s time to talk about the people WE are sworn to protect.”

Though Abdul-Jabbar shot his unparalleled sky hook shot only eight to 12 feet from the basket, he showed far greater range in his ability to discuss a wide range of topics during the question-and-session of his Press Club appearance. Such as:

—Favorite television genre: “I used to watch ‘Sherlock Holmes’ on TV, with (actor) Basil Rathbone, when I was in high school.”

—Favorite reading: “I like crime fiction. I read Sir Arthur Conan Doyle my rookie year in the NBA. I also like Walter Mosley and Elmore Leonard.”

—Biggest regret: “I should have stayed with my piano lessons when I was a kid. I gave up on Brahms and Beethoven … to play baseball instead. Then basketball worked out pretty good.”

—Cures for writer’s block:“Sometimes you have to take a day off. Sometimes a day of rest allows you to refresh yourself.”

—President Barack Obama’s love of basketball: “The president hasn’t offered to play me. But I would be happy to give him some pointers.”

Now, point the arrow back to his social and political philosophy.

—What makes us Americans? “We are Americans when we pledge allegiance to the United States of America. Our Constitution is the most dynamic document ever created in our country.”