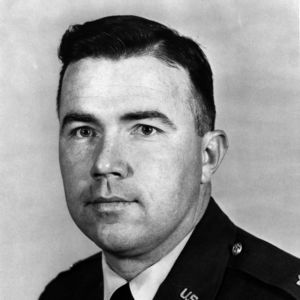 Cadets at the U.S. Military Academy in West Point are described as the long gray line, an image that connects them with those who have trained and served before. While they are the only cadets to wear gray uniforms, the connection between the past and the present is shared by the military’s officer training programs more generally. This was connection was emphasized again and again at the American Veterans Center annual conference, an event where cadets months from graduation mingled with decorated veterans and heard stories of valor and courage.

On paper, Lt. Col. Bruce P. Crandall is a courageous leader. He was awarded the Medal of Honor in recognition of his heroic actions as a helicopter pilot in Vietnam, when he flew through heavy enemy fire to deliver ammunition and evacuate casualties during a mission in the la Drang Valley.

His official citation says that his actions, “instilled in the other pilots the will and spirit to continue to land their own aircraft, and in the ground forces the realization that they would be resupplied and that friendly wounded would be promptly evacuated. This greatly enhanced morale and the will to fight at a critical time.”

In person, Crandall is a charming man with bright blue eyes who jokes about the Army Good Conduct Medal he says he shouldn’t have gotten. When he talks of Vietnam, his focus is not on his own actions, but the men he served with and their struggles both during the war and as they returned home.

These were sacrifices not just of blood and treasure, but, on a personal level, of lost time and lost dreams. For Crandall, tearing a rotator cuff while throwing a hand grenade put an end to his dream of playing professional baseball. He jokes now that he always wanted to be drafted—only by the Yankees, not the Army, but it was a bitter loss.

Others are more permanent scars. While the soldiers shipped out as a unit, they returned home one by one, often wounded. Once back stateside, they lost the camaraderie that had sustained them in combat. The scars of these trials remain, even decades later. Today, Crandall travels with “Huey” a service dog who helps him both with his hearing and with the lingering effects of PTSD.

“We don’t call it PTSD anymore in the Army,” says Crandall, who emphasizes that the effects are not a disorder. “Everyone gets it at some time.”

This is one reason why Crandall finds veterans organizations so important and why he makes a point of attending events like this one. They offer an opportunity to form the support network that many vets need, but are also provide important mentoring opportunities for young cadets. During breaks in the schedule, he was easy to find—cracking jokes while surrounded by a crowd of eager, uniformed listeners.

His message seems to be getting through. One young woman, a senior at The Citadel, was searching the schedule for Crandall’s talk. She said proudly that she already had a business card from and two pictures with Crandall. Today she was after another.

Crandall was only one of a highly-decorated and historic line of speakers, men and women who had fought in different wars and different branches of service but shared a commitment to mentoring these young officers in training.

Over the course of the day, veterans from conflicts stretching back over seventy years echoed a commitment to duty and sacrifice, traits which they hoped to cultivate in the young cadets listening to them. As shown by the stories of their experiences, leadership is a trait which leads by example and inspires others to behave similarly.

At the same time, the stories they told reiterated a sense that sometimes heroism was a result of being in the right place at the right time. Richard Cole, the last surviving member of Doolittle’s Raiders, spoke of how the nascent Army Air Corps asked for “volunteers for a dangerous mission” to bomb Japan in 1942. He, a co-pilot, and another pilot he had been flying with decided to volunteer.

“But that gentleman had some kind of misfortune and couldn’t show up,” said Cole. Instead, Cole flew as the co-pilot for Doolittle himself. It’s a story he has told many times before, but, like the other speakers, he realized that this event was a chance to reach ears that hadn’t yet heard his story. Telling it again was part of his giving back.

At end of their time to talk, the veterans repeatedly emphasized that their role was complete. Now the responsibility to serve, protect, and defend rests on the young shoulder of the cadets sitting in the audience.

“We’re going to elect another president now that’s gonna have a hand on a nuclear war, and nuclear war scares the devil out of me,” said Captain Jerry Yellin, who enlisted as a pilot after Pearl Harbor and later flew the final combat mission over Japan.

“You in this audience are the front line,” he told the cadets. “You have a responsibility to protect our world now.”

Like many of the other speakers, he emphasized that his role was finished. The responsibility had been passed along to a new generation. It was part of a commitment to service, both general and personal, that flowed through many of the panels as they discussed everything from veterans in business to fading

This commitment to service is both general and personal. The veterans described it not only in terms of their sense of duty to their country, but in terms of the relationships they built with the men around them.

His sentiment was echoed by officers still in the service.

This is the focus that led many of them to volunteer and which also pushed them to come here to Washington to spend a day retelling old war stories. But these are not just stories. They are an inspiration, an encouragement, and also a challenge.

It’s advice about the importance of humility and service that can apply to anyone, civilian or military.

“I live my life today like a banker looks at my checking account,” said Yellin. “Yesterday was a cancelled check, can’t spend that again. Today’s money in the bank; I can spend what I’ve got today. I can do something today. Tomorrow’s a promissory note. I don’t know if I’m going to get tomorrow. Nor do we.”