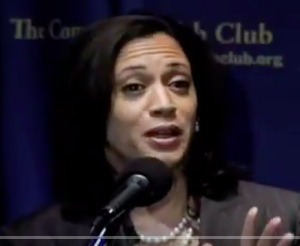 While Sen. Kamala Harris (D-CA) was talking to CNN’s Jake Tapper Monday night about her 2020 POTUS bid, hundreds of thousands of people were on Twitter watching a speech the former California D.A. and attorney general gave back in 2010. In the speech, Harris brags about threatening parents with prosecution–and possible jail time–over their children’s skipping school.

“I believe a child growing without an education is tantamount to a crime,” Harris told the crowd at the Commonwealth Club in San Francisco.  “So I decided i was going to start prosecuting parents for truancy.”

“As a prosecutor in law enforcement, I have huge stick. The school district as a carrot. Let’s work together in tandem…to get those kids in school,” Harris said. She also bragged about the power of her D.A. office letterhead–with a large police badge logo at the top– to frighten parents and families when they received her letter outlining the possible legal consequences of truancy.

One clip of the speech was viewed nearly 1 million times the first day it hit Twitter. 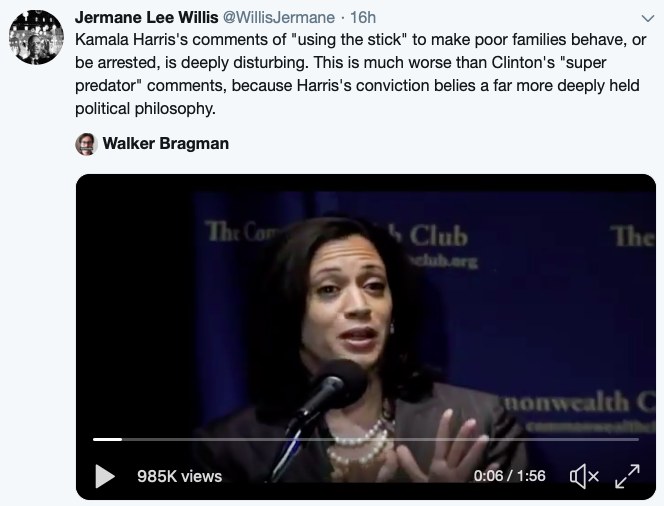 As soon as Sen. Kamala Harris’s name made the potential 2020 candidate list, liberals began raising questions about her aggressive record as a prosecutor in California. Now her speech she gave touting her policy of threatening parents with jail time over their children’s truancy is raising the question of where “tough” crosses over into overzealous, particularly in a political environment where liberals are lobbying against what they describe as “mass incarceration” and for criminal justice reform.

Under laws at the local and state level promoted by Harris, parents of truant kids faced a $2,000 fine or a yearlong jail sentence.  It’s orthodoxy on the left that truancy laws disproportionately impact poor families and people of color, and in fact Harris’s law sent some moms to jail.  And yet she continued to champion it throughout her career.

“We are putting parents on notice,” Harris said in her inaugural speech as California’s attorney general. “If you fail in your responsibility to your kids, we are going to work to make sure you face the full force and consequences of the law.”

This is a side of Sen. Harris many progressive voters are just learning about, and it doesn’t appear to match the “criminal justice reform” moment.  The meme “Kamala Harris is a cop” is popping up in progressive social media. Liberals activists are sounding the alarm. Loyola law professor Lara Bazelon recently penned an op-ed for the New York Times entitled “Kamala Harris Was Not a ‘Progressive Prosecutor’”

Sen. Harris’s campaign rollout has been pitch-perfect. Her crowd of 20,000 supporters at her announcement in Oakland was impressive. But if criminal justice reform becomes a key issue in the 2020 Democratic primary, she will have a lot of explaining to do.