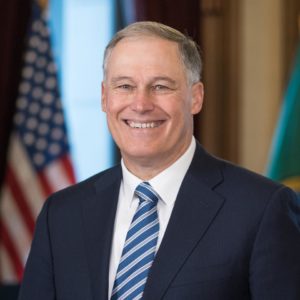 At both the state and federal level, government often works with private groups to take advantage of the industry knowledge and specialization. But new documents uncovered through a Freedom of Information Act request by the Competitive Enterprise Institute show that the Washington Governor’s Office took this cooperation a step further, directly coordinating press responses with climate activist groups, particularly Climate Nexus, as it worked to set up the United States Climate Alliance.

In one June 5 email, Ricketts asked Nesbit to call him “asap” to coordinate the coalition’s messaging.

“Sounds like we states have some particular, and substantively very valid, concerns about how this coalition is messaged,” wrote Ricketts. “If not met I think states will pull out.”

“OMG, come on. I’ve been dealing with this all weekend,” Nesbit replied. “We’re not messaging it incorrectly at this point. But yes, I’ll call you.”

The United States Climate Alliance was created by Governors Andrew Cuomo of New York, Jay Inslee, and Jerry Brown of California after the Trump administration pulled the United States out of the Paris Climate Agreement. The alliance, which describes itself as a bi-partisan coalition of states, is “committed to the goal of reducing greenhouse gas emissions consistent with the goals of the Paris Agreement” through coordinated action at the state level. The group has not been in existence for very long and, so far, has focused its attention on building a website that will coordinate climate tools, information, and data for use by both state governments and private citizens.

Other emails show that the relationship went further, with Nesbit appearing to provide media relations services for the governor’s office, including sending a joint statement from Inslee, Brown, and Cuomo to the New York Times.

“Do you have it? Is it approved? Is Inslee available to talk to the NYT and others today before Trump does his Rose Garden ceremony at the WH?” Nesbit wrote in an email on June 1.

For Chris Horner, the CEI senior fellow who requested the documents, the emails raised questions about the propriety of a public official accepting services without paying for them.

“It is inarguable. They are being given very expensive staff time and services,” said Horner to the Washington Times. “These governors should immediately release all details about the collusion with these groups, who themselves have a lot to answer for.”

“There is this blurry line between public interests organizing events for the governor and taking advantage of that,” he said. While the conflicts of interest were not as blatant as in Oregon, where Governor John Kitzhaber was forced to resign in 2015 after his fiancee was revealed to be working both as First Lady and for an environmental group, Inslee has used environmental groups to organize events in the past.

The chairman of the Washington Conservation Voters organized events for Inslee in the past, says Myers. While Washington’s strong public disclosure laws did lead to some openness about this arrangement, it was not widely publicized that these events were not being organized by the governor’s office.

“I don’t think people realized the extent that it is going on. I think it’s not an issue that has been addressed so far. The emails that CEI uncovered are the most obvious example of this sort of behavior,” says Myers, adding that while the behavior may not be a technical violation of state statute, it does run afoul of the principles of government transparency.

“There are the laws and there is what is transparent and ethical and those two things are not always the same,” he said.

Inslee’s office defends the relationship, saying that “it would be a mistake” to suggest that Climate Nexus had ultimate responsibility for the messaging surrounding the campaign.

“The Climate Nexus team is in place to help collaborative efforts working on affecting climate change and they supported the Alliance efforts by reviewing and distributing press materials and doing other media outreach,” said Chris Davis, senior adviser for climate and energy affairs for Inslee’s office, who described the team’s work as collaborative and in a support role. Davis did not comment as to how common it was for the governor’s office to turn to outside groups for these types of services.

Even if the relationship between Inslee’s office and Climate Nexus is legal under state law, it does signal that his administration is comfortable working closely with environmental groups that have ties to major liberal donors.

Climate Nexus is linked to a number of prominent liberal donors from which it derives funding. In 2016, it received a two-year, $400,000 grant from the Rockefeller Philanthropy Advisors, earmarked for advancing public and policymaker awareness of climate change. The Rockefeller Philanthropy Advisors is a nonprofit that both advises and manages charitable giving and traces its heritage back to John D. Rockefeller. Today it also handles charitable gifts made by other people and organizations.

In this role it received a grant of $10,000,000, split over three years from the MacArthur Foundation that was also intended to benefit Climate Nexus.  The MacArthur Foundation, one of America’s largest private foundations, is considered to be one of the pillars of liberal philanthropy and has supported these causes for the past several decades.