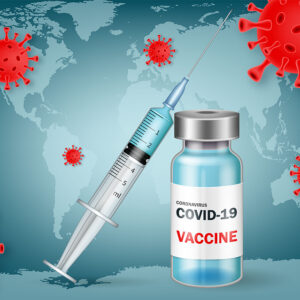 There is a significant disparity in global COVID-19 vaccinations. Developed countries like the United States, Canada, and the United Kingdom have vaccinated more than half their populations. In contrast, some less developed countries have vaccinated less than one percent of their populations. Discussing this disparity, Mamta Murhi, the World Bank’s Vice President for Human Development, tweeted that the situation where “the poorest countries are being left behind in the race to vaccinate” its populations is “absolutely unacceptable.”

In response to this disparity, the governments of South Africa and India, and 62 other nations have called for intellectual property protections preventing other countries from producing their own vaccines to be waived. South Africa and India have contended that the World Trade Organization’s (WTO) Trade Related Aspects of Intellectual Property Agreement (TRIPS) prevents them from manufacturing vaccines and depressing vaccination rates in poorer countries. These governments believe waiving the TRIPS Agreement could allow developing countries the ability to “expedite the development, manufacturing, and marketing of tests, treatments, and vaccines.”

Unfortunately, waiving intellectual property protections will do little to boost global vaccination rates and may ultimately prevent future vaccine developments for the next global pandemic.

In the context of COVID-19, waiving the TRIPS Agreement could provide governments in developing countries the ability to “expedite the development, manufacturing, and marketing of tests, treatments, and vaccines.” In their original argument to the WTO, India and South Africa raised a concern that “intellectual property rights such as patents, industrial designs, copyright and protection of undisclosed information… create barriers to the timely access to affordable medical products including vaccines and medicines…essential to combat COVID-19.”

One flaw in the proposal to waive the TRIPS agreement is that most developing countries do not have the manufacturing and distribution facilities to get vaccines to their citizens. For example, India is producing about “2 million doses each day” but needs to “vaccinate between 6 and 7 million” to slow the spread of the virus. In a recent interview with Quartz, Adar Poonawalla, CEO of the Serum Institute of India, stated he would need $400 million to scale production at his facility to the levels necessary to support the country’s vaccination efforts. South Africa, on the other hand, “does not have large-scale vaccine manufacturing capability.”

The limited production capacity of countries like South Africa and India means that even if they had the information needed to produce vaccines, they could not currently manufacture and distribute domestically. This fact alone makes clear that waiving the TRIPS Agreement is a symbolic move.

The United States, on the other hand, has a growing production capacity that enables it to produce 3 million doses each day. In fact, U.S. vaccine production has allowed Washington to donate millions of vaccines to other countries that cannot make their own. As of August 3, the United States has donated more than 110 million doses to 60 developing countries.

Waiving intellectual property protections could also harm the ability of pharmaceutical companies to develop vaccines for future viruses and diseases. Pfizer and other vaccine manufactures have reportedly invested $1 billion into developing its COVID vaccine, with no guarantee of success, and pledged to make no profit. The pledge from pharmaceutical manufacturers to make no profit from their COVID vaccines has resulted in an abundance of cheap vaccines.

Waiving TRIPS, and allowing other countries to make their own vaccines, would mean that pharmaceutical companies are unable to recoup their investments, leaving them less able to help fight future pandemics.

One method that has proven successful at getting to developing countries is the global COVAX program. Ran by Gavi, a public-private global health partnership, COVAX aims to provide “innovative and equitable access to COVID-19 diagnostics, treatments and vaccines” to poorer countries. Since its first delivery to Ghana in February, the COVAX program has provided over 203 million COVID vaccines to 138 countries. In June, G7 nations pledged to provide over 870 million COVID does to poorer countries by the end of 2021.

The significant benefit of COVAX is it does not require countries without the manufacturing and distribution capacity to produce their own vaccines. Indeed, with further investments from governments, COVAX would be better placed to provide vaccines to those in less economically developed countries.

It’s universally agreed that the best way to end the pandemic is to get shots in the arms of people in both developed and developing countries. This belief is undoubtedly why less developed countries are pushing to waive the TRIPS agreement. But, unfortunately, for governments in less developed countries waiving TRIPS will do little to boost global vaccination rates and may have longer-term consequences for fighting future pandemics. Rather than punishing pharmaceutical companies, governments should be investing in the already success-proven COVAX program.