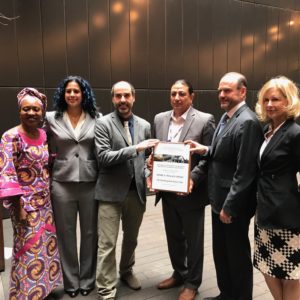 Is environmental activism paying off for the Standing Rock Sioux tribe? Although its high-profile protest against the Dakota Access Pipeline helped make the tribe a national symbol of activism, fame came at a high price. Revenues at the tribe’s casino, one of its chief employers, were down sharply in 2016, forcing painful social service cuts. At the same time, the tribe continues to benefit from the esteem of liberal foundations. On Thursday, the Wallace Global Fund awarded the inaugural Henry A. Wallace Award and a $250,000 prize to the tribe for “for its unyielding courage in the fight against the Dakota Access Pipeline, and its dedication to transitioning to renewable energy.” Along with the award, the Wallace Global Fund has pledged up to $1 million of investments in the tribe’s transition to clean energy.

“We hold the Standing Rock community in high regard for their care for human and ecological well-being,” said Scott Fitzmorris, co-chair of the fund and great-grandson of Henry A. Wallace, its founder. “By resisting the dysfunctional narrative imposed by the fossil-fuel industry, Standing Rock has demonstrated what it looks like to prioritize well-being over profit for the few.”

This is the first year that the fund has presented the Henry A. Wallace Award, which was created to “lift up the extraordinary courage and will it takes to stand up to oppressive corporate and political power.”

“Our foundation is guided by my grandfather’s framing of a mighty struggle that continues to this day: protecting the interests of what he called the ‘common man’ – ordinary people – against the oppressive combination of corporate and governmental power. Democracy, he said, ‘must put human beings first and dollars second,'” said Scott Wallace, co-chair of the Wallace Global Fund.

While human beings may come first, dollars are still important. The grant money comes at a time when the community of Standing Rock is still grappling with the economic effects of the pipeline protest, which cut off access to the reservation’s largest towns and to the tribally-owned casino. In 2016, casino revenues decreased from approximately $14 million in 2015 to less than $9 million. Casino revenues are used to fund a variety of social services on the reservation.

Tribal Chairman Dave Archambault II, who became the face of the tribe’s resistance, is running for re-election this summer. He is currently one of 10 candidates campaigning before a primary vote on July 19. A run-off election between the final three candidates will take place in September. Already, some tribe members have grumbled about the way Archambault handled the protests and the elections have already garnered more statewide attention than usual.

Grant money may help to make up some of the tribe’s protest losses. However, it is unclear how much effect further donations will have on the reservation’s economy. Median household income in Standing Rock is only $21,625, despite many federal grants.

In 2015, the Department of Education awarded the tribe an education grant worth nearly $1.5 million. At the time, the tribe said that the grant money would be spent on a new education code and work on building a student data collection for the 10 schools on their reservation. It was one of only seven such grants given out nationwide that year.

In 2014, the Standing Rock tribe was given a $1.4 million grant to help establish the SRST Institute of Natural History. The grant came from a program of the Department of Health and Human Services and was added to grants from JATC and the State Historical Society of North Dakota to establish a tribal institute of natural history. The institute was estimated to create 9 jobs for the duration of the four-year grant.

A mere 8,200 people live on the Standing Rock reservation. Population density is so low that the largest town, Cannon Ball, N.D., has fewer than 400 residents. It remains to be seen if the Wallace Global Fund grant will be able to foster more economic development than previous efforts.