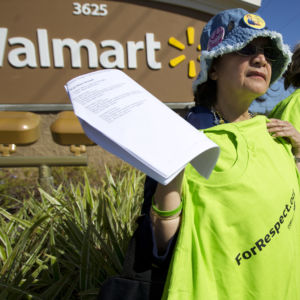 Walmart was denounced in the wake of offering workers wage increases and bonuses Thursday by a union associated group that has long sparred with the retail giant.

Walmart joins a growing list of other large companies who have announced bonuses and pay raises in response to a recently enacted tax reform law. The retailer plans to increase starting salaries to $11.00 an hour and provide a one-time thousand dollar cash bonus for eligible associates.

Making Change at Walmart (MCAW), a union associated campaign, responded to the announcement by denouncing it as a publicity stunt – while also taking issue with associated stores closing their doors on employees. MCAW Director Randy Parraz argues the decision to increase wages is a distraction.

“While pay raises are usually a good thing, this is nothing but another public relations stunt from Walmart to distract from the reality that they are laying off thousands of workers,” Parraz said in a statement. “The ones who remain will continue to receive low wages.”

President Donald Trump achieved his first major legislative victory Dec. 22 by signing a bill into law that overhauls the tax code. The legislation promises to boost economic growth by lowering rates for corporations and small businesses. Several companies have since announced plans to invest more back into their employees.

Walmart also promised that it will expand maternity leave policies and provide financial assistance to workers trying to adopt a child. But the announcement came within hours of a separate decision that it would be closing 63 Sam’s Clubs stores – potentially impacting thousands of workers.

The MCAW has fought against the retailer on many employment issues like wages and benefits. The campaign has primarily utilized protests – with its annual Thanksgiving strikes becoming one of the more notable. Parraz, however, argues the recently announced wage increase falls short of an acceptable amount.

“The fact is that Walmart is not permanently investing the estimated $2 billion it will receive annually from Trump’s tax giveaway to its workers – it is keeping almost all of it,” Parraz said. “This announcement is an attempt to repair a crumbling image, while ignoring thousands of its workers who struggle year after year to pay their bills or depend on government assistance.”

The MCAW is primarily backed by the retail and service union the United Food and Commercial Workers (UFCW). The union has been particularly aggressive against Walmart which it has often denounced as a bad and irresponsible employer. The UFCW also works to unionize stores while fighting the company.

“Instead of taking Walmart at its word, we would hope that the Members of Congress, civic and state leaders, and the media, ask Walmart for actual facts about what this means for workers,” Parraz said. “Empty words will not lift Walmart workers out of poverty, an actual living wage will.”

The MCAW also takes issue with the wage increase not impacting every worker throughout the company. The decision essentially increases wages for anyone making below $11.00 an hour – but anyone already making above that, the union argues, might not see anything except the bonus.