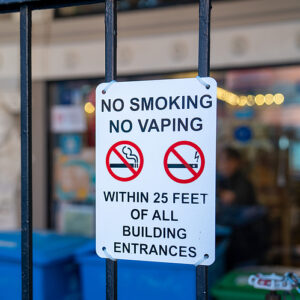 It sounds like a Massachusetts public health miracle. In 2007, nearly one-quarter (23.6 percent) of cigarette smokers in the Bay State were 18-24 years old. By 2017, that number had plunged by a whopping 68.6 percent. Just 7.4 percent of cigarette users were under age 25 — an all-time low.

But then, youth smoking began to rebound, shooting back up to 10 percent in 2018 before leveling out above the previous lows. A state that had led the way in reducing smoking among young people is suddenly getting left behind as rates in other states continue to fall.

Massachusetts launched a war on vaping.

The year 2007, when the Bay State’s numbers began their decline, is also the year e-cigarettes were first introduced to the U.S. market. But around 2014, Massachusetts municipalities began enacting a patchwork of local flavor bans. In 2019, a statewide ban on flavored vapes took effect, followed in 2020 by a ban on flavored cigarettes — including menthol.

While there are many variables that go into personal choices and purchasing decisions, particularly involving nicotine products, I believe there are some notable numbers in this data. In the years after the e-cigarette market emergence, smoking rates among young adults nationwide fell to all-time lows and in most states, remain there. This is why the Massachusetts numbers are instructive.

More notably, in 46 states and Washington, D.C., smoking rates among 18 to 24-year-old current smokers dropped even more significantly in the decade after e-cigarettes’ market emergence than in the 10 years after states sued tobacco companies through the Master Settlement Agreement. This is also contrary to the false premise, unfortunately being spread by alleged public health advocates, that youth vaping leads to youth smoking.

In a perfect world where nobody smoked, drank, or used recreational drugs, the goal of ending all nicotine consumption might make sense. This is the “prohibition” strategy. You can ask Al Capone how that worked out. Thousands of years of human behavior have shown that some people are going to engage in risky behavior no matter what the government says.

Therefore, a more sensible approach to public health, particularly involving young people, might be to raise the bar on very high-risk behavior (like smoking traditional cigarettes) while allowing controlled access to lower-risk products, like vaping and heat-n0t-burn tobacco products. This is known as the “harm reduction” strategy.

Unfortunately, since then-U.S. Surgeon General Jerome Adams mistakenly declared a “youth vaping epidemic in 2018,” tobacco harm reduction has been on the defense. In fact, advocates of safer tobacco alternatives have been constantly fighting against a barrage of misinformation with anti-vapers relying on debunked claims about popcorn lung and formaldehyde.

Studies have found similar results in local flavor bans. For example, in April 2018, San Francisco banned the sale of flavored e-cigarettes. This would be followed by a total ban on vapor products in 2020. An April 2020 study in Addictive Behavior Reports examined the impact of San Francisco’s flavor ban on young adults by surveying a sample of residents aged 18 to 34 years. Although the ban did have an effect in decreasing vaping rates, the authors noted “a significant increase in cigarette smoking” among participants aged 18 to 24 years old. Worse, smoking rates among youth have actually increased in the wake of the ban.

As for banning vaping because it’s a gateway to tobacco use, there isn’t any real substantial data from the CDC’s population surveys to conclude that youth e-cigarette use leads to smoking. In 2017, among U.S. high school students, 42.2 percent reported ever trying an e-cigarette and only 28.9 percent reported ever trying a combustible cigarette. In 2018, among current adult smokers in the U.S., only 13.2 percent were 18 to 24 years old. In 2019, this fell even further to 11.9 percent.