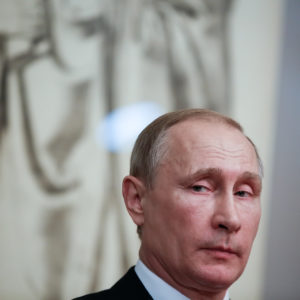 In War on Intel Agencies, Trump Is Hurting Himself

Donald Trump, once he’s president, has every right, indeed obligation, not to take the Intelligence Community’s assessments at face value. But it’s problematic to do so before becoming president and do so, so publicly and aggressively.

There is plenty of history to back up Trump’s skepticism about intelligence agencies’ judgments. The president-elect likes to cite the intelligence failure concerning Iraq’s weapons of mass destruction in the lead-up to the 2003 Iraq War. But he could just as easily have noted the failure before the first Gulf War to know just how close the Saddam Hussein was to developing a nuclear weapon.

And one could easily add other significant misses: the Cuban Missile Crisis in 1961, the fall of the Shah of Iran, the Soviet invasion of Afghanistan in 1979, Saddam’s decision to invade Kuwait in 1990, the collapse of the Soviet Union in 1991, and so on. The fact is, intelligence is difficult work and understanding the secret workings and plans of adversaries is rarely predicated on rock-solid information. “Slam dunks,” as former CIA Director George Tenet once infamously said about Iraq’s WMD program, are few and far between.

But skepticism also means keeping an open mind — even to information that might very well be unwelcome or contrary to one’s first instinct.

A president-elect has an immense amount to do before he occupies the Oval Office. Standing up a new administration and setting policy priorities is a huge and complex task, but it’s where a president-elect needs to focus if it is to be done effectively. Picking fights with a major bureaucracy during a transition is a waste of energy that could be better directed elsewhere.

Moreover, lest we forget, a president-elect is just that. We have one chief executive at a time, and, whether one agrees with his policies or not, the Constitution created a “unitary” executive to avoid the confusion of having multiple chiefs, multiple voices attempting to guide the day-to-day policies of the government. Donald Trump might, in an echo of Teddy Roosevelt, very well enjoy the use of the Bully Pulpit, but he’s not standing there yet.

Trump would be advised to remember Roosevelt’s other admonition to “speak softly and carry a big stick,” especially if he has in mind, as has been reported, a significant overhaul of the Intelligence Community. Picking a public fight over the specific issue of whether Vladimir Putin and the Russians were behind the hacking into the emails of the Democratic National Committee and Clinton campaign chair John Podesta may result in his proposed reforms, no matter how reasonable, being seen as part of a vendetta. This is particularly true since Trump clearly views the intelligence reports about Russian hacking as aimed at discrediting his election.

In years past, it was said that the Intelligence Community was the “eyes and ears” of the president. That is, it uniquely served the president. This, of course, was never simply the case because the Intelligence Community also served the rest of the executive branch, including the State Department and the Pentagon, among others, and also because the intelligence agencies were not the only conduit of information to the White House.

But this diversity of reporting and audiences is even truer today with the advent of the congressional intelligence committees and the changing ethos that the community also serves the needs of the Hill. As a result, when a president picks a fight with an intelligence agency, that same agency will likely have sympathetic ears elsewhere. A fight might be called for, but it’s no longer mano a mano and, unless a president is certain he’s in the right, he’ll be creating even more obstacles to carrying out his security plans and putting doubts in his own backers about his competence to be chief executive.

Finally, soon after being ensconced in the White House, President Trump will discover that he needs intelligence support for carrying out a new policy initiative or convincing reluctant allies that his strategy for doing x, y or z is based on sound information. Having so publicly challenged both the soundness of those products and the character of the agencies themselves, he will have undercut his own efforts by giving the unenthused a ready excuse for ignoring or frustrating his own policies.

In short, a president has every right not to assume intelligence is the gospel truth. But it matters a great deal how and when that wariness is expressed. Otherwise, a president is shooting himself in the foot.