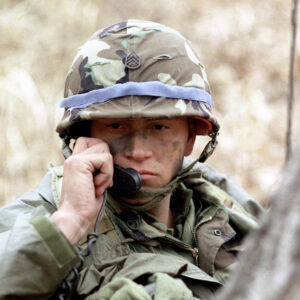 A squad leader of Co. B, 1ST Bn., 14th Inf., 25th Inf. Div., maintains radio contact with his company while participating in an ambush during a joint U.S./South Korean Exercise
[IS] Opinions

Wargames and the Mixed Message Behind Them

South Korea is putting out one of the crazier pleas in the history of warfare. It’s saying to the North Koreans, in effect, please don’t mind if we play war games with your enemy the Americans, no hard feelings, doesn’t mean a thing, they’re making us do it.

That’s the inference of the appeal from the unification ministry calling on the North Koreans to be “wise and flexible” in their response to what the ministry is careful to call the “scaled-back” nature of the ongoing games. Just because the commands of the two historic allies, the U.S. and South Korea, are talking to one another on computers, the South wants the North to know, doesn’t mean we hate you. Sure, they may be marshaling forces, staging strikes, invading your territory on computer screens, but it’s only a game, all in fun, don’t take it personally.

Whether the North takes offense or shrugs off this annual ritual of joint war games, there’s no doubt the U.S. and South Korea are compromising themselves by limiting the exercises to command functions. You don’t have to be a military expert to know that troops have to play games in the field, on the ground, in the air, and at sea to be ready for anything. Heaven help us if the North Koreans were to marshal invasion forces as in 1950 or mount an isolated attack for a limited goal such as the sinking of the Cheonan nearly a decade ago.

You also don’t have to be a North Korea expert to know the North is in no position now to invade anything. You can justify the decision to downplay the games considering that Kim Jong-un has been berating his ministers about conquering economic difficulties. It’s even got to the point where North Korean ministers have had to acknowledge and apologize for their errors.

Surely these beleaguered bureaucrats, not Kim or his father, Kim Jong-il, or grandfather, regime founder Kim Il-sung, must take the blame. Hopefully, none of these people, who must go around in constant fear of wrath from on high, have been imprisoned or executed, but you never know. The Kimster in the nine years and three months since he took the reins after the death of his father should have focused much earlier on economic reform rather than squander resources on nukes and missiles. Still, rocked by sanctions and COVID 19, the Kim dynasty is sure to survive as it’s been doing in the face of recurrent predictions of its demise ever since the tremendous suffering inflicted in the Korean War.

The emphasis on economic reform doesn’t mean, though, that Kim has gone through an epiphany, preaching his version of the “sermon on the mount” while discarding old bad ways. The International Atomic Energy Agency boss, Rafael Mariano Grossi, reports Kim’s scientists and engineers have gone ahead building warheads and the missiles on which to send them anywhere from nearby targets in South Korea and Japan to the U.S. Nobody in his right mind thinks Kim is going to give up his precious nukes and missiles no matter what “pet formulas” are devised by assorted diplomats, professors, and think tank analysts for forcing him into acquiescence.

That reality, however, still isn’t sinking in among those who dream of kissing and making up with the North Koreans. Scaling down the games, we’re told, is all in keeping with efforts “to establish stable and lasting peace on the Korean Peninsula.” Talk is talk, but does anyone believe Kim is going to walk the walk?

North Korea, immersed in its own winter war games involving tens of thousands of its 1.2-million troops, may not have the means to attack the South, but it’s highly unlikely scaling back the South Korea-U.S. war games will make the slightest difference. Kim obviously wants a complete halt to cooperation between the two allies along with the withdrawal of almost all U.S. troops from the South.

North Korea may fire off rhetorical barrages, maybe test-fire a missile or two, but Kim cannot really do much more than that. Rather than scale back the exercises, the U.S. and South Korea should have exploited North Korea’s weakness by ramping them up, sending tanks and troops under cover of fighter planes, rampaging through hallowed training grounds south of the Demilitarized Zone as they were doing a few years ago.

Kim would then have had something to think about, maybe even consider serious talks on scaling back his own defenses, including his nukes and missiles.