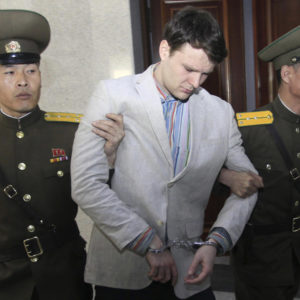 In this March 16, 2016, file photo, American student Otto Warmbier, center, is escorted at the Supreme Court in Pyongyang, North Korea. The death last week of American student Warmbier, who fell into a coma after being arrested in North Korea, has raised questions about whether his tour agency was adequately prepared for its trips into the hard-line communist state. (AP Photo/Jon Chol Jin, File)
[IS] Opinions

Warmbier Death Is Just the Latest in Long String of N. Korea Torture

The tyranny of the dynasty that’s governed North Korea since 1945 has never been so obvious as this year while Kim Jong-un, grandson of dynasty founder Kim Il-sung, orders tests of missiles that will someday be capable of carrying warheads to distant targets.

How many of us, however, know about the suffering of the millions who have died in a gulag system that dates to the earliest days of the dynasty, was expanded under Kim Jong-un’s father, Kim Jong-il, — and today remains the final repository for more than 100,000 people accused of anti-state crimes? And who knows about the thousands of South Koreans held for years in North Korea after falling into the clutches of North Koreans for no fault of their own?

The arrest, imprisonment and death of U.S. university student Otto Warmbier should cast a spotlight on North Korean crimes against humanity largely unknown or forgotten by the general public. Rights groups may protest what’s going on, but it’s difficult to comprehend the extent of the suffering inflicted on those guilty of just about anything that offends the ruler and those around him.

The fate of North Koreans suspected of opposing the ruling establishment is draconian. The basic rule is the punishment should fit the crime or the circumstances. The few who have escaped tell of unspeakable acts of torture, of long hours of slave labor, of confinement to tiny cells and, finally, starvation and disease. Executions, in public or in prison, are commonplace.

Nor are those accused of crimes the only victims. Among those held against their will in North Korea are hundreds of South Korean fishermen whose boats were captured in or near North Korean waters. The list also includes the crew and passengers of a Korean Air jet and dozens more, Korean and Japanese, kidnapped off remote beaches.

Fishermen have wound up not in prison but working in coal mines. The pilot and co-pilot of the Korean Air plane that was hijacked on a domestic flight in 1969 have reportedly been training North Korean pilots — though they themselves are not allowed to fly.

Foreigners arrested in North Korea suffer varying degrees of punishment. Until Warmbier was arrested for stealing a propaganda banner as he was about to go to the airport after a routine tourist visit, probably the worst case was that of Robert Park.

A Christian pastor from the United States, Park had crossed the Tumen River from China on Christmas Eve 2009 with a message of “love and forgiveness” urging Kim Jong-il to “stop the genocide.” Expelled 43 days later, he told of abuse by screaming women who injured him in ways he would not discuss when I met him a few years ago and later talked to him by telephone. Park is thought to have been administered drugs that later led him to threaten suicide.

And then, earlier this year, North Korean experts concocted the deadly VX nerve agent that two massage girls were talked into smearing over the face of Kim Jong-un’s half-brother, Kim Jong-nam, in Kuala Lumpur International Airport. They are still on trial in Malaysia, telling how they were told they were carrying out a prank for reality TV.

The death of Warmbier provides a different tale of torture and terrorism perpetrated by one of the world’s most repressive regimes.

Surely nothing as simple as the crime of stealing a propaganda banner would warrant his sentence of 15 years’ hard labor. Initially, after he was seen crying, acknowledging “the worst mistake of my life,” at a staged news conference in Pyongyang a month after his arrest, the assumption was some famous American would bring him home as two former presidents, Bill Clinton and Jimmy Carter, and the national intelligence director, James Clapper, had done for other imprisoned Americans. His offense, however, was presumably far more serious than leaving a Bible around or entering illegally across the Tumen River.

Doctors examining Warmbier after he arrived in his native Cincinnati, comatose but breathing, knew the North Koreans were lying when they said he’d been in a coma after taking a sleeping pill while ill with a rare disease known as botulism. Judging from the damage done his brain, he had experienced something more sinister. The thinking now is that he not only tore down the banner but defaced it, besmirching the image of leaders before whose statues foreign visitors bow respectfully on the first stop of a typical tour.

North Korean experts, skilled in fabricating biological and chemical warfare weapons, evidently were charged with wiping out his memory. Never would he go home talking about what he had done to defile leaders viewed not merely as temporal rulers but as God-like figures. If any good is to come of this tragedy of one young student, it will be to raise the level of awareness of how far this regime will go to enforce its rule.