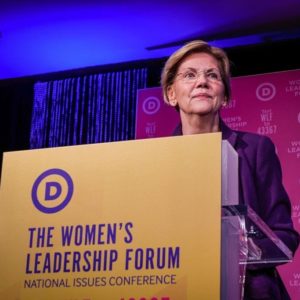 Is sexism responsible for Sen. Elizabeth Warren’s recent slide in the polls? Will her gender-war dust-up with Sen. Bernie Sanders turn around her struggling campaign?

The early polling is unclear. But of all the states where Warren can complain of sexism, the very worst may be New Hampshire.

In 2016, the same night Hillary Clinton won the state’s four Electoral College votes, New Hampshire’s woman governor was elected to the U.S. Senate, giving the state an all-female congressional delegation. There are only two U.S. senators in purple states with an approval rating above 50 percent in the latest Morning Consult poll. Both are women — and both are in New Hampshire.

So when Minnesota Sen. Amy Klobuchar (D-Minn.) says sexism facing women candidates like herself “is so bad,” it’s hard to reconcile with the record of New Hampshire primary voters.

Complaints about unfair treatment of women candidates is nothing new. In 2016, Hillary Clinton’s campaign communications director Jennifer Palmieri said explicitly that “misogyny and sexism were a problem on the campaign trail.” Across the aisle, supporters of Republican vice presidential nominee Sarah Palin pointed out egregiously sexist attacks coming from left-leaning outlets.

Also not new: Studies showing that women candidates succeed or fail at about the same rate as men. It’s true that women are less likely to run — a fact that is evidence itself of sexism, some say — but when they run, they’re just as likely to win as their male counterparts. In 2018, they were more likely.

These facts haven’t stopped the surge of statements, news stories and analysis suggesting that America in general — and Democratic primary voters in particular — are uncomfortable voting for women.

“We have a deeply misogynistic country,” 2020 Democrat Andrew Yang said at a recent Concord, N.H. campaign stop. “I would one hundred percent agree with anyone who thinks the deck is stacked against female candidates because, of course, it is.”

But is that what’s keeping Warren and Klobuchar out of the top of the early-state polls? Particularly an early state like New Hampshire, with three women and an openly-gay man representing them in Congress?

“Keep in mind that the majority of Democratic primary voters in every state, including New Hampshire, are women. They tend to make up 55 to 60 percent of the electorate,” Emerson College Director of Polling Spencer Kimball told InsideSources. In the new Emerson poll of Granite State Democrats released Thursday, Sen. Bernie Sanders and former mayor Pete Buttigieg are on top at 23 and 18 percent respectively, while Warren’s numbers continue to slide.

A year ago, Warren was at 25 percent in the Emerson poll, and last September she was at 21 percent. But since November she’s been stuck at 14 percent, even as her top competitors have been on the rise. Interestingly, it was Amy Klobuchar who got the biggest bump, from 2 percent in the September Emerson poll to 10 percent — and right on Warren’s heels — today.

The case that primary voters are reluctant to back women is also undermined by Warren’s own performance. Throughout 2018, Warren was a frontrunner in both New Hampshire and nationwide. At one point, nearly 30 percent of Democrats were backing her, more than any other candidate. Since then, her support as fallen by half, most of which is attributed, not to misogyny, but to her mishandling of the Medicare For All issue.

That may explain why Warren is both in fourth place overall in New Hampshire and in third place behind Sanders and Buttigieg among women voters.

Kimball says that women candidates do face a somewhat steeper campaign climb, and he says that based on the polling data, the problem is — their fellow women. “Women voters hold female candidates to a different standard,” Kimball said. “Senator Klobuchar is actually getting more support from men than from women.”

“I do think some biases do exist among some people,” New Hampshire Democratic National Committeewoman and former state party chair Kathy Sullivan told InsideSources. “Look at Warren: right after she announced, I had a reporter from a national paper call and ask me if ‘likeability’ would be a problem — a question I never ever hear about male candidates. And Amy Klobuchar — there was the story that she was tough on her staff that got a lot of coverage early on. A similar story was written about Bernie Sanders four years ago by a Vermont media outlet,  and no other media outlets seem to have run with it.”

Jennifer Horn, a former GOP state party chair who ran for Congress in New Hampshire, told InsideSources that sexism is real, though she says it’s not a significant force. Instead, she believes the way women candidates handle sexism is far more important.

“Yes, it was harder to run for office as a woman than a man. But you just have to face it and overcome it,” Horn said. “When we buy into it, or when we complain about it to save our campaigns, it just makes us look weak.

“And this is really a problem for Warren because she already struggles with the authenticity issue. That’s a much bigger problem for her campaign that what Bernie Sanders might have said at dinner.”