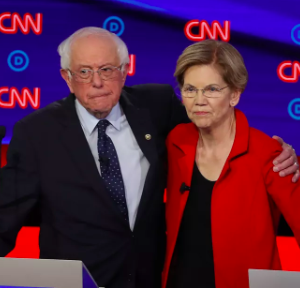 Warren’s ‘She Said, He Said’ Play Will Cause Problems for Progressives

What did Bernie say and when did Warren say he said it?

When this story first broke, it barely qualified as a “dust-up,” though some in the media tried to label it a “brawl.” Compared to Republican presidential primaries, where candidates actually run ads attacking each other, the Bernie Sanders v. Elizabeth Warren slap fight sounds like two NPR hosts debating how to pronounce “assuage.”

Until Liz Warren decided to light it up, that is. And now, in classic Warren fashion, she’s the one who’s likely to lose.

A recap: CNN ran an anonymous-source-laden article claiming that during a hush-hush, one-on-one meeting between Warren and Sanders to arrange a political non-aggression pact (think the Molotov – Ribbentrop Pact, but with two Molotovs), Bernie allegedly blurted out that “he did not believe a woman could win.”

“My hair just exploded into flames,” former NH Democratic State Party Chair Kathy Sullivan tweeted. Boston-based Democratic strategist Mary Anne Marsh said, “Women are driving politics and anyone who doesn’t understand that is going to get run over by them.”

CNN even followed up with an op-ed by Jill Filipovic: “Why Bernie Sanders is Wrong About Women.”

Team Sanders struck back, denying the report and flooding social media with hashtags (#ITrustBernie), videos, statements and articles going back to Bernie’s days as the Socialist mayor of Burlington, Vt. saying of course women can win elections.

Bernie issued a definitive statement: “It’s sad that, three weeks before the Iowa caucus and a year after that private conversation, staff who weren’t in the room are lying about what happened. What I did say that night was that Donald Trump is a sexist, a racist and a liar who would weaponize whatever he could. Do I believe a woman can win in 2020? Of course! After all, Hillary Clinton beat Donald Trump by 3 million votes in 2016.”

As the day passed, Warren remained silent. The New York Times and others wrote up the story, all sourced anonymously or through second-hand sources, etc. Warren could have ended the conversation with a simple statement: “Bernie raised the issue of Trump’s sexism and how he might use it against me. I told Bernie I was ready to fight, some folks in the meeting misinterpreted the conversation,” etc. Any competent PR flak could whip up such a non-denial denial in five minutes flat.

Instead, Warren waited until Monday night, and then made everything worse:

“Among the topics that came up was what would happen if Democrats nominated a female candidate,” Warren said in a statement. “I thought a woman could win; he disagreed. I have no interest in discussing this private meeting any further because Bernie and I have far more in common than our differences on punditry.”

Or put another way, “Bernie’s a liar, and I don’t want to talk about it anymore.”

And now there’s a problem. Warren’s statement takes the story from a tale of miscommunication to a test of trustworthiness. One of them is lying, and the fight over figuring out who it is will likely cost one of them support — and at a time when they both can least afford it. Iowa and New Hampshire are just weeks away.

The likely loser in all this? Warren. (And no, not because she’s a woman.)

First, Warren’s the one who picked this fight. There’s little doubt the first CNN story came from her camp. And given the closeness between CNN and the 2016 Hillary Clinton campaign, Sanders supporters will assume the anti-Bernie Democratic establishment is up to its old, dirty tricks.

Second, Warren’s decision to throw down rather than rise above this petty squabble puts progressives, most of whom them both, in an uncomfortable spot. They don’t want to call either far-Left candidate a liar. Warren’s forcing the issue and they’re likely to hold her responsible.

Third, Warren’s already got an integrity problem: Her inaccurate claims of Native ancestry, her less-than-definitive position on MedicareForAll, her outright lie about her children attending public school —the list goes on. Bernie, on the other hand, has the opposite problems: There appears to be nothing so impolitic that he won’t say it out loud, from “Yes, I’m raising middle-class taxes to pay for healthcare.” to “I would have left Saddam Hussein in Kuwait in 1991.”

Finally, and most problematic for Warren, there’s the “woman” issue itself. Warren and her allies constantly claim America is a misogynistic nation where women seeking higher office face a steeper climb than men. If Bernie really did say it’s going to be tougher for a woman to beat Trump than a man, wouldn’t he be quoting…Elizabeth Warren?

Warren’s supporters have boxed themselves in. If Trump’s America really is hostile territory for women as they claim, then doesn’t that fact make nominating Warren riskier than picking her fellow progressive Bernie? If the top priority of Democrats really is, as polling indicates, “beating Donald Trump,” then why would Democrats take that risk?

It’s a difficult issue, one that is now part of the 2020 primary thanks solely to Elizabeth Warren. Her cynical decision to keep this controversy alive (and perhaps garner sympathy from women voters?) is a sign of just how much her campaign is struggling down the stretch.