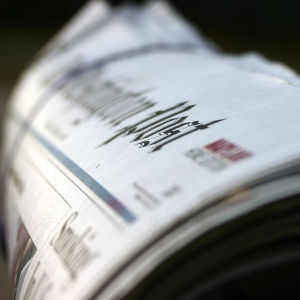 “Do you regret any of your Iraq War coverage?”

“How do you prevent the mistakes of that coverage from happening again?”

“Where has the integrity of the byline gone?”

Those were just a few of the (rather pointed) questions Leonard Downie Jr. fielded last Thursday during a D.C. Public Library appearance to discuss his career and the current state of American journalism.

For the record, the former longtime executive editor of the Washington Post, 73, said that, yes, he regrets not putting skepticism about weapons of mass destruction on the front page ahead of President George W. Bush’s Iraq invasion. He argued that, no, accurate and authoritative reporting hasn’t declined in the age of the Internet. Downie’s no techophobe, yet he did say the Post’s transition from a print newspaper to a multimedia news organization — a change that began during his tenure from 1991 to 2008 — has brought challenges as well as benefits.

In Downie’s view, the most troubling aspect of online media culture is the incentive to post stories as quickly as possible, inevitably leading to inaccuracy in some instances. He worries that the web often rewards shallowness, although he also notes that long-form stories are finding a following online in a way that he might not have expected. That phenomenon is requiring some creative thinking as news consumers increasingly turn to their mobile devices for content.

“It’s easier to read long stories on tablets and laptops than it is so far on phones, but [Post owner Jeff Bezos] is determined to conquer than mountain, too, somehow,” Downie said.

Another change that has resulted from the digital revolution is that, according to Downie, news media professionals are working much harder than they did 50 years ago.

“Literally, when I was a reporter in the newsroom in the 1960s, there came a time of day in the late afternoon when you kind of sat around,” he said. “You read magazines. You read The New Yorker. You gossiped with the people sitting around you. Then around 5:30 or 6:00, you wrote your story, because the deadline was coming up. Nothing’s like that anymore. You’re on duty all the time.”

Asked by an audience member why reporters in the Internet age shouldn’t simply work from home, Downie said he continues to believe in newsrooms as tools for collaboration among colleagues. Still, he noted that there would be some cultural changes in the Post newsroom when the company moves into a new building next year: One of the memos that’s gone out to the staff is: “Stop printing things out, because there’s going to be no room for it. … Get used to reading on a screen.”

Throughout his library talk, Downie reserved his more negative comments for publications other than his own. He knocked the Post’s political reporting competitor Politico in vague terms, saying the outlet was “changing what it’s doing and giving up some of its advantage.”

He also alluded to the fact that he once dubbed the Huffington Post and other aggregation-heavy websites “parasites living off journalism produced by others.” (For her part, Arianna Huffington responded by accusing Downie of “pointing fingers and calling names” while defending aggregation and touting “the value of the link economy.”)

Since retiring from his executive editor post in 2008, Downie has served as a vice president at-large for the Post and taught at Arizona State University. He’s written several books about journalism, and he’s currently finishing another, based in a part on the Reconstruction of American Journalism report he co-published in 2009.

Given that document’s focus on the importance of local news, InsideSources asked Downie about Bezos’s vision for the Post, specifically a “shift toward expanding its national and international audience — in direct contrast to its previous shift to local news,” as reported by the New York Times.

“It’s a smaller Metro staff than it used to be, but it’s actually a little bigger under Jeff Bezos than it was when he came in,” Downie said. “Local coverage is important, and he recognizes it’s important. … But national and international audiences are growing rapidly, and the local audience only grows so much, because it’s finite.”

Speaking of audiences, Downie also mentioned that he’s eagerly awaiting a trip to the cineplex in November. Having supervised the Post’s storied Watergate coverage, depicted in the 1976 movie All the President’s Men, he’s looking forward to seeing another film dramatizing investigative reporting: this fall’s Spotlight, about the Boston Globe’s coverage of a sexual abuse scandal within the Catholic Church.

“All the President’s Men was the only accurate movie about journalism I’ve ever seen in my life, and this may be the second one,” Downie said.