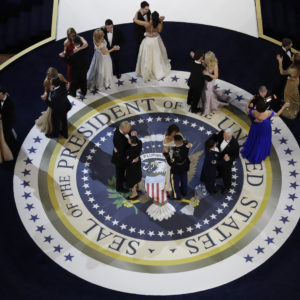 After more than six months of vilifying, ridiculing and laughing out loud at President Trump, Washington is getting down to realizing that he is the president — and he will not be gone, by some miracle, in the morning.

Ergo it is time for companies, lobbyists and Congress to find a mechanism to work with Trump or around him. It might be described as a dance: the perplexity quickstep. Fleet feet are essential.

Business is treading with increasing alarm and tentativeness. Lobbyists are seeking White House sources for steps guidance. And Congress is tripping over new choreography.

A lot of business leaders thought that Trump, himself a businessman, would see government from the Oval Office as though he were still sitting in the corner office. They believed he would seek the best path forward, going for the main chance and strategizing how to get there. Instead, the business community — from the chairmen of some of the largest companies, with whom I have spoken, to those of small- and medium-size companies — is flummoxed, reviling Trump in private and seeking advice from a variety of Washington gurus on what to do going forward.

Business people, who think they understand cause and effect, cannot find a pattern that suggests the president has any understanding of that relationship. Business hankers for certainty, Trump for adulation. Business worries about the bottom line, Trump about the television commentariat. Business people who want to get a point of view across to the president are trying to get on television — particularly on the morning shows on Fox.

The trade associations, among the most effective lobbies in Washington, are working under the old rules while trying to learn the new dance steps. So they continue to “applaud” Trump appointments and to “congratulate” administration policy. Business and its lobbyists truly hope for lower corporate taxes and for loosening of regulations but they worry about the future of trade and trade agreements — and the concept that America can pull back all its overseas commitments. “America First” is a harbinger of bad things to come for global companies.

Many CEOs, including Elon Musk of Tesla, Tim Cook of Apple and some other bold Silicon Valley C-suiters, have criticized Trump and quit his advisory committees. This has earned them public plaudits, but in doing so they have reduced their ability to affect things. Many others ask, “With Trump, isn’t it better to be on the inside, as close to the president as possible?” Trump is said to believe the last person with whom he spoke.

In Washington’s new dance, the hope is that when the music stops, you are the one standing next to him. You cannot do this if you have taken off to California in high dudgeon.

So many corporations with interests in Washington are learning the perplexity quickstep: two quick steps to the right, two quick steps to the left, and circle to the rear. Dance near Trump and he might heap praise on you. Dance far from him and he might come after you for manufacturing overseas. Like his own party and the press, business waits for the new choreography which often arrives by Twitter in the early morning.

This was a week to marvel at the perplexity quickstep: Trump decided on the Deferred Action for Childhood Arrivals Program, or DACA, putting the fate of nearly 800,000 young undocumented immigrants in lawmakers’ hands before undermining the whole effort by tweeting that if Congress did not act in six months, he would insert himself back into the process. Then he danced the GOP right off the floor and cut a deal with the House and Senate Democratic leaders, Nancy Pelosi of California and Chuck Schumer of New York. Dizzying.