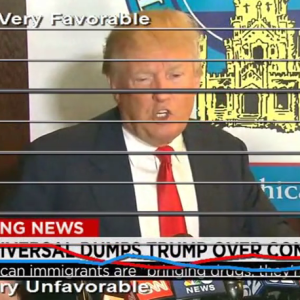 GOP strategists are worried that Donald Trump’s inflammatory rhetoric since entering the presidential race could hurt the Republican Party in 2016. Republican National Committee Chairman Reince Priebus even called Trump to ask him to “tone it down,” particularly his comments on immigration.

New dial testing from Maslansky + Partners, a language strategy firm, in cooperation with InsideSources, shows that the GOP is right to be concerned about the potential reaction to Trump.

“Trump has offended and irritated the nation with his comments one too many times. People now have a viscerally negative reaction not just to what he says, but to him as a person,” said Jenn Dahm Peterson, vice president at Maslansky + Partners.

One clip from dial testing shows Trump responding to the continuing controversies as former business partners distance themselves from his campaign. As Trump brushes away questions about his relationship with NBC, Democrats and Republicans react deeply unfavorably.

Another clip, tested this week, shows Trump delivering a speech before a conservative convention earlier this year. Trump discusses red-meat Republican issues that should evoke a very positive reaction from GOP voters. But Trump’s remarks calling for the GOP to “toughen up” on the IRS, Benghazi, and immigration, failed to excite Republicans in dial testing. Only a brief remark from Trump on Obamacare pushed the billionaire businessman into favorable territory.

Dahm notes that had another Republican candidate made the same remarks, they would have received much more favorable reactions.

Negative reactions to Trump are a growing concern for party strategists. The first Republican debate is less than a month away, and Trump is likely to qualify to appear on the stage as one of ten candidates ranked highest in national polls.

Trump has doubled down on his controversial rhetoric, but he may have more to be concerned with than just his long-shot presidential bid. “At this point, he’s not just destroying his presidential hopes, he’s damaging his brand,” explains Dahm.