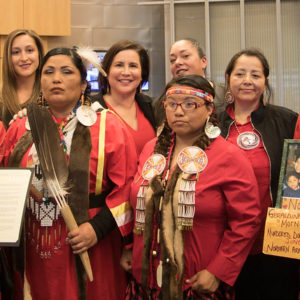 Members of the Seattle City Council proclaim May 5 as the Day of Awareness for Missing and Murdered Native American Women and Girls . (Flickr)
[IS] Opinions

There is a horrific crime wave going on across the United States, but you probably won’t read about it in your newspaper or see it on the national TV news.

And yet no one knows the true extent of the crisis because no one keeps reliable data on it — not tribal police, not state police, not even the FBI. As a result, the problem remains largely invisible for most Americans, and there is not enough information on how and why so many Native women go missing and are killed.

That must end. It is time for our nation, at every level of government, to acknowledge and prioritize a response to these horrifying crimes, to recognize each individual life lost and the growing number who have gone missing.

While hard numbers are difficult to find, there are solid indications of the extent of the problem. In 2018, the Urban Indian Health Institute published a study called “Missing and Murdered Indigenous Women & Girls.” The institute compiled data from 71 U.S. cities and the results were both troubling and frustrating.

The researchers found 506 cases of missing and murdered indigenous women but could not find a root cause for why the numbers are so high. Previous studies found that in some counties, Indian women are murdered at a rate more than 10 times the national average. That’s the horrifying part.

The frustrating part? Because no national government-funded database tracks such cases, getting case information is very difficult. Of the 71 city police departments and one state agency surveyed, 40 provided some level of data, 14 did not provide any data and 18 still had requests pending when the study was published.

As a result, the 506 cases cited in the report are undoubtedly a severe undercount. And most of the known cases have received virtually no public attention in the media. As the report’s authors put it, these missing and murdered women “disappear not once, but three times — in life, in the media and in the data.”

On Feb. 17, the American Bar Association said enough is enough.

The ABA House of Delegates — the association’s policy-making body — called on Congress to enact legislation to create a national database of missing and murdered indigenous women; require the federal government and states to collaborate with tribal nations on the issue; train tribal law enforcement agencies to investigate these crimes; and fund tribal justice systems to prosecute murderers and kidnappers when they are apprehended.

Unnecessary barriers between tribal, county, state and federal authorities also must be eliminated. It is hard enough to investigate and prosecute cases within one jurisdiction. It is infinitely harder when police and prosecutors have different jurisdictions or authorities.

There have been some national efforts to address the problem. Last year, three U.S. senators — Catherine Cortez Masto (D-Nev.), Jon Tester (D-Mont.) and Lisa Murkowski (R-Alaska) — introduced the Not Invisible Act of 2019, which would create an advisory committee of local, tribal and federal authorities to recommend practices to fight the epidemic. It is pending.

Another Senate bill called Savanna’s Act would improve the federal government’s response to missing and murdered Native women. Named for Savanna Lafontaine-Greywind, a pregnant woman who was killed in North Dakota in 2017, this bill is also pending.

The White House also has acted. In November, President Trump created a task force to work on the issue. At the same time, Attorney General Barr announced the Missing and Murdered Indigenous Persons Initiative, which will provide $1.5 million for coordinators in 11 states to assist with these types of cases. The initiative also will offer FBI help, when needed, improved data collection and analysis, and training for local responders.

This is a good start — but far more needs to be done. As a nation, we must pay greater attention to the Native women victims who are now largely forgotten.

Their blood and pain cry out for justice.

Judy Perry Martinez is president of the American Bar Association. She wrote this for InsideSources.com.