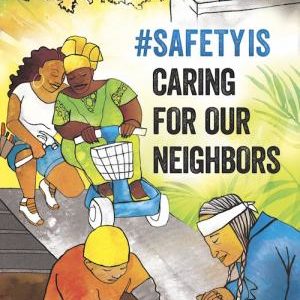 We Can Create Public Safety Beyond Police

While visiting his family during winter break, 19-year-old Quintonio LeGrier was shot and killed by Chicago police as law enforcement responded to a 911 call from Quintonio’s father reporting that his son was threatening him.

Quintonio was attending Northern Illinois University and studying electrical engineering. Reports say that the college student had been emotionally disturbed in recent months. A lawsuit filed by the LeGrier family against the shooting officer states that police failed to give Quintonio medical care.

This is sadly what often happens when police are the first responders in situations involving people suffering from mental health crises. In 2018, police shot and killed 213 people who suffered from some form of mental illness, according to data from the Washington Post.

Conversations about safety are often centered on crime and fear, police and punishment. Online videos have proven to a growing number of people what black and brown communities have known for too long: that calling 911 will often increase danger when cops trained to react with force become involved in a crisis situation. Imagine what our communities could look like if we had the resources to redefine what safety is for ourselves, our families and neighbors — having a living wage job, healthy food, affordable housing and health care.

Safety does not begin with police; safety begins with building healthy communities. Emergency calls and conflicts in our communities are oftentimes responded to with unnecessary force and policing. It is clear that police are not equipped to respond to crises in hopes of de-escalating conflict, or in situations involving people with disabilities or suffering from mental illness.

We need to create public safety that is less focused on fear and that involves taking a new approach to how we respond to conflict in our communities. Addressing crises from a public health response can help save lives and keep our communities safe.

Where we focus our resources reflects our priorities. In Oakland, California, right now, there is an effort to redirect 911 calls to dispatch a variety of first responders besides the police. Programs that apply Crisis Intervention Team protocols, such as Cahoots in Oregon, can provide mental health providers, referral services and treatment alternatives in response to a crisis.

Cities should also continue funding programs like 211 and 311, alternate assistance lines that direct callers to social services and other resources. Investing in resources that help address issues of homelessness, mental health and incarceration can prevent these situations before they escalate into crisis.

We can all play a role in creating public safety for our communities by engaging with each other, strengthening our relationships and resolving conflicts constructively. We, as citizens, can engage as first responders to issues that arise in our communities. Night Out for Safety and Liberation is an annual event that was created to bring people together and build a world where police aren’t the first resort for resolving conflict.

Held on the first Tuesday of August as an alternative to the police-centric National Night Out, the event was started six years ago by the Ella Baker Center for Human Rights in response to the shooting death  of Trayvon Martin by a neighborhood watch captain in Florida. Since its inception, participation in Night Out for Safety and Liberation has expanded to more than 30 organizations across the country and the conversation about safety continues to grow. In 2018, neighbors in 30 cities came together to redefine what safety means to them.

Tracey Bell-Borden, who attended last year’s event in Oakland, says, “Love in Oakland is what safety means to me. To know that we as a community can come together and actually deal with the problems that are going on — the end of mass incarceration, the end of this for-profit bail, the end of the miseducation of our children in Oakland.”

On August 6, 2019, people across the country will come together to reimagine what #SafetyIs. Through investing in the resources we need and changing the way we respond to crisis, we can build up our communities to be healthier, safer and to thrive.

Zachary Norris is the executive director of the Ella Baker Center and co-founder of Restore Oakland, a community advocacy and training center in Oakland, Calif. He is also a co-founder of Justice for Families, a national alliance of family-driven organizations working to end youth incarceration epidemic. He wrote this for InsideSources.com.