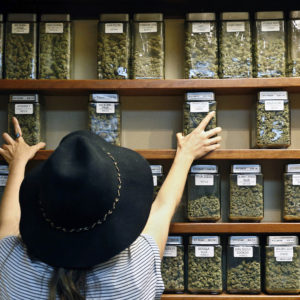 Paradoxically, many states that have legalized marijuana bar ex-offenders with drug convictions from maintaining employment within the industry.

Proponents of those bans hold that they are necessary to legitimize the industry and help prevent illegal sales. However, by allowing the industry to employ those with prior drug-related offenses, states can promote employment among the formerly-incarcerated, all while bolstering their economies and helping a budding industry mature.

Decriminalizing a product that was once prohibited, then allowing businesses to grow and sell that product, has created a unique conundrum. Those who refrained from marijuana cultivation or use because of prohibitive laws know less about the product, while individuals who have marijuana-based convictions have invaluable knowledge, especially if those convictions involved cultivation. Yet regulatory schemes in states where marijuana is legal allow the former to enter the industry, while making it difficult or impossible for the latter to become licensed retail operators.

As Anne McLellan, Chair of Canada’s Task Force on Cannabis Legalization and Regulation, stated, “There’s an awful lot of expertise that’s outside the legal system right now and you wouldn’t want to lose all that.”

Supporters of the regulations argue that they are necessary to ensure this new industry is perceived as legitimate, rather than an odd extension of the black market. However, national polling shows that the majority of Americans support marijuana legalization, suggesting that they already find the marijuana industry legitimate. In fact, state officials in Colorado reported that 70 percent of the estimated demand for marijuana is being met by the legal market. Rather than harming the industry’s credibility, making employment in the legal market more accessible would help validate legal marijuana businesses because involvement in the black market would proportionately decrease.

Additionally, bans on hiring ex-offenders with marijuana convictions disproportionately hurt minority communities. The American Civil Liberties Union (ACLU) has reported that while “[m]arijuana use is roughly equal among Blacks and whites,” in states where marijuana is outlawed, “Blacks are 3.73 times as likely to be arrested for marijuana possession.”  This reality, combined with the new regulations, has allowed wealthy entrepreneurs – often white men – to monopolize the industry, while ex-offenders – largely people of color – are denied opportunities. Barring ex-offenders from working in the retail market based on arrests or convictions of non-violent drug offenses only continues the racism associated with prohibition.

With this disparity in mind, Massachusetts has developed an arrangement that should become a model for the rest of the country. The state legislature passed laws to give priority review to people in communities that have been disproportionately impacted by the enforcement of laws prohibiting marijuana sale and use. Specifically, business applicants who are applying for licenses will be eligible for special review if at least 51 percent of employees have a prior drug-related conviction. The Massachusetts framework allows private employers the autonomy to choose to support reentering ex-offenders and allows those with prior drug-related convictions applying for jobs to lend their specialized knowledge to a legal business.

Amanda Reiman, manager of marijuana law and policy for the Drug Policy Alliance, is launching a similar project in Oakland, California. As she observes, “We want people who were formerly involved in cannabis to stay involved in cannabis … That would help them build a future for them and their families.”

In a market where manufacturing jobs are slowly, but continuously declining, the retail and medical marijuana markets will create more than a quarter of a million jobs by 2020. Ex-offenders reentering the job market have looked to manufacturing and blue-collar jobs in the past, but the decreasing number of opportunities in this field make the marijuana industry an appealing, and fitting, alternative for ex-offenders looking to become productive members of society.